Banger Does Britain – The Route

What has been billed by none (well, by one if I can count myself) as the greatest motoring adventure of 2011 happens this Wednesday, 27 July. It’s called Banger Does Britain and if you’re late to the party and this is the first you’ve heard of the monumental event then firstly, where were you and secondly, you can read all of the back story here. 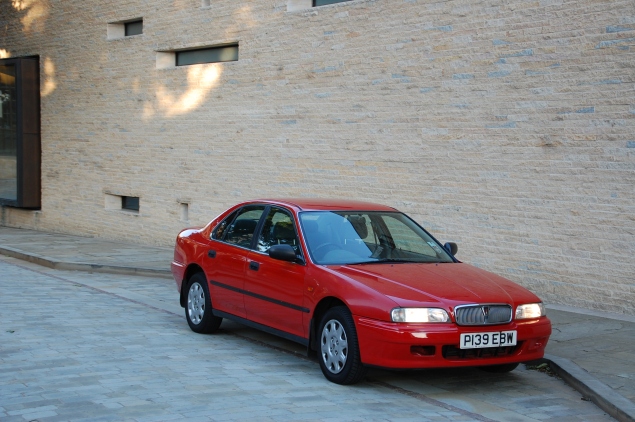 I’m pleased to report that the trusty banger, an unmodified (vinyl appliqués aside), unglamorous Red Rocket of a Rover 620Si, has now delivered over 700 miles of driving enjoyment since I picked it up a month ago. This included a splendid late night return dash from Lincoln to Silverstone.

Residents of Lincoln may well have been lucky enough to catch a glimpse of it as it cheated traffic jams and lurched forwards with the prowess one grows accustomed to from a 4-speed automatic gearbox.

The driving team of my brother-in-law, Trevor Mole (an excellent builder if you’re in the Lincoln area) and I know not what the adventure will bring, other than a gradually more masculine-scented car interior, frequent visits to roadside services and frustration as the clock ticks down its 24 hour challenge. Think of us not as a latter day duo such as Sir Stirling Moss and Denis Jenkinson, or even Colin McRae and Nicky Grist, but rather Philo Beddoe and Clyde in Every Which Way But Loose.

Much debate has taken place over the past week or so about exactly which route to take and indeed, below is only an indication should any of you be actually serious (or mad) enough to wave from motorway bridges or even drive in convoy for a spell. We’ll be guided by satnav as well as the routes shown below.

So, will Banger Does Britain be going anywhere near you?

Now, the astute among you will have noticed two things. Firstly, the approximate total distance to be covered is 1229 miles – naturally a log will be kept from the car to compare with. Secondly, the estimated time to cover this distance is 25 hours and 43 minutes… Oh. The plan is for 24 hours so let’s hope this is just a very cautious TomTom that doesn’t understand the magnitude of the task in hand.

Updates will be posted as frequently as possible on the Wednesday and it’s great knowing so many of you are interested in supporting Banger Does Britain. Wish us luck!