Hard to believe we’re now over twelve years and three generations into life with Toyota’s Yaris B-segment model, but a quick look over the generations illustrates how things have changed for the world’s biggest car manufacturer and its supermini.

The first Yaris went on sale in 1999 and was awarded the prestigious European Car of the Year Award. It was distinctive, with very cutesy styling and a modern, space-age interior. The pudgier Mk 2 went on sale in January 2006 and carried on almost all of the styling themes of the original, just in an inflated manner. There was little originality but fans of the first version remained loyal. But the third generation is seeking to break new ground for the Yaris nameplate. Like many cars from rival brands, it’s bolder and more aggressive in its stance. The appeal should be younger and more unisex than before. 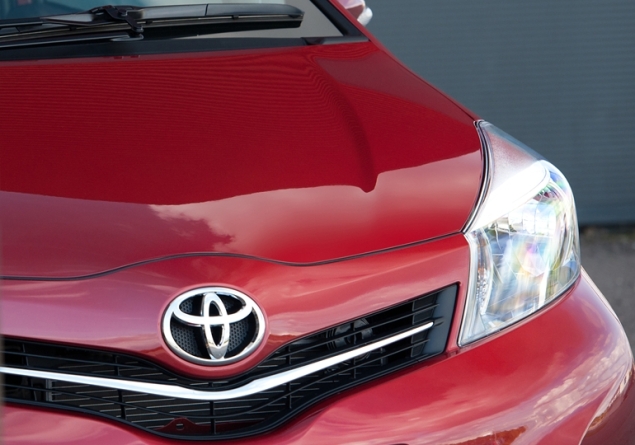 Certain styling themes have been carried over, such as the double concave front grille slot, but here it’s narrower and more aggressive with a chrome blade filling the slot. The headlamp shape is a big departure and while the angular look is more in keeping with its contemporaries within the Toyota line-up, it’s no longer a friendly expression. The rising belt-line styling cue remains, giving an impression that the car is moving forwards when stationary, but the glasshouse shape is also sportier: by being more diamond-like in shape, the side windows now draw your gaze forwards.  The previous trapezoidal ones pointed skywards and emphasised the Yaris’ height whilst also making it look stubby. The rear aspect is the one which will be the most familiar to the Yarisati – that ‘Y’ shape of body coloured graphic that forms the lower tailgate and reach onto the rear haunches over the tail lights.  So a mix of old and new to keep the faithful loyal whilst broadening the appeal to persuade others to visit their local Toyota showroom. 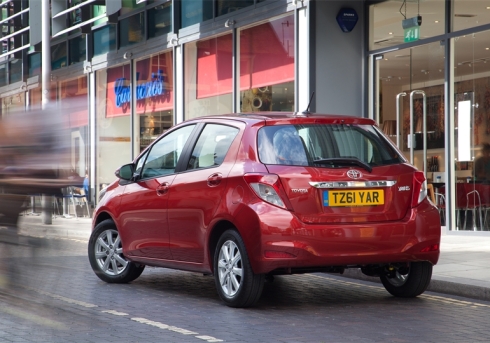 The rear aspect looks the most like previous generations of Yaris

The launch powertrain range is much as before, kicking off with the 3-cylinder 1.0 petrol with a manual 5-speed ’box (68bhp, 96mph, 58.9mpg and 111g/km CO2). The 1.33 4-cylinder petrol tested here, comes as a 6-speed manual (98bhp, 109mph, 51.4-52.3mpg and 123-127g/km CO2) or, with Multidrive S (figures below), a CVT automatic which can be converted to a 7-speed sequential ’box using either the gear lever or paddles behind the wheel. Frankly, in most cars where such manual overriding is offered, there’s little satisfaction in their use. Most will leave the lever in ‘D’ and be perfectly happy. Unusually for an automatic, it’s more fuel efficient and produces less CO2 than the manual but is rather vocal above 3000rpm. Finishing off the range is the common-rail 1.4 D-4D model, proving to be a little gruff in engine note compared to rivals, but with decent performance and economy achieved via its 6-speed manual transmission (89bhp, 109mph, 72.4mpg and 104g/km CO2). The real news in both fuel efficiency and emissions output will go on sale next year when the Yaris Hybrid is launched, based on the 1.33 Multidrive S tested here.

There are four flavours of Yaris in this third generation model. Entry level T2 models are limited to the 1-litre engine offer a reasonably comprehensive equipment count for the money.  Two thirds of sales are expected to go the way of the TR grade, available with all engines and featuring 15” alloys, aircon, leather steering wheel and gear knob, body coloured mirror housings, Vehicle Stability Control (VSC) and traction control. A sportier theme, if not outright performance, comes by way of the SR. Exclusively with the 1.33 engine, the ride height is lowered by 10mm, alloys grow an inch, rear spoiler and front foglights are added, as is darkened exterior trim and rear privacy glass. T Spirit models, also only available with the 1.33 unit feature a glass roof, dual zone climate control, automatic headlights and wipers and keyless entry and ignition. The range kicks off with the 3-door T2 1.0 VVT-i at £11,170 rising to £15,385 for the automatic T Spirit driven here, with 12 other grade and engine combinations in between.

The interior has undergone a huge conceptual change from the first two generations, moving to a conventional binnacle of analogue instruments in front of the driver, rather than being centrally mounted – digital and in that deep cavern on the original model, of course. Nevertheless, it’s quite a distinctive dash though, just much more ordinary than before. That said it’s more resolved and interesting in its style than those of the related Verso-S and the slightly larger Urban Cruiser. 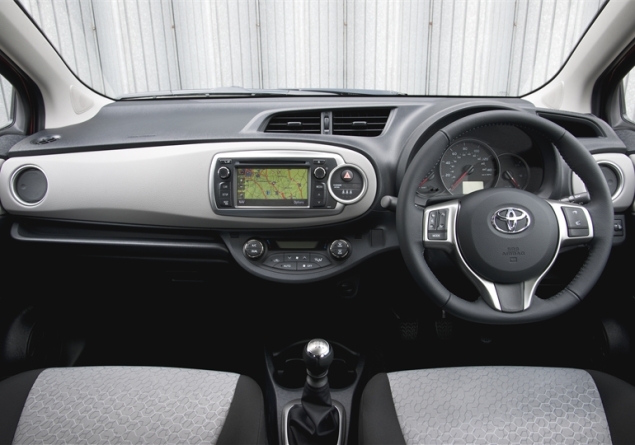 The darker sections of the interior continue with the hard plastic policy that knocked some of the edge off the allure of previous Yarises too. It’s a pity when rivals are so well-versed with squidgy slush mouldings in the B-segment. The finish of it, at least, doesn’t fall into the traditions of a faux leather-look, instead featuring a mass of parallel thin grooves, somehow looking like the fur of a pampered pet.

Stowage spaces on the dash itself aren’t numerous. One on the top right is handy for phones, while there’s a vestigial shelf above the decently-sized glovebox, but it looks more like a design feature than something of use. More useful cubbies and drinks holders are located in a floor mounted console, although they’re a bit of a stretch to reach them while on the move.

It’s all very well constructed though and Toyota is rightly making much of the improved quality of production and processes, including greater supplier integration, at its Valenciennes production facility where European models are sourced from. Fit and panel gap tightness are exemplary.

The dials within the binnacle are large and clear with neat graphics, featuring a circular printed motif on them. The dash is broken up by a paler contrasting propeller shaped extrusion, which is softer-touch and patterned with a relief of tiny rhombuses. This also houses Toyota’s excellent infotainment system, Touch (or Touch and Go with satnav) and is standard on all models. It’s a doddle to use, featuring a 6.1” widescreen, touch sensitive display and easily connects to modern smartphones, connecting via Bluetooth to access contact details, SMS and Google local search. Even music functionality connects wirelessly allowing your iPod to be accessed without an unsightly white cable strewn across the cabin like a length of techno-spaghetti. The screen also doubles as the display for the reversing camera, a feature that’s not necessary on a car with good all-round visibility, but provides a bit of surprise and delight when you snick the gear lever into ‘R’. On models where the Go satnav function is installed (free on TR, SR and T Spirit models for the first six months, a £500 option thereafter), drivers get to experience a very clear and effective guidance system. This isn’t just a good package on a small car, it’s a good package full stop.

The T Spirit model tested features a panoramic glass roof making the cabin feel light and airy, aided by a dark and light grey contrasting seat trim to mirror the colours used on the plastic mouldings. Those lighter centre panels feature a honeycomb pattern that wouldn’t look out of place on Blockbusters. The interior’s a spacious place to be, just not quite as appealing to fingertips as it is to the eyes. My only gripe on a small car that, in T Spirit guise, majors on comfort, was the omission of a front centre armrest. A simple fix surely for future model year updates?

The new Yaris is just 100mm longer than the previous model, at 3885mm, yet significantly more cabin and boot space has been liberated within the compact footprint, making it one of the roomiest in the supermini class. The luggage area is 286l is good for the class and naturally it can be extended by tumbling the split/fold rear seat. Width remains the same while height has dropped 10mm. The biggest change is in structural rigidity – due to a construction incorporating a greater proportion of aluminium and high tensile steel, it’s both more resilient and approximately 20kg lighter than the outgoing model.

That greater torsional rigidity pays dividends in making the car stronger for both better crash protection, supplemented by seven airbags and targeting 5 Stars in the Euro NCAP testing, as well as offering the potential to make it more of a driver’s car. It’s also more aerodynamic, featuring lots of under body tweaks to compliment those on the surface. This includes an under-engine panel and NACA ducts towards the rear of the undertray, aiding both performance and efficiency.

As part of Toyota’s drive for a more youthful audience for the Yaris, enhancements and changes have been made to take advantage of the stiffer chassis. Current Yaris drivers will find the transition to be sportier in nature of its set-up than what they’re used to. It also brings the Toyota nearer to the road manners of the Fiesta, arguably the B-segment’s benchmark for handling.

In terms of the Yaris experience at higher speeds and on back roads, it feels secure and surefooted, much like a car of at least a size above. It’s stable, not susceptible to crosswinds and rode comfortably with no float as it traverses undulations at speed. That stiffer chassis package is also obvious at urban speeds. It’s not uncomfortable but asphalt ripples and imperfections are more noticeable than one might expect, feeling slightly under-damped. One would assume the SR version, with the bigger wheels and short springs would highlight this yet further. Presumably Toyota’s painstaking market research has led it down a similar path to rivals and suggests buyers like more sporting chassis set-ups.

The steering of UK-market models features a quicker rack than their European siblings, providing a sharper turn-in response and theoretically greater involvement for enthusiastic drivers. It’s true that it responds quicker and with greater feel than both the previous model and the Verso-S as reference points, but whether it’s engaging enough to tempt buyers away from rivals’ models is debatable.  Front suspension is via MacPherson strut with a torsion bar at the rear, in a set-up designed to offer greater agility. The Yaris does provide safe, predictable handling, heading towards understeer when pushed hard, as most front-drivers tend to, in a package that will be more broadly appealing than Yarises of old. It now feels much more tuned specifically for European rather than global tastes and this can only increase the sales potential. The brakes provided progressive stopping power and a positive amount of feel through the pedal, comparable to other superminis, but spotting drum rear brakes on the specification sheet suggests cost-cutting rather than product optimisation for a 2012 model year car. 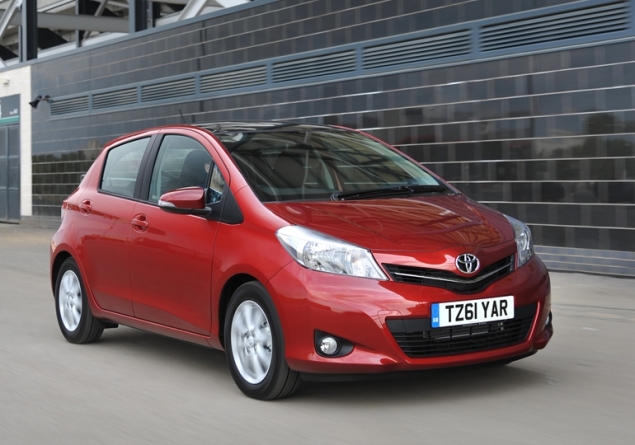 New Yaris is on sale now

The new Yaris range is available to order now with deliveries scheduled for early September. Buyers can expect to find the third smallest Toyota in their current range to be more sophisticated with a broader range of abilities than its predecessors to take the challenge closer to that of the market leaders. Backed by Toyota’s 5 Year/100,000 mile warranty, high levels of equipment including the excellent Touch and Go, it’s an attractive package. A pity some of the cuteness got lost along the way.