In the latest edition of Tomorrow’s Classics, Amy Littlejohn talks about her passion for Ford’s Fiesta, especially her Mk I XR2, the first of a long line of small sporting hatches from the Blue Oval. Amy lives in Somerset and has several other cars at her disposal, but her main daily driver is a limited edition Mk VI Fiesta Black. 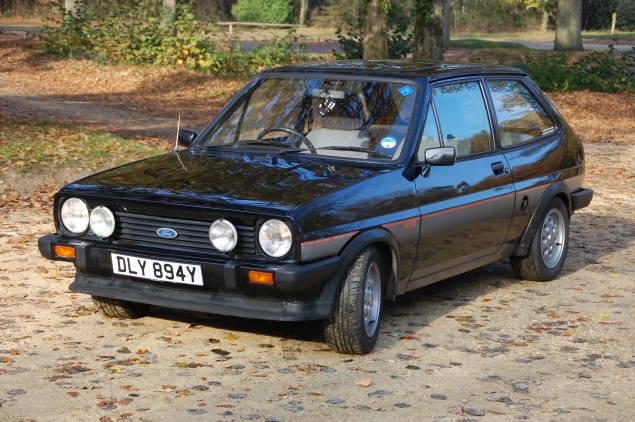 “I didn’t have a long and burning desire to get into classic car ownership, but a visit to the Classic Ford show in 2010 awoke my passion for older Ford Fiestas.

When I visited the show I had a Mk VI Fiesta ST as my daily driver. It was fun, fast, looked purposeful and I’d worked hard to be able to afford it, so thought ‘why not?’ But that show visit changed something in me. I’ve owned lots of cars but generally speaking, they’d got better, newer and faster every time I replaced one. But now, seeing all those crisp and now rare Mk I Fiestas, a fondness in me was reignited for the original, squared off small Ford.

My first car after passing my test was a Mk I Fiesta, a lowly 1.1 L model. I say lowly but it felt bloody fast at the time and handled well too. I swear it was the fastest 1.1 Fiesta ever built! So, after I’d taken leave of my senses, I decided I’d sell the ST, buy another Mk I of some variety and buy a newer car to run as my daily wheels. 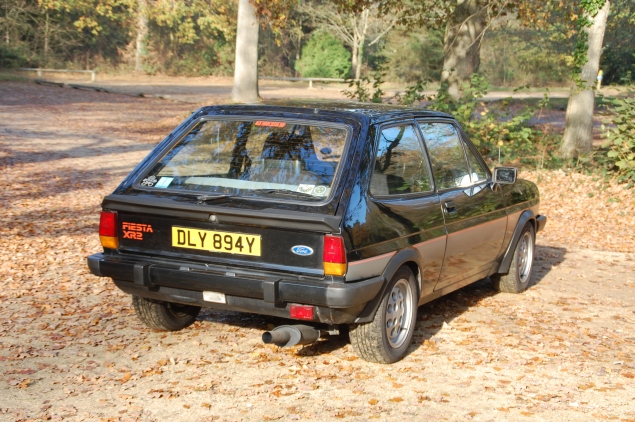 Initially all that was important was that it was the original 1977-83 vintage Fiesta – I wasn’t really bothered which model I went for, but the more I looked into it, the more I realised that I really wanted that boy racer’s dream car of the early 1980s – the XR2.

Like many classic cars, XR2s fall into three categories: sheds that are best avoided; mint examples that are perfect but are priced accordingly; and generally good examples at reasonable money, that require a few odd jobs on them to bring them up to scratch. This was the sector I’d be looking for one from. 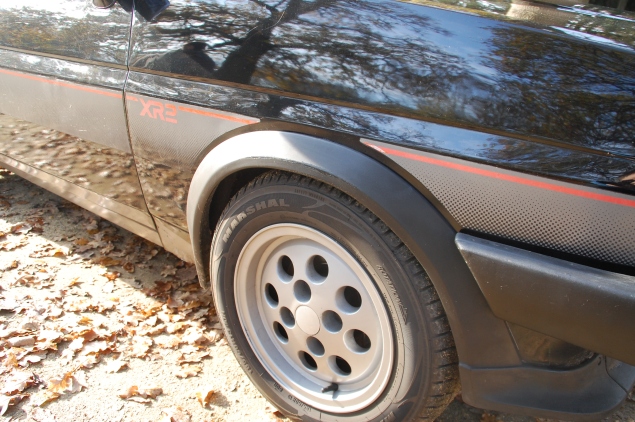 Front wings and vinyl stickers due for replacement

DLY894Y was the second XR2 I’d looked at. By now it was August 2010 and I’d been trawling eBay on a daily basis (or in fact, several times a day!) looking for one that suited me. I drove over to Cirencester and fell in love with it – so much so that I successfully managed to persuade the seller to end the auction there and then and take an offer of £1400, a bargain!

My XR2 has had eight previous owners and the previous one (along with several of his mates) had used it on a daily basis. That said, it wasn’t as rough and ready as you might imagine, but it was far from perfect. The previous owner had fitted a K&N filter and had lowered the springs but that was about it.

84bhp from the 1.6-litre engine with a twin venturi Weber carb

Since I’ve had it, I’ve spent in the region of £450 in total (although over half of that was on welding and other jobs to get it through its MOT). Work’s included a new radiator, having the bumpers powder coated, a deep and thorough valeting, upholstery repairs (which I did myself with a travel sewing kit after getting a quote of £60!), new tyres, bumper over-riders and end caps. I’ve also bought some normal height springs but can’t decide whether or not to fit them. As a result of the work so far, it’s now got an agreed insurance valuation of £2500 on a classic policy restricted to 7000 miles per year, for which I pay £280 for cover.

There’s still a lot I want and need to do, which will make it look great, if not mint. Jobs range from minor things like having the wiper arms painted to much more substantial work like fitting new front wings and front panel, half-body re-spray and a new set of vinyl stickers for the lower half of the bodywork. There’s also a squiggly dent in the nearside front door that needs sorting and painting too. 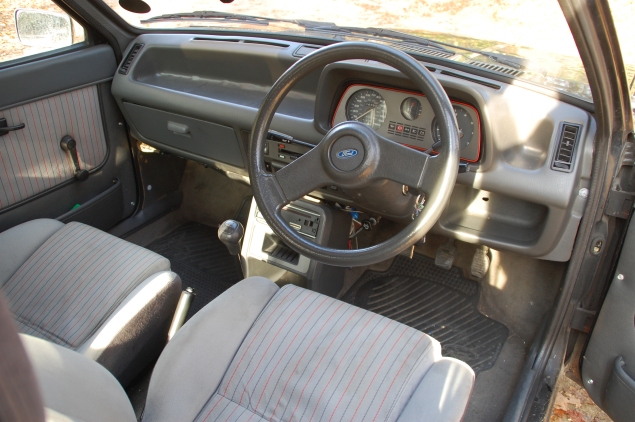 But despite all that still needs doing, I wouldn’t sell it in order to buy one that looks factory fresh. I’ve built up a relationship with my XR2 and want us both to have many happy thousands of miles together.

It’s great fun to drive too. You can really chuck it about, cornering fast and because it’s so relatively light, it has a great turn of speed for what looks like a relatively low power output. At the moment, the throaty burble from the engine sounds a little rough. I had to have the fuel mixture tweaked for it to pass the emissions part of the MOT and as a result it’s running rich. For a car I really enjoy driving because of the heads it turns and the attraction it gets, it’d be embarrassing for it to chug to a halt and cut out! 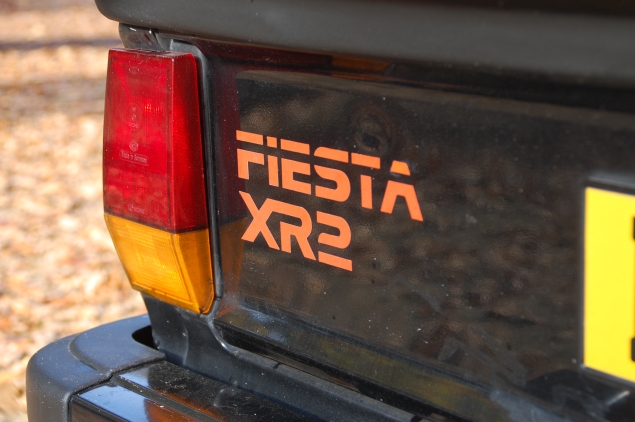 In the 11 years I’ve been driving I’ve owned a range of cars, although my love for Fiestas keeps shining through. It nearly started off very differently as my parents bought my first car for me. I’d insisted I didn’t want a Metro but apart from that anything was possible. Until my 1.1 L Fiesta arrived, the likely favourite was looking like a Škoda Rapid coupé.

When I bought the XR2 I also bought a little smart fortwo to run daily. Since then I’ve also bought (and still own!) another Fiesta Mk I (1.1 GL), a Mk III Fiesta 1.6 Si, the Mk VI Fiesta Black limited edition and a rough Mk II Astra Starlight. 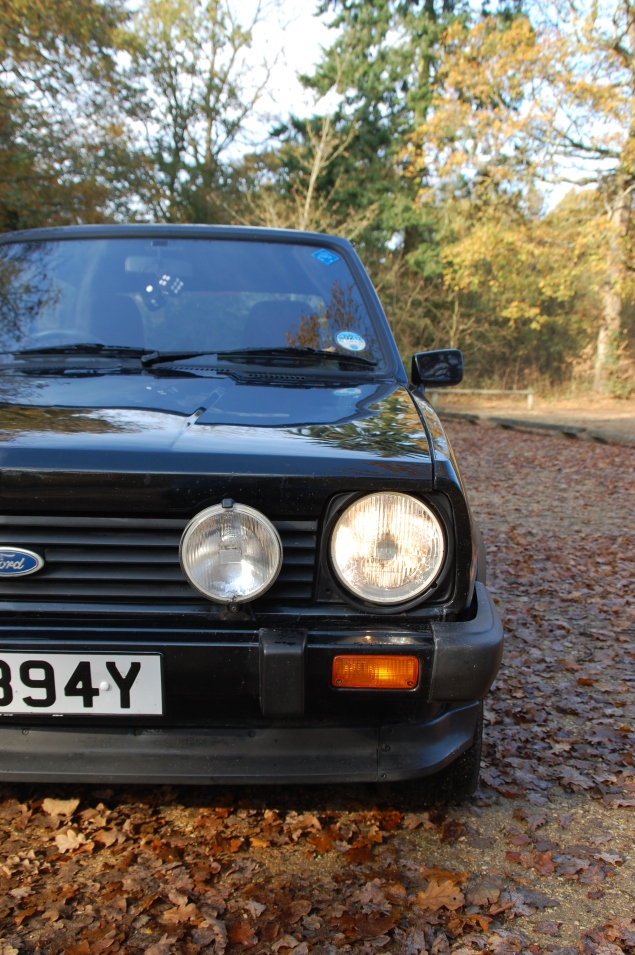 People ask me what’s the point of having so many cars. Well, first and foremost I love cars, driving them, being around them and simply looking at them. But I also think cars are like shoes – you always want more than what you’ve got. Before you know it you have a whole collection for different occasions.

I love showing my XR2 off at different shows, stretching from Beaulieu to Silverstone. Despite it not being in the best of conditions, it always gets a lot of admiring glances, even though most guys who come to look at it assume it belongs to a male friend rather than me.

Joining a good car club is essential too. I’m in the Fiesta owners club just now but intend to join a sporting Ford club in 2012 too. They’re great sources of information, advice and hard to find parts. 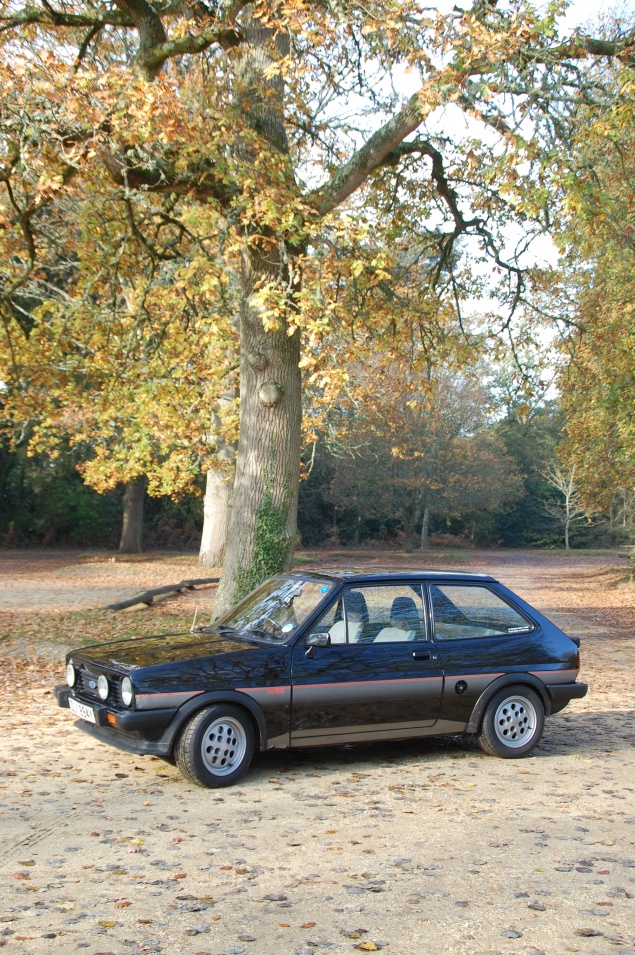 Could a Mk I Ford Fiesta XR2 tempt you into classic car ownership?

Can I recommend a Mk I Fiesta XR2 to anyone looking at buying a classic car of tomorrow? Definitely. It’s cheap, fun, easy to work on and it’s impossible for you to get from behind the wheel without a massive smile on your face. What more could you want?”