Choosing a car is akin to the quest of finding a partner to share your life with. In the sense that we all have different tastes and find different people attractive, there’s an enormous shoal of automotive fish in the sea to choose from. 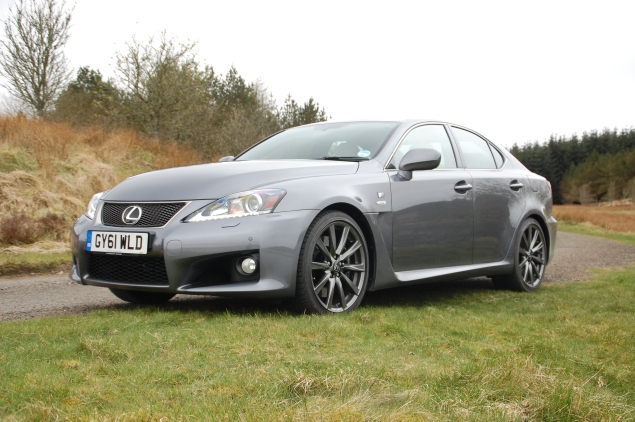 There are those that are looking for a quiet, easy life, with few dramas and lots of dependable reliability. Others go purely for looks and to hell with what it’s like to live with. Some even have something special for the weekend…

Then there are those who want it all: an addictive, intuitive, fast paced and exciting relationship with German heritage. These people will be fascinated with the powerful alphanumeric triumvirate of C63, M3 and S4. But in being so focused, are they missing out on alternatives that might light their fire? Could they be tempted by the Lexus IS F?

Aren’t Lexuses all about hybrids and being whisper quiet?

Whilst it’s true that Lexus is successfully carving a premium car niche out for itself with state of the art petrol-electric hybrid drivetrains, allowing cars to run in near silence in EV mode, it seems someone forgot to tell the engineers who worked on the IS F.

Power is sent to the IS F’s rear wheels purely from the output of a conventional internal combustion engine, with no electrical assistance. Not that it’s an ordinary engine, mind you, for this 5.0-litre V8 is shared with the flagship LS 600h. 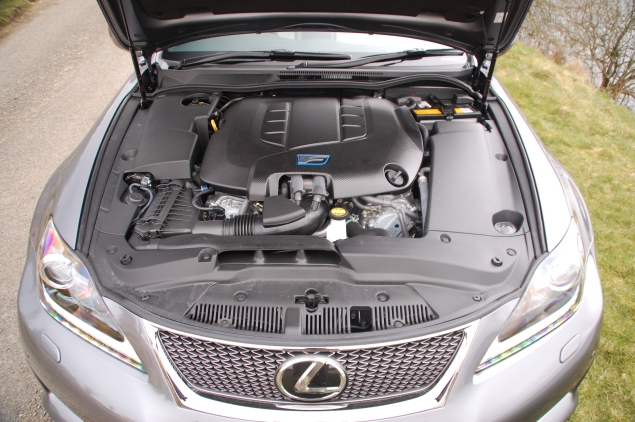 Shoehorning the Japanese firm’s largest motor into its second smallest model proved impossible and subsequently the F’s nose was modified and subtly lengthened to house the eight-cylinder unit. Not only is the F 75mm longer than the regular IS 200d and 250 models, the bonnet line itself is taller to give the dual bank of cylinder heads more clearance before plunging sharply down towards the grille.

Modifying the front end provided Lexus’ designers an opportunity to bless the IS F with a more purposeful and menacing appearance. Out go the vertical grille vanes, replaced by a gnashing set of zigzagged elements, replicated in the enlarged lower intakes too, with a hint of the family ‘spindle’ nose in the bumper moulding. Foglights at the extremities accentuate the width with LED and bi-xenon combination headlights above to complete the frontal aspect. 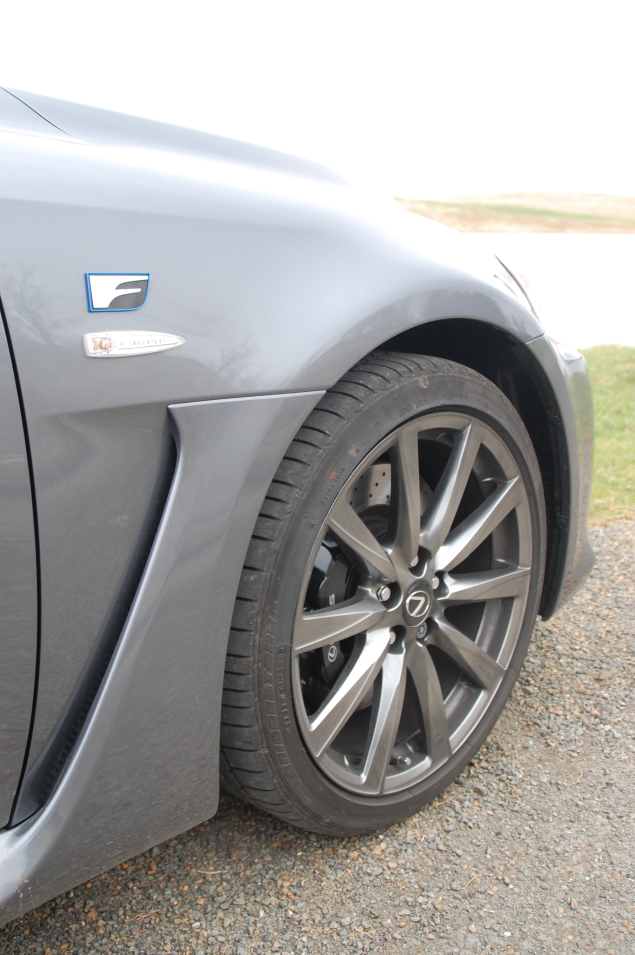 Aft of the front wheels, a new bodywork element creates a gill, the panel itself then runs backwards in the form of a pumped up sill cover. Ten-spoke 19” alloys have a gunmetal finish, riding on shallow 35-series Bridgestones, complete with a practical, hard protrusion around the sidewall to minimise kerbing. 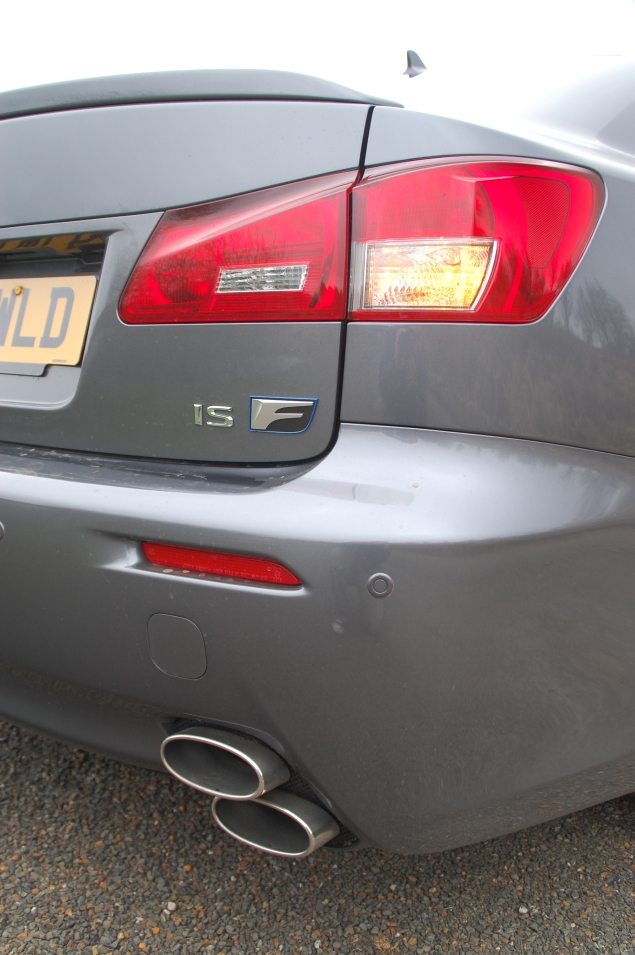 Arguably the IS F’s biggest talking point stylistically are those stacked rear exhaust pipes, a pair on either side of the swollen rear bumper. Except they’re not pipes, they’re trims that don’t physically connect to the exhausts behind them. Lexus certainly isn’t alone in adopting this policy but for some it smacks of spoiling the good ship IS F for a ha’pworth of tar; I can’t help but wonder if the majority of potential customers will either know or care.

With a V8 of that size, it’s got to make a great noise?

Without doubt, one of the IS F’s most alluring assets is the magnificence of its aural delight. Push the starter button and it barks into life in a manner one might be accustomed to in a pit lane. Tease the accelerator and that even, purposeful thrum gives way a deeper, primal growl, as though Godzilla has risen from his aquatic lair. Whether or not those tail pipe finishers are connected seems less relevant for it’s an addictive noise.

Point the IS F towards a long stretch of open tarmac, floor the throttle and it rifles through each of its eight ratios in quick succession; 60mph is reached and past in less than five seconds and the performance Lexus chatters on to a limited top speed of 168mph where permissions allow. 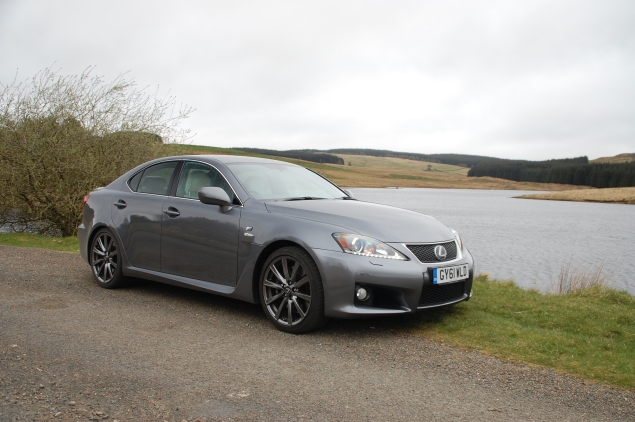 The intensity of the F’s performance is like an on-off switch with all the power seemingly champing at the bit instantly. Those wide tyres and electronics ensure the rear end remains planted and gripping the asphalt so hard you fear it might pull it free from the rubble below the surface. In fact, so adhesive is the Lexus’ back end it requires extreme provocation, or loose surfaces, to induce much in the way of tail wagging.

Although the gearbox is automatic, the cogs can be swapped manually via the gear lever itself and steering wheel mounted paddles. The sequential action works seamlessly and precisely, downchanges accompanied by revs screaming into the stratosphere as the V8 gnarls through super unleaded with a decadent ferocity. 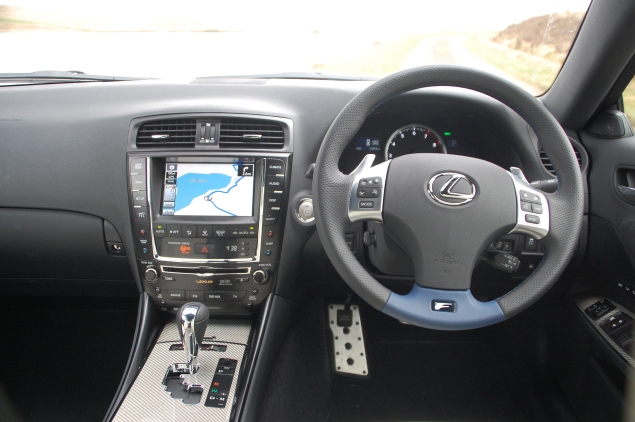 The view from the IS F's driver's seat

Needless to say, although the IS F is not a large car, the enormity of the engine and the 417bhp of power at its disposal means a combined claimed average of 24.4mpg is about as good as it gets, although I did achieve a surprising 28.0mpg on one motorway run. Similarly, CO2 emissions of 270g/km push the Lexus into the most expensive Band M for road tax. In isolation, the figures look expensive, but compared to BMW’s M3 (420bhp, 25.2mpg, 263g/km) and Mercedes-Benz’s C63 AMG (451bhp, 23.5mpg, 280g/km) the IS F looks fairly typical, although all three are significantly dirtier and thirstier than the admittedly cheaper and less quick Audi S4 (328bhp, 34.9mpg, 190g/km).

Frustratingly, the fuel tank is just 64 litres in capacity, which might work well for the IS 200d but it limits the range to around 300 miles under harder driving.

So, the IS F has the performance but has Lexus made it a driver’s car to match the best from Germany?

On relatively straight roads, interrupted only by bends that gently caress the landscape, topped by a billiard table smooth surface, the IS F is a devastatingly effective weapon. Indicate to overtake and immediately the cars you intended to pass appear as specks in your rear view mirrors as you guide your four-door saloon-shaped cruise missile towards its target destination. Let’s make no bones about it, that combination of speed and pinned-to-your-seat acceleration is an intoxicating one. 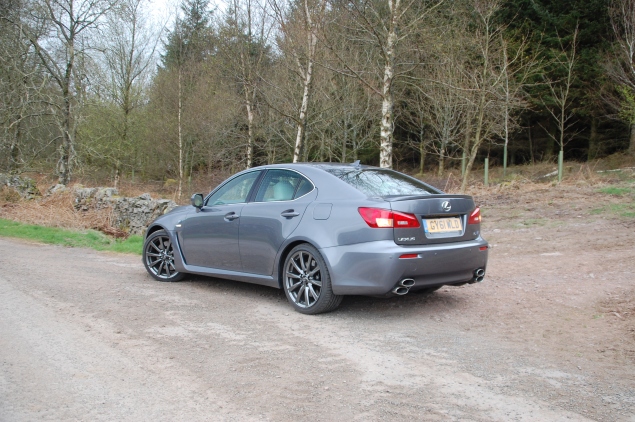 The IS F provides tremendous adhesion from its rear wheels

But take the IS F off the beaten track and onto less densely populated minor roads and the story is one of speed but lacking in satisfaction. The enormous performance and stopping qualities remain but at slower speeds and through tighter bends, the Lexus lacks the finite edge of engagement that many performance saloon customers crave.

It steers with great precision but the electrically-assisted power steering just feels a shade too desensitised for thrill-seekers to get their kicks. While the IS F’s impressive traction enables those smaller radius corners to be dispatched quickly, its distinct lack of playfulness leaves you wanting more. 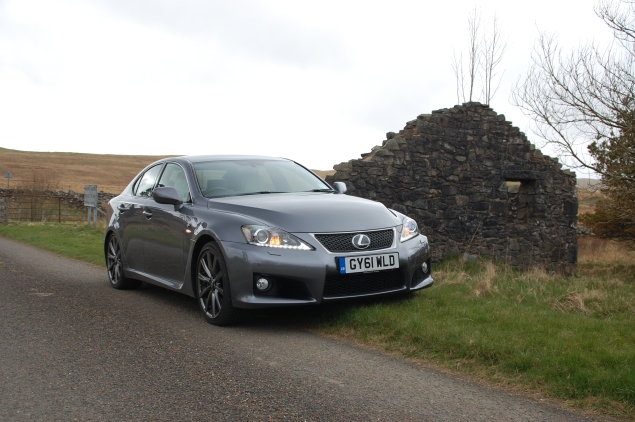 The biggest drawback on the handling front is the harshness of the ride itself. Lexus reworked the spring and shocker rates at the end of 2010 but it still feels on the harder side of stiff when the road surfaces and undulations are less than ideal. The better and flatter the road, the more the IS F excels. Lexus honed the F’s chassis on the Fuji Motor Speedway in Japan and it shows – around a track it’d prove to be devastatingly quick and efficient, but roads around Britain tend not to replicate racing circuits in the main.

Lexus has an enviable reputation for reliability, quality and even within the premium sector, impeccable build quality. The IS F continues this trait although the gap to its German rivals is cigarette paper slim.

These type of hyperformance saloons have a strike a balance of feeling more special than their lesser brethren but offering the speed to compensate for a lower grade of materials and equipment than slower cars that occupy the same price bracket. 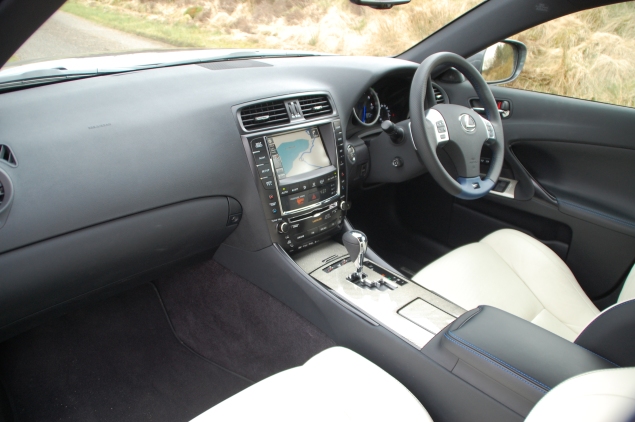 Dense, high quality plastics form the bulk of the interior panelwork, unsurprisingly solid and creak free in construction. The test car was fitted with ‘Fuji White’ perforated leather seat facings with black hide on other surfaces, which looks fantastic, although the faux silver-finish carbon fibre trim on the centre console is a little clichéd. Brushed aluminium, gloss black, or even real carbon fibre (the IS F is nearly £60,000 remember) would be more fitting. 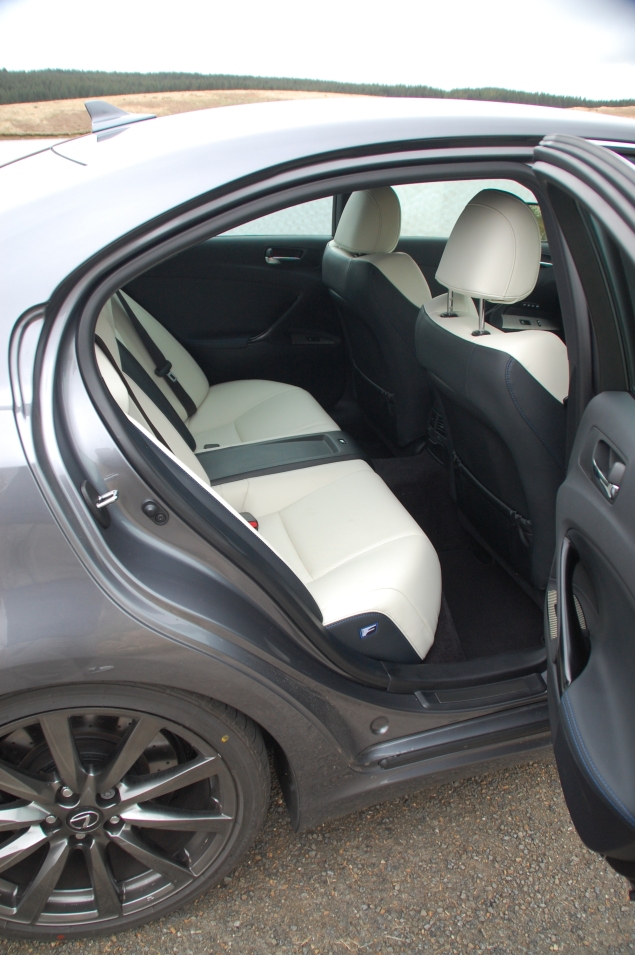 The IS F is a strict four-seater although the rear is tight on space; white leather lifts the ambience

The IS F is a strict four seater too, the rear bench split into two distinct buckets, separated by a black central panel, featuring the ‘F’ logo which is repeated around the cabin. Rear seat space, as with all IS series models is at a premium with my knees pressing into the back of the driver’s seat in the position I’d have it.

Up front it’s more spacious yet still cosy, the cosseting nature of the cabin amplified by the black suede-like headlining. The seats themselves are brilliantly comfortable and supportive, holding you in place without pummelling your kidneys through bends. Despite their six-way electrical adjustment the seat positioning was still too high – in a comfortable driving position my eyeline was in the top 20% of the windscreen, inducing the occasional lean forward to see traffic lights at junctions.

Lexus has been generous with the kit count on the IS F, further helping to lend justification to the price tag. In addition to expectations like electric windows and mirrors, your purchase also buys satnav, reversing camera, Bluetooth and DAB radio equipped audio, radar-guided active cruise control, heated seats and automatic lights and wipers. 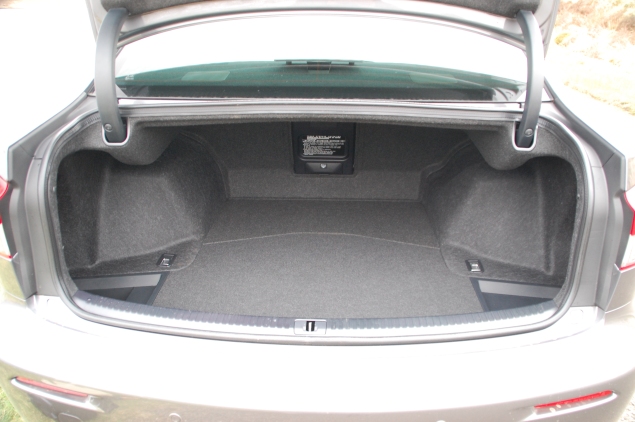 Despite near supercar performance, the IS F retains a practical edge

If the look of the IS F appeals more than the price or performance, F Sport versions of the IS 200d and 250 available with a similar level of visual purpose for £29,395 and £30,345 respectively.

Judging by the admiring glances the Lexus IS F gets wherever it’s parked, there’s an undeniable brawny appeal about its ripped bodywork, that is only heightened as each of the eight cylinders explodes into life with accompanying thunder.

It’s an entertaining package that offers a tremendous bang for your Buck, delivering instant thrust and a top speed 13mph higher than the Germans officially allow on their rivals; bragging rights to the Lexus there. 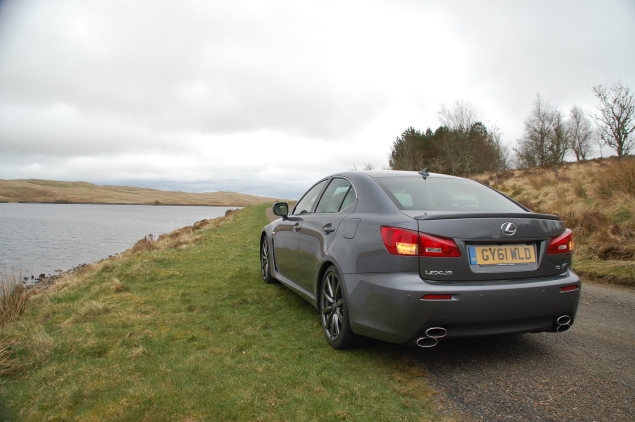 The Lexus IS F can show the Germans a clean pair of heels in a straight line, but is it enough?

But as hard and fast as the IS F likes to go, it’s small step away from ultimate ‘at oneness’ with its driver, focusing on what it does well rather than showing a desire to be a willing all-rounder.

I can understand the Lexus’ allure and would congratulate anyone who buys one to enjoy the performance but I’ll stick with my selection of German origin.