Chevrolet is synonymous with Americana. From the iconic and befinned ’57 Bel Air, through the unspecified Chevy Don McLean drove to the levee in American Pie, to NYPD liveried Caprices in gritty dramas with cops within consuming their own body weights in doughnuts and cwoffee, think of the United States and there’s a gold bowtie wearing model somewhere in your subconscious. 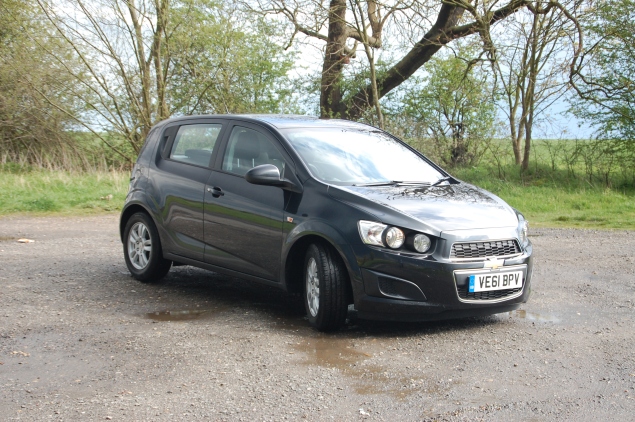 A leap ahead of the model it replaced but is the new Chevrolet Aveo good enough to challenge the class leaders?

Somewhat incongruous then that from the marque that gave us the Corvette, the Chevrolet supermini on test here hails from South Korea.

It begins to make sense when you remember that for much of the past decade Chevrolet no longer just represents American mainstream General Motors products, but is now a global brand name used to replace the car manufacturer formerly known as Daewoo.

Is the latest Aveo capable of taking on the might of the Fiesta and Polo or does it still bear the hallmarks of Daewoos of old, being cheap and not very cheerful?

That it does. Size-wise the Aveo is typical of others in this segment at a shade over the 4m boundary, with a robust looking taller body to maximise interior space and house the plethora of safety equipment needed for a good ranking in today’s Euro NCAP-savvy world. With an overall 5-star rating, the Chevrolet is one of the safest superminis available.

Hooded headlamps give the Aveo a distinctive, sporty appearance

Unlike Daewoos of yesteryear, this latest Chevrolet is styled to look distinctive and appealing rather than bland or weird. The detailing and stance suggest aggression and a sporty potential, with exposed and slightly recessed quad headlamps, gaping and bisected front grille and bodyside creasings that are angled towards the nose, suggesting a forward motion.

Tipping a wink to certain Alfas and SEATs, the Aveo appears at first glance to be a 3-door hatch but nestling in the C-pillar finishing trim is a sneaky rear door handle on either side. At the back, the near vertical tail features a hooded spoiler above the rear screen and circular light lenses that are set in matt black plastic to mimic the stylistic feature of the headlamps.

There’s a satisfying chunkiness about the Aveo’s styling that suggests it’ll nerf its way around urban rat runs and tough it out in bumper to bumper face offs. Not only do those cowled headlamps look good but the individual lenses are cheaper to replace than the complex lights fitted to the majority of rivals.

The little Chevy also looks bold around its rear quarters too

Overall the result is a small car that looks distinctive enough to set it apart from car park blandness yet isn’t overly styled to the point of it screaming fashion victim a couple of years down the line.

So it looks sporty, does the Aveo have some ‘Vette DNA coursing through its veins?

Get behind the wheel of the Aveo and you feel the Chevrolet’s styling is something of a misnomer. Okay, it doesn’t shout ‘pocket rocket’ but those aggressive details hint at a latent prowess within the chassis. Pootle around for a few minutes and you inevitably feel a bit short-changed in that department.

At best, the Aveo’s dynamic arrangement can be described as competent, performing with neither surprise nor delight. Sensibly the engineers have focused on making sure the Chevy performs at its best at the sub-30mph speeds in which it’ll typically spend most of its time. Supple spring and damper ratings allow the Aveo to ride over the arduous terrain of the High Street, transferring little of the discomfort potential to the posteriors of its occupants.

Out of town and cruising the highways and byways, the Chevrolet remains well composed, perhaps surprisingly so. The straighter the road, the Aveo feels planted and mature, mimicking a larger car with its poise.

The suspension set-up is aided and abetted by the fitment of 15” alloy wheels with chunky, high profile rubber. Those tall sidewalls pay healthy dividends in terms of bump absorption but don’t lend a particularly helping hand when you point the Aveo at twisty ribbons of road. And although there’s a definitive comfort bias to the ride quality, when you do press on and demand more from the Chevy, it tries to be a willing partner for a bit of back road fun but can’t quite deliver. Whilst grip is strong, there’s too much roll as you plough into faster bends with enthusiasm – where you want to have confidence to feel what the Aveo’s going to do next, it’s simply not forthcoming.

A lack of steering feel is the primary culprit at play here, being overly assisted and seemingly connected to the steering rack with telepathy such is the level of sensation through the palms of your hands. Disappointingly, the wheel itself is not especially pleasant to the touch either. Initial impressions are that it’s leather encased but it’s merely a moulding in the rim plastic, a material that felt slippery through the fingers, not giving sufficient purchase.

No ‘Vette pace then either in the Chevy Aveo?

Three engines are available in the Aveo line-up: two petrols of 1.2- and 1.4-litre capacity and a 1.3-litre Fiat-sourced diesel as tested here. Actually at 1248cc it’s a 1.2, not a 1.3, but what’s 2cc between friends? Although badged VCDi  on the Chevrolet’s tailgate, this is the much vaunted Fiat MultiJet unit, as used in the 500, Panda and Punto, as well as the Ford Ka and some smaller Vauxhalls.

With 94bhp in this application, you’d be forgiven for thinking that in spite of its frugal intentions, it wouldn’t be uneconomical in delivering sprightly performance, yet somehow the combination of a reasonable dose of power and relatively light weight hasn’t bestowed the Aveo with much more than moderate pace.

Even with peak torque of 140lb/ft being delivered in the lower echelons of the rev range the gears have to be flicked between regularly to make anything resembling brisk progress. Whether there’s been some cost saving measures at play or not isn’t clear but it sounds somewhat vocal under the Aveo’s bonnet too. Unless you cover the mileage to warrant a diesel, it’s probably best sticking with the larger of the petrols for greater refinement.

That 78.4mpg is quite a boast in the official figures and one which seemed to be within the realms of fantasy compared to the 55mpg I averaged over the week, although that return in isolation isn’t bad for real world driving on a mixture of road types. On the plus side, the stop-start system worked well and cranked back into life immediately as the clutch was dipped and the gear lever snicked into first – just remember that the getaway is pedestrian.

Does the Aveo perform in its role as a capable supermini?

B-segment hatchbacks tend to fulfil a multitude of roles regardless of the types of owners who drive them and as a contender, the Aveo does most things you could ask of it. Four adults can be transported about in reasonable comfort (five are doable at a squeeze), useful oddments space for cabin detritus and there’s a usefully sized and shaped boot to carry a week’s worth of shopping with ease. 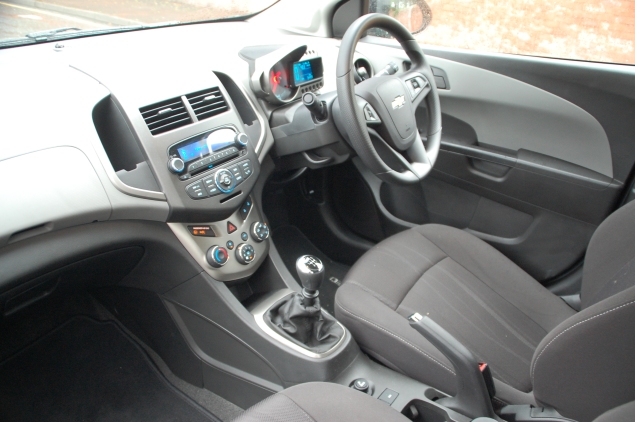 That alone isn’t enough and car buyers in 2012 aren’t satisfied with a car simply as ‘transport’, a car has to be (quite rightly) something that is an extension of the owner’s identity and makes them feel good about what they’ve bought. And here, the Chevrolet tries to be different but somehow doesn’t pull all the elements together successfully.

The dashboard is conventional in the main with the major controls where you’d expect to find them, apart from right in front of you where a conventional binnacle would live you’re faced with a digital and analogue pod of information. A large (and disappointingly inexpensive looking) rev counter sits to the left of a pale blue LCD rectangle with digital readouts for the speed, fuel level and other important data. This is sandwiched by a silver frame punctured by circular slots for the required warning lights. The overall effect should be something that’s bordering on cool in these touchscreeny smartphoney times but in execution looks more Tomy than Apple. 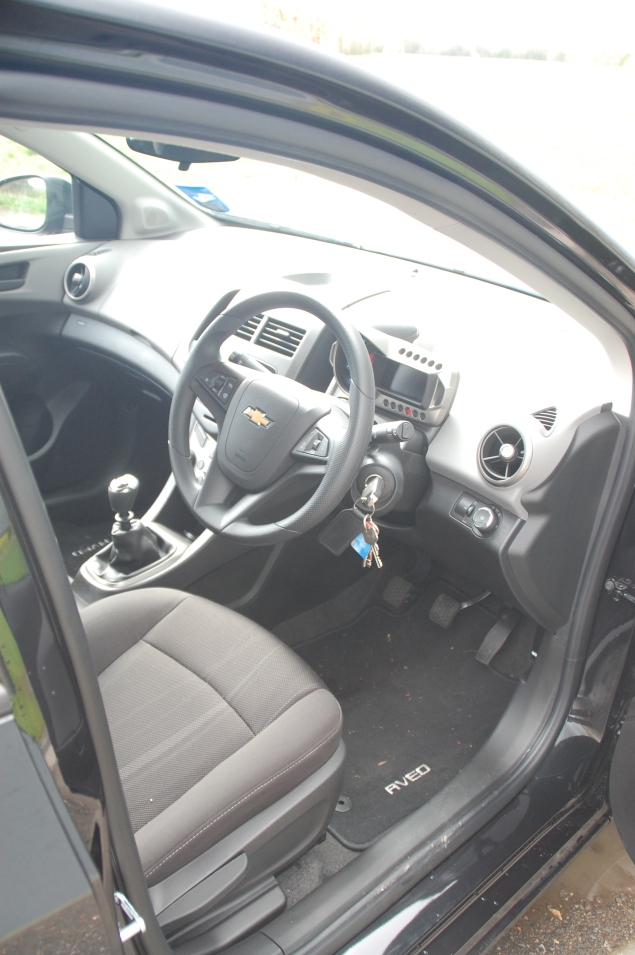 Inevitably your hands will caress and explore the surfaces around you and in the Aveo the feedback from your fingertips is not to do that again unless necessary. Although visually the plastics look interesting in their forms and finishes, they’re almost all hard and unyieldingly resilient. They’re undoubtedly hard wearing, just unappealing to touch in the main. The only regular piece of tactility that feels good is the gear lever with a rubbery finish where your fingers wrap around.

Unfortunately this also transfers to the major switchgear too, with the buttons, dials and wands actuating with an undamped, clicky action. It gives the impression that the Aveo is built down to a bargain basement price yet the sub-£13,000 price tag puts in firmly into Fiesta and Polo territory where eyes and hands are treated like comparative royalty in traffic light games of poke and prod.

Plastics aside, the Aveo feels spacious, helped considerably by the current fashion for taller cabins and more upright seating positions. The front chairs are supportive and genuinely comfortable on longer journeys, although the lack of a centre armrest in the front is an oversight. The rear bench is flatter and unsurprisingly a little less comfortable but it nevertheless feels light and not claustrophobic. 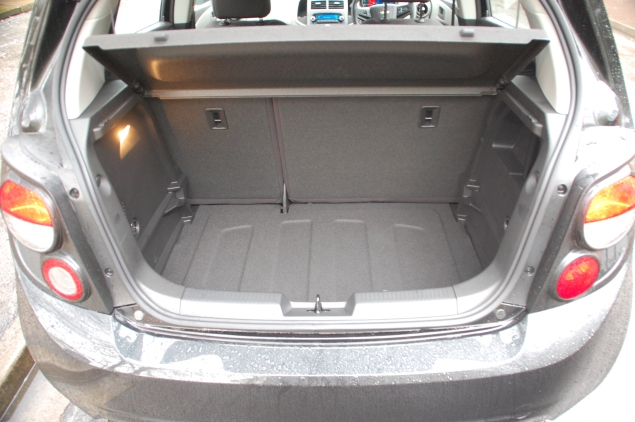 A 60:40 split folding rear seat gives the Aveo on par practicality in this sector

Approach the Chevrolet Aveo and even from a short distance it looks like a contender. Distinctive, attractive and a world away from the Kalos-based model it replaces both stylistically and dynamically. For the Daewoo/Chevrolet faithful trading in and up this is great news.

But the more you explore the Aveo, the more apparent the bold styling is a veneer covering a relatively ordinary and inexpensive feeling small hatchback. 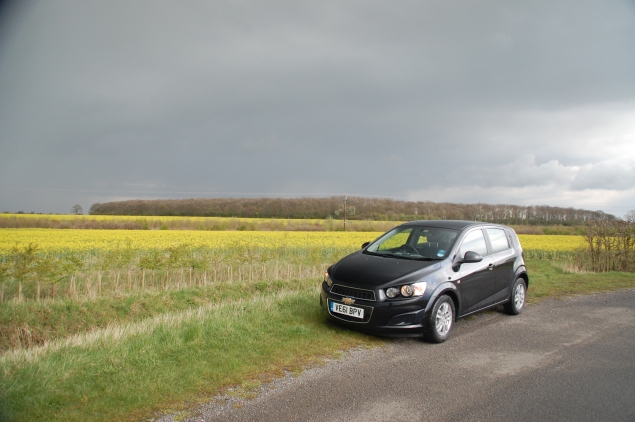 Yes, it rides in a manner that’s quite accomplished for a small car and yes the build quality is fine but the materials used and the overall chassis setup lacks the finesse and passion that mark out the class leaders in the B-segment and explain a lot about the Fiesta and Polo’s sales success.

The latest Aveo is a definite advance for Chevrolet in this crucial market sector, but it’s not going to worry the mainstream too much.