Hyundai isn’t going to be the first name that springs to mind when your mind’s conjuring up brands with a sporty heritage, which is perhaps why its newest coupé, the Veloster, treads an unfamiliar path in the styling department.

An aggressive version of the Hyundai face graces the Veloster

The Korean brand has forayed into coupédom before of course, with the snoringly dull Scoupe of the early 1990s, followed by two generations of the much more fancied but unimaginatively titled Coupé, the later model having more than a passing resemblance to Ferrari’s 456. If you half-closed your eyes.

Hyundai’s problem is still its image. Or rather lack of a clearly defined one. It’s successfully shaken off its reputation for offering bargain transportation typified by the Pony and Stellar (oh, the irony) years but in its journey towards respectability and acceptance, Hyundai finds itself with a non-personality. An image vacuum if you will.

The past couple of years have witnessed a hint of change with the swoopy and slashy bodywork pressings adorning the ix35 and i40 ranges but Hyundai’s biggest problem is the praise and interest focused on its junior partner, Kia.

So rather than go glamorous with the latest coupé range, Hyundai’s gone for bold. The result is the Veloster.

The front doesn’t look especially radical, sharing themes from its conservative i30 relation, albeit remoulded into a more rakish form but from the A-pillars rearwards it gets interesting. The rear screen looks like it’s been peeled upwards into the roof, limiting visibility out back but making the tail distinctive. Hollowed out recesses which the rear lights only partially fill add a further flair of unusualness to the overall effect.

Veloster’s joker are its asymmetrical sides – the offside has a single side door for the driver, the nearside a pair, with one to get into the rear. The point? Well, there isn’t one specifically other than an attempt to create a talking point where there might not otherwise be one.

“Harsh” you say, pointing at the MINI Clubman. Well , the Clubman only has one door primarily because of the fuel filler’s position on the opposite side, so whether right or left hand drive, the door remains resolutely on the right hand side of the car.

The Veloster has its rear door swapped depending on market demands, meaning Hyundai’s engineered (at what cost?) two different sides for the car. Ladies and gentleman, I point you in the direction of Mazda RX-8 – a coupé with a distinct set of doors on both sides…

If you set aside the styling and door arrangement, you’re left with something disappointingly lukewarm. The name doesn’t help, firing the imagination with inferences of this being quite a potent tool. With 138bhp on tap from its 1.6-litre engine, Briskster would have been a more appropriate title.

But it’s certainly not all a tale of disappointment: despite being down on power, the Veloster nevertheless feels smooth and refined, the six-speeds of its manual gearbox snicking between ratios sweetly, the steering feeling reasonably well-weighted and offering more feel than one might be expecting.

The chassis itself is clearly capable of handling more power, which the forthcoming Veloster Turbo should hopefully be able to make more of. The ride quality has an enjoyable balance between comfort and agility, that won’t trouble more hardcore offerings in this segment but neither will it be disgraced. 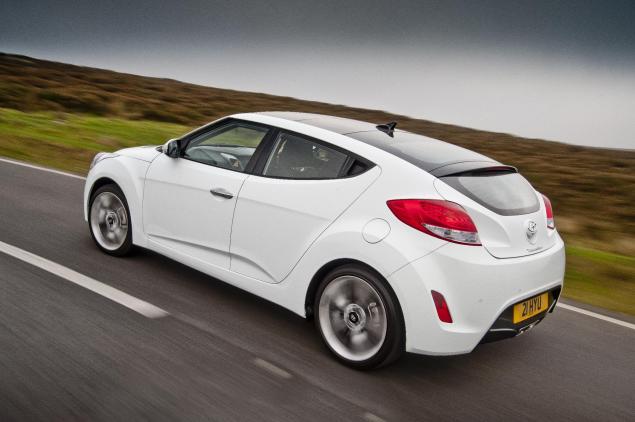 Hyundai Veloster’s most distinctive angle. And there’s the single rear side door.

Let your hands explore the interior and again you’ll be pleasantly surprised, for the soft-touch fairies have been waving the wands frantically. The build quality and switch gear operation has an air of, dare I say, premium about it. And it’s spacious too. Just a shame you can only get into the back from one side.

Some will applaud Hyundai for being different with the Veloster surely different is only worth celebrating if it makes a positive change to what might otherwise be?

Today’s product savvy customers understand cars cross boundaries these days, so install a pair of doors on both sides of the rear quarters and give the chassis the increase in power it deserves. Such a move will increase product desire and give Hyundai something it can latch onto image-wise.