What’s Honda mean to you? Depending on your age it’ll vary. For someone like me in their mid-30s (I know, I’ve bathed regularly at the Font of Youth) that stylised ‘H’ emblem is synonymous with Senna’s three Formula 1 titles and a massive range of worthy family flora and interesting coupe fauna. 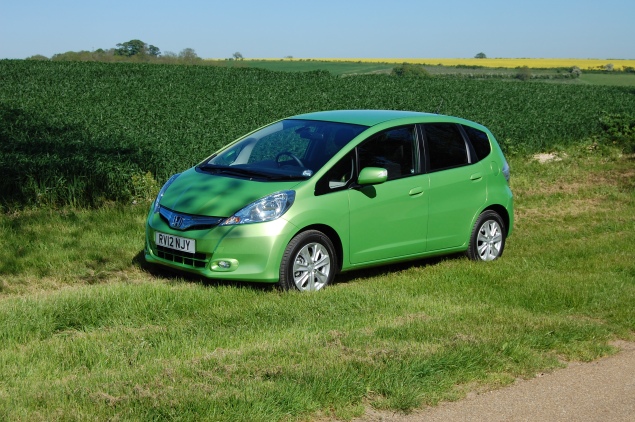 But for a younger generation, digesting the Honda line-up leaves little to get excited about. Yes, there’s the cutesy coupe CR-Z but this is a range not only bereft of S2000s and NSXs but also that iconic Type R badgework. Even the Civic’s domination of the British Touring Car Championship in 2012 hasn’t resulted in much showroom coolness.

The Jazz is already known as a pensioner’s favourite, the driver’s seat regularly occupied by a pilot with silvered locks. But does that change with the Integrated Motor Assist hybrid powertrain and in-yer-face Fresh Lime paintwork?

As with the first generation Jazz, the latest shape is tall and monobox in profile. Whilst this liberates masses of interior space, it’s hardly the milkshake that brings all the boys to the yard. Indeed, those high rise doors make entry all the easier for shovelling kids into their booster seats and, dare I suggest, simpler ingress for those of more mature years too.

But look closer and you’ll soon tell the Jazz isn’t as boxy or clunky as some others in this segment, with intersecting lines and body creases wrapping around to produce interesting shapes and slick details to prevent the onset of blandness.

Despite the efforts to make it interesting and cute, it doesn’t look like it’s going to deliver excitement so when you get behind the wheel it tempers the disappointment.

Is the Jazz Hybrid a bit dull behind the wheel then?

Fire up the Jazz’s engine and you’re initially greeted with relative silence, the engine only cutting in once you’re on the move. When the 1.3-litre i-VTEC engine is running, Honda’s hallowed engineering heritage is evident, with a sewing machine smooth resonance just about audible.

Slip the floor-mounted automatic lever into Drive and progress is immediate and unruffled, the Jazz zipping off with an impressively zesty initial take-off. The whole experience is relaxed and simple, designed to offer a calm driving sensation to encourage frugal motoring – a feat achieved with the Jazz rarely dipping below 50mpg during the week of the test. 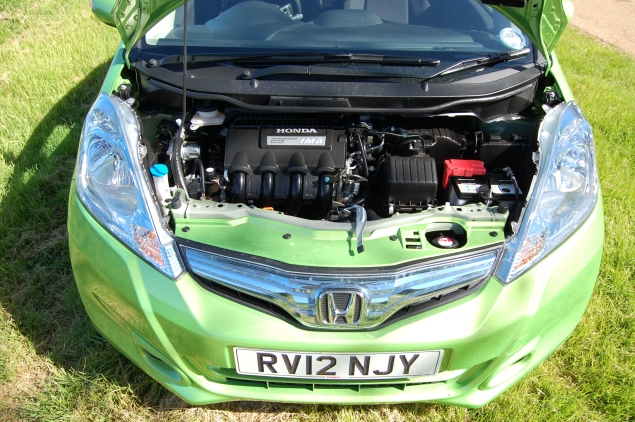 Around town the Jazz’s lightness and ease of use is a boon, making it a doddle to manoeuvre in urban environments with its steering needing next to no effort to move this way or that even at very low speeds. The CVT box continues the effortless approach, with revs remaining low and lazy.

Stop at the lights and your eco-warrior credentials get a morale boost: the instruments’ glow switches from a you’ve-been-a-little-naughty turquoise to a head patting bright blue, while the engine cuts out, saving further consumption of petrol. As soon as you’re ready to roll again, removing your foot from the brake pedal brings the engine back in gently yet immediately.

It all works well save for two gripes. Firstly the engine cuts out just before a standstill is reached. While this undoubtedly saves a microscopic percentage of fuel, dipping the throttle again induces noticeable shunt in the transmission and the little Honda lurches a little. Even with practice, this proves difficult to drive around.

Secondly, while the engine’s cut out, you might wish to snick the gear lever into Park, yet doing so fires up the engine again. Why so? Well, as you pass through the reverse gate, the ECU thinks you’re ready to go backwards so the four pistons crank over. You can’t help but wonder if this could be cured with even just a half second delay as the lever pushes forward, past the R position. 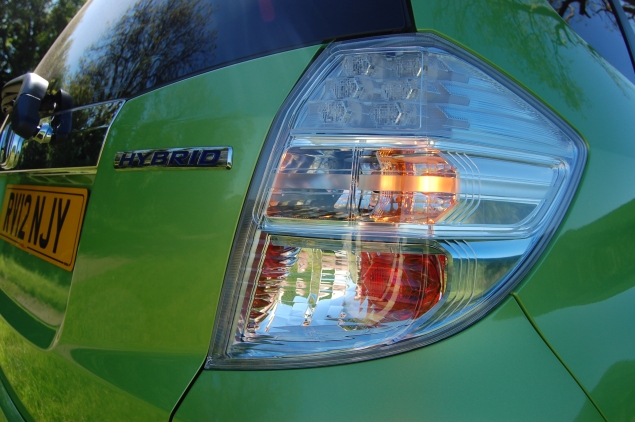 Honda used to enjoy a fine reputation for cars that not only handled well but rode beautifully too. Fully independent double wishbone suspension was the order of the day back in the 1980s but cost savings have dented this aspect of the corporate armoury.

In spite of its simpler, cheaper suspension arrangement, the Jazz manages to absorb all but the harshest of ruts without sending shockwaves through the cabin and secondary comfort is handled well too, with smaller ripples and undulations troubling the Honda infrequently too. So isolated is the steering feel, there’s no noticeable kickback through the wheel either.

Okay, so the Jazz Hybrid sounds fine in the city, what about further afield?

There are few small capacity engined cars that perform well in the city that also excel on the open roads at higher speeds and the Jazz is no exception.

Once you’re up to motorway cruising speeds, the Jazz holds its own, settled at around 3000rpm and feeling planted, not being buffeted around by side winds, despite its obvious height. But getting to those speeds is less enjoyable.

Accelerate from a lower speed and the gearbox and engine seem to be uncommunicative about each other’s intentions. Press harder on the throttle and the downside of CVT boxes becomes apparent as the revs rise in pitch to a whining 6000rpm while the gearbox itself does little to translate this as extra speed at the front wheels. Slowly but surely the relaxed equilibrium is restored and suddenly you’re at 70mph. 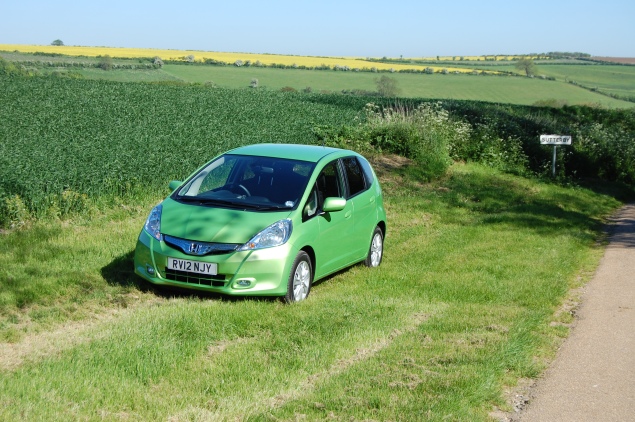 The countryside doesn’t bring out the best in the Honda Jazz Hybrid, even when it’s kept on the tarmac…

Peel off the slip road and take the scenic route and the Jazz’s talents are even less apparent. There’s little going on that’ll excite although the general lack of body roll as you’re pressing on into corners is a pleasant surprise.

It’s just too light and unengaging to induce much sense of fun, the steering wheel seems to be talking to the front wheels by two cups connected by a length of twine. At least the ride remains composed. Little consolation for the wooden handling that really doesn’t enjoy changing direction quickly before the front wheels chirp in protest and you gladly slow the pace.

The Honda Jazz must have some virtues though – a spacious interior was mentioned earlier.

Inside the Jazz’s cabin, occupants are treated to a veritable feast of spaciousness. Front seat passengers enjoy roominess in all directions, with excellent visibility all round. See, that MPV body with a higher seating position and additional front quarter lights does have its benefits. 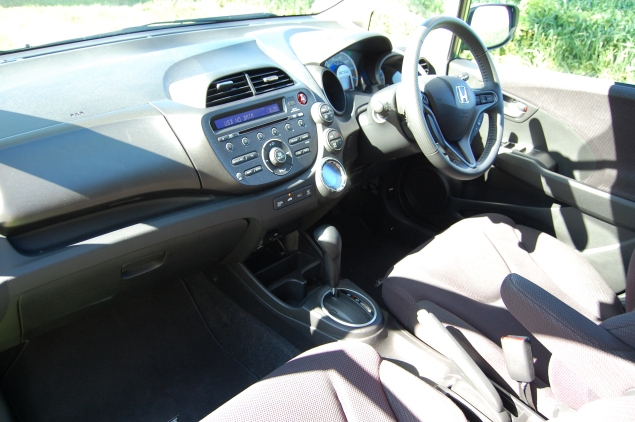 In the back the space is also generous and flexible too, with trick rear seats that recline but also fold with ingenuity as the seat squabs fold upwards effectively creating a larger boot with a central partition.

Getting comfortable in the Jazz is effortless, with a multi adjustable seat and wheel, together with an integral arm rest on the driver’s chair and a sensibly located foot rest for the redundant clutch foot.

Ahead of the driver is another curiously laid out dashboard which initially looks like it was designed in the School of Haphazardness yet surprisingly falls quickly and easily to hand. There’s an obtuse appeal to the blue-backlit randomness of the switchgear and dials but your desire to touch things is stifled by a copious amount of hard and unappealing choice of plastics.

Nevertheless, the Jazz is well-built and in mid-spec HS guise reasonably well equipped too with climate control, automatic lights and wipers, electric windows and power folding mirrors and iPod connectivity.

So, there you have it. The Jazz is a spacious, easy to drive, well built, reasonably equipped small car that’s at its best in town, where its ease of use and undemanding nature will appeal to commuters who spend a lot of time in a rush hour crawl. Hybrid drive allows for fine fuel economy and quiet progress at low speeds.

Although the Honda Jazz is not a bad car by any stretch of the imagination, neither is it one that’s going to ignite the imaginations or aspirations of a young generation of car buyers. It’s this core demographic the company really needs to re-engage.

Honda, look in your back catalogue for inspiration – there’s plenty there to get excited about.

Thumbs Down: Noisy when performance is demanded, low rent feel to plastics, unengaging.