“In my stars I am above thee; but be not afraid of greatness: some are born great, some achieve greatness and others have greatness thrust upon ’em.”

Shakespeare’s eloquence still resonates 410 years after the publication of Twelfth Night, its nuances still the centre of debate for school students and academics alike, within the context of the Bard’s works.

Greatness is something car manufacturers frequently claim they’ve embodied within their latest creations. Understandably so, after all striving to be the best, convincing swathes of potential customers they have beaten the competition with their newest model is a positively marketable commodity.

However great cars are claimed to be, one will rise to the summit of automotive hierarchy. Precisely which one is the subject of perpetual conjecture for hardened enthusiasts and armchair critics alike. But since the dawn of the motor car one name has become synonymous with reigning over all others: Rolls-Royce.

From the outside, the Series II Phantom is a subtle evolution – nearing greatness?

Such is the intimate relationship Rolls-Royce forges with its customers, it can rely on the immediacy and clarity of their dialogue to inform product planning. This is not a company that pores over Excel spreadsheets populated with data sets from a series of customer clinics. Where others might rely on questionnaires being completed, the Goodwood-based manufacturer believes in enlightening conversation.

Brand image is never in doubt with a Rolls-Royce

The result of that dialogue are a host of improvements that ensure there’s enough visual freshness to confirm the Series II’s arrival on the gravel driveways of their owners yet enough continuity of the familiar Phantom form to reassure existing owners that their loyalty is important.

Slender LED day running lights bisect the initially familiar oblong headlight units, illuminating a beautifully contemporary touch on that imposing visage; it pays homage to various models in Rolls-Royce’s history, with twin lamps set in a polished housing. Below, the circular spot lamps have been replaced by a Ghost style strip of amber LEDs.

With the Greek temple grille remaining vertically proud as the nose’s trademark centrepiece, the perpendicular lines now suit the Phantom’s bold, upright stance even better than before.

Elsewhere alterations are subtle. A reprofiling of the brightwork surrounding the glasshouse adds an elegant taper linking the angle of the third side window and the rear screen’s rake, ever so slightly softening that immense rear pillar, whilst maintaining a place of retreat and solace for chauffeured passengers.

Right at the back the bootlid’s trailing edge features a slender chrome strip and a reshaped bumper, all creating a visual lift to the tail, stylistically making it lighter and heightening the sense of waftiness, even when the Phantom’s at rest.

Initially looking somewhat out of place on this most prestigious of luxury saloons are a pair of exposed exhaust pipes nestling in the lower edge of the bumper. They’re complemented by the optional 21” seven spoke, polished alloys. Despite being wrapped in thick, cushiony Goodyears, the wheels look decidedly sporty and form part of a Dynamic Package designed to make the Series II more wieldy through twistier routes.

Imposing and luxurious: Rolls-Royce Phantom Series II on the lawns of Doddington Hall

Styling’s terribly subjective; a matter of personal taste that ensures there’s never a perfect design. To these eyes, the latest Phantom Series II embodies the stature and elegance of Rolls-Royce’s most revered back catalogue of models, wrapped in a contemporary shell.

The height of luxury inside, another mark of the Phantom Series II’s greatness?

That illuminating insight into the tastes and requirements of Phantom owners has resulted in a host of interior enhancements for the Series II, but certain high-tech features available on the smaller, more driver-focused Ghost do not make it into the palatial cabin. 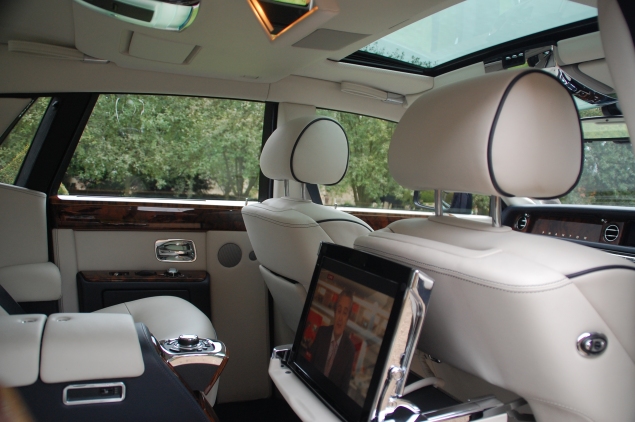 Make no mistake though, for the simple, relatively button free dashboard is not indicative of a paucity of equipment, it’s merely a matter of good taste that such technological advances can be hidden away should the owner desire it. So whilst the infotainment screen has been widened and now features beautiful and updated graphics, it can still be revolved out of view to be replaced by an analogue clock.

The linked rotary controlling pod can also disappear behind a veneered panel, making the most satisfying ‘whirr’ as it glides into its standby position. A matching one in the rear of this four-seater cabin, performs the same trick, allowing back seat passengers control over the multimedia functions as well as reclining in majestic comfort.

Nine of the finest hides available swathe seemingly every surface inside the Phantom, varying in texture depending upon its application. The quality of the materials and finish was simply perfect. Filling the gaps between them, this model featured cross-banded burr walnut veneers in a traditional style.

Sit in any car’s interior and your fingers wander exploring the switchgear on hand. In the majority of those cars it simply becomes a functional operation but in the Rolls-Royce, you find your hands engaging with the controls as eagerly as they would with an exciting new partner. Plastic is kept to a minimum in the Phantom, with delightful chrome toggles and organ stops being used wherever possible. The experience is exquisite.

For Phantom owners who prefer to drive from the back seat the sensation is imperious. Raised theatre seating provides a commanding view forwards without compromising headroom; even in standard wheelbase form the rear cabin of the Series II is palatial.

As a way of covering huge distances in opulence, few modes of transport can rival the Rolls-Royce. Relax your seating position, select your favourite television channel, pour yourself a drink from the onboard cabinet and bury your toes in that soft and sumptuous sheepskin over rug.

Is the Rolls-Royce Phantom Series II able to convey its greatness on the road?

Phantom is the ultimate expression of luxury motoring, the aim being to isolate the occupants from the outside world and maintain the serenity within that beautiful interior. Double glazed windows, inches of sound deadening and thick carpets ensure ambient noise is significantly reduced.

Where the Phantom is remarkable is in its ride quality. Air springs on all four corners help produce the most sublime experience on the road, almost hovercraft like in the way it negates any sort of imperfection in the asphalt’s surface. 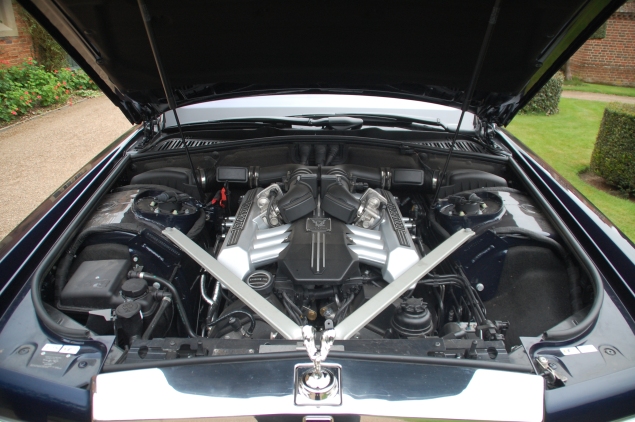 Behold the engine room. And within lies 6.75-litres of silken V12iness

You’d be forgiven for wondering if that surreal ability to iron out road undulations might make the handling so wallowy those enormous chrome door handles might be prone scraping on the ground through sharper bends. Not a bit of it.

The Dynamic Package doesn’t turn the Phantom Series II into an unlikely sports saloon but instead provides reassurance that the 5.84m long hull will go around corners without drama. Despite the enormous wheelbase, the rear wheels loyally follow the path of the fronts under normal conditions but get excitable with the accelerator pedal on corner entry and the rear end slides progressively wider before the on-board electronics step in and bring it back into line.

Body roll is kept to a minimum even with rapid changes of direction but the steering itself transmits very little feel. This is a deliberate ploy to preserve the sedate nature of gentle travel the Phantom has been conceived to deliver and discourages you from trying to hustle the Rolls-Royce too much around those oh-so-tempting B-roads. But when you do, the Phantom responds surprisingly ably, just in a way that feels isolated.

Performance is significantly more than adequate from the 6.75-litre V12 heart of the Phantom, with a limited top speed of 149mph. Even approaching three figure speeds, the experience is one devoid of stress or raucous engine note; depending on the speed, the volume from under the bonnet ranges from ‘is it on?’ to ‘barely audible’.

Overtaking is effortless at any speed, the newly install 8-speed automatic gearbox with column change (naturally) maximising the performance potential at all times. Kickdown is only marked by an increased surge, rather than anything you can hear, so seamless are the shifts.

The perfect way to travel, in indulgent isolation from the outside world

That enormous engine reveals the most significant weakness in the Phantom’s armoury: its prodigious thirst. The 19.1mpg combined average of the official figure seemed a world away from the 11.5mpg achieved on test, although that did include several runs along a busy Saturday afternoon High Street where pace and fuel consumption struggled to achieve double figures. But let’s have a moment of candour here: it may be clichéd but if you’re in a position where purchasing a Rolls-Royce is a realistic possibility, gas mileage isn’t going to be high up on your priority list. Chances are it won’t be on the list at all.

When experiencing something as magnificent as the Rolls-Royce Phantom Series II a thesaurus is simply incapable of suggesting the required smorgasbord of superlatives necessary to do such a fine creation justice.

It’s a car from a company passing through the gateway of a golden age in its history with a line-up of six models that’s soon expected to expand further still.

The magnificence of the exterior is matched only by the splendour of the interior that lies within. Beneath hides a mechanical package so refined that on occasion there’s more sound produced by the air conditioned breeze whooshing through the leather-lined cabin.

Naturally, greatness comes at a significant cost – the Phantom as tested featured many options that carried an additional tariff pushing the purchase price to an attention grabbing £388,150. 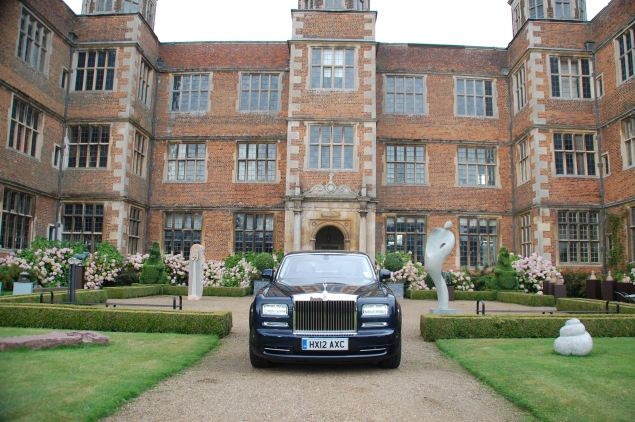 Rolls-Royce – still building the best car in the world?

People repeatedly asked if I thought it was worth it. I listened to reasonable arguments about how many other cars could be bought for the sum, instead of just one but they held little water for me.

The Phantom exists because those who can afford it want a car that reflects their achievements in life, a reward if you will for striving to be the greatest in their field. Why then choose a car that was conceived as anything less than that itself?

Rolls-Royce remains at the pinnacle of automotive greatness; this latest Phantom Series II is the Rolls-Royce of Rolls-Royces.

Thumbs Down: Thirst and a surprisingly inexpensive feeling key.