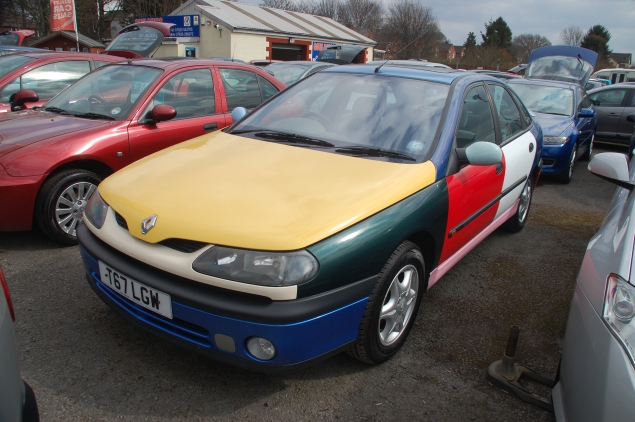 Such a dazzling coat of many colours… Who ordered the patchwork Renault Laguna?

Yes, it’s the first of April but this multi-coloured Renault Laguna is no seasonal act of Tom Foolery.

You see, this rather fine example of an RXE specification Laguna is no ordinary 90s repomobile, for it wears a coat that wouldn’t look out of place in either a Lloyd Webber musical or in John McCririck’s flamboyant wardrobe.

Every single panel of this 40,000 mile Laguna is painted a different shade of Renault’s then colour palette, ensuring that it’s highly unlikely you’ll lose it in a busy car park.

Unlike Volkswagen’s contemporary Polo Harlequin, this Laguna actually started off as a mild-mannered Monaco Blue example providing comfortable service to its first owner.

When it was traded back in, the supplying dealer decided it deserved a fresh lease of life and the makeover commenced. Laurence Llewelyn-Bowen would be so proud, dahrling.

It then enjoyed a decade of polishing and pampering as it toured around at car events showing the breadth of Renault’s range of hues until a few months ago it was unleashed into the motor trade and was spotted by Lincoln motor trader John Goulding.

With a sticker price of £1999, John’s hoping the Laguna is snapped up by a Renault fanatic or someone who’s after something more than just a bit unusual.

“It’s a super example,” says John, “with a high specification in a car that’s been really well cared for. It’s just got an unusual paint job.”