Another year, another SMMT Test Day North event in my diary, but the excitement never becomes diluted each time I hang a Newspress lanyard around my neck. The various manufacturers bring less vehicles to the regional events and owing to the more modest number of attendees, there’s always much more time to have a proper catchup with their press teams as well as meet news ones.

Of the 65ish vehicles included on the list distributed to us by the lovely Janet Wilkinson prior to the event, I only picked out four cars I really wanted to drive today. In the end, I got behind the wheel of three of them, so was quite chuffed, having spent the rest of the day chin-wagging. I know you’re all dying to know which three cars I drove, so I better get on with it!

For some reason I’d got it into my head that Dacia would be bringing a Duster, which I’ve been itching to experience for a while now – so faced with choosing between a Sandero Stepway or a Logan MCV, I plumped for the latter. What is it? A very cheap estate car, in short, priced from a mere £6,995 in Access trim. The Lauréate (top spec’) model I drove today came in at £11,150, specified with metallic paint, alloy wheels and a 7” touchscreen multimedia system with Bluetooth and European maps.

Design-wise, the Logan MCV (Maximum Capacity Vehicle) is unashamedly boxy with very little, if any, design flair – but I actually admire it for its good, honest approach. Boxy estates are usually able to carry more stuff and the Logan’s face is kind of cute. Inside, durability is the name of the game, the surfaces and controls being as basic and honest as the car’s exterior styling. The commodious boot had to be opened by turning a key in the lock and when I lifted up the floor I was pleased to see a proper spare tyre lurking underneath. I didn’t find it particularly easy to find a comfortable driving position and it took a couple of glances to realise that the electric window switches are located under the central stack and not on the door panels, but I was pleasantly surprised to see a touchscreen sat nav and multimedia system present, all-round visibility was another strong point and the gear lever had a nice action to it.

Producing the 90 horsepowers for this TCe 90 model is tasked to a 3-cylinder turbocharged petrol engine, as it happens, which has an equally diminutive 898cc capacity. Once I’d mastered the clutch which seemed to require an awful lot of travel in order to find the bite, I was really rather surprised to find that I enjoyed the Logan MCV’s little petrol heart. Slightly reminiscent of the 1-litre Ford Focus’ EcoBoost engine, the Logan’s had a nice little thrummy sound to it at times and picked up pace relatively keenly when pushed hard through its five gears. ‘Relative’ is a word you always have to keep in mind with this car, as it’s not trying to be something it’s not, so I must admit that the ride quality seemed pretty good from my brief drive in the Logan, making light work of potholes and speedbumps. MCV buyers are after an affordable, practical car, so will probably find the steering to be perfectly adequate, too. Wind noise did cheese me off on the motorway, though, and the ride was a wee bit bouncy on undulating country roads, but generally I never felt that the MCV behaved terribly in any way. Not that one can put such claims under scrutiny in under an hour, but the Logan MCV’s combined fuel economy is published as a very respectable 56.5mpg and the ‘seats down’ boot capacity of 1,518 litres sounds good to me, too.

All in all, then, the Logan MCV impressed me for what it is and has whetted my appetite even more to get behind the wheel of a Duster at long last. Jeremy, if you’re reading this, it was good to finally meet you and I hope you spotted my Vel Satis in the car park at some stage! 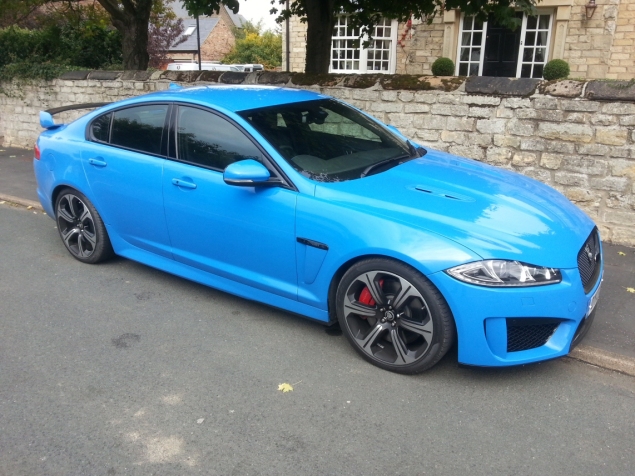 Not having squeezed the XFR-S into our schedule at the Jaguar Land Rover day at Hampton Court a few weeks ago, it was on my shortlist for SMMT Test Day North but owing to its inevitable popularity, I wasn’t sure if I’d get the chance here, either. As it happens, I’d gone over to the Jaguar table to have a general chat with Alexina and Sarah and to my surprise, someone coincidentally came back with the XFR-S keys after ten minutes or so – perfect.

Its coupé sibling, the XKR-S, is one of my favourite cars of all time, it really is – but it’s obviously lacking somewhat in the practicality stakes. The boot on the coupé is surprisingly large but even Warwick Davis would struggle to get comfy in the back seats. So would the R-S saloon instantly leap into position as my perfect car of choice?

The XFR-S has the same monstrous power as the coupé, with a 5-litre V8 supercharged engine producing 550PS at 6,500rpm, 680Nm of torque, a 0-60mph time of 4.4 seconds and a limited top speed of 186mph. Compared to the XFR saloon, the ‘R-S’ has 40PS and 55Nm more, but it’s amazing to note that its emissions and fuel consumption aren’t worsened as a result.

Okay, it’s not subtle, but in French Racing Blue, the XFR-S looks incredible to behold from any angle, with its red callipers and sizeable rear spoiler. Although the XF’s cabin design is now starting to date a little, it’s still a lovely place to be, especially with R-S logos embossed into the seats and with the blue piping and other ambiences. Rear legroom and headroom proved fine but the transmission tunnel means it’s better suited to two occupants than three.

Bizarrely, the ‘F’ came across as slightly wilder to drive than its ‘K’ sibling. It felt strangely more powerful and brutal, the thunderous acceleration shoving me back into my seat harder than in the coupé. Wheel spin and tail sliding felt more likely in the saloon and the fabulous exhaust note wasn’t quite as discernible at low speeds as in the ‘K’. Whereas the coupé always leaves me feeling refreshed, exhilarated and begging for more, the saloon required sharp wits at all times, which can prove a little tiring. I’m not complaining, I’m just observing, and I still love this car to bits. The XFR-S is a wonderful, wonderful car – don’t get me wrong. It’s cheaper than the coupé , too. It’s probably just that I’ve driven the XKR-S several times and have obviously formed a loving, lifetime bond with it, whereas today provided my first 30 minutes or so in the XFR-S – so a press car at some point in the near future would be ideal to properly get to know it. My goodness, Jaguar – you produce some truly awesome cars. Thanks again, ladies – it was great to see you again, too. 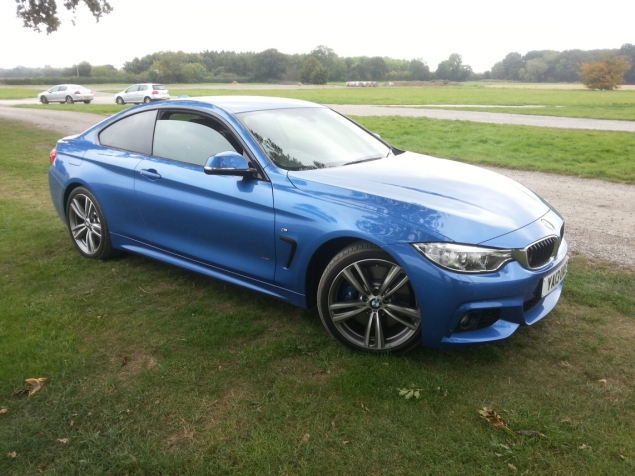 Sales of the 3 Series coupé have declined over the last six years or so and by giving their new coupé a ‘4’ badge, BMW are separating it as a new model in its own right, more exclusive and technically different from the 3 Series. The 4 Series is longer, wider and lower than the 3 Series and although its sporty design is a little conservative, I thought it looked exceptional in the legendary Estoril Blue. I could have admired its styling for hours but obviously had to get behind the wheel without delay, so duly did so and was instantly struck by the interior. Contemporary BMW cabins always feel perfectly engineered and tight in a precise way. The 4 Series’ cockpit is angled towards the driver, emphasising the sporty nature of the car. The automatic seatbelt feeder was a great help and the 6.5-inch display at the top of the dashboard was superb. I sat in the back briefly and found headroom to be very good. Legroom may be a slight issue for tall people but I had to sit quite far forwards to be able to depress the clutch, so you might be in luck if your driver’s like me. 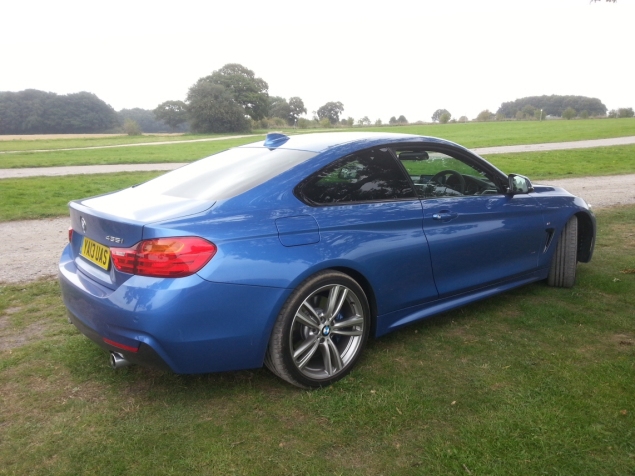 It was slightly surreal going from a 550PS, 680Nm Jaguar into a BMW 435i M Sport with ‘only’ 306bhp and a ‘mere’ 400Nm of torque, but the Bimmer continued to impress in every department. BMWs have always been renowned for their excellent handling and the 435i was no exception, cornering at speed with ease and providing heaps of fun down twisty country lanes. The 2,979cc engine provided plenty of punch in a smooth, linear fashion and had a throaty exhaust note to match. The Twin Scroll turbocharger and other technical wizardry incorporated by BMW certainly did provide torque on demand right the way through the rev’ range and made it a joy to drive. The ratios of the 6-speed manual gearbox felt nicely calibrated and the brilliantly-tuned chassis is complemented by the ability to select a driving mode to suit, from ECO PRO to Sport+. Without going into the minutiae, the throttle response was obviously reined in by ECO PRO mode, whereas Sport+ sharpened everything up quite noticeably. Comfort mode is the compromise but I only selected it for a fraction of my session in the 435i. This car definitely brought a smile to my face from early on.

Two figures impressed me after my stint in the 3-litre 4 Series. Firstly, BMW publish a combined fuel economy figure of 35.8mpg and after I and no doubt most of the other scribes had pushed it rather hard today, the dash’ was reading 29.9mpg, which isn’t bad at all. Secondly, I wouldn’t have guessed that this particular model, including all the options, would be priced at just under £50,000. I thought it would be more, so again, that was another pleasant surprise.

The 4 Series obviously made a very positive impact on me and it will be interesting to see how it performs with xDrive and with an automatic gearbox. Oh, and it was great to meet Martin at long last, along with Chris.

Thanks as always to SMMT, to the manufacturers, to all the scribes and to the staff at Wetherby Racecourse for another thoroughly enjoyable day.