The upcoming Volvo that’s got me all XCited

Hands up, I admit it – I’ve always admired SUVs, but only ones which were actually any good in one particular way or another. We’ll class the Range Rover as a SUV. It’s brilliant off-road. There’s the Porsche Cayenne, which handles fantastically sportily on-road and can get its feet dirty, too. And then there’s the Volvo XC90, with its loyal fanbase, largely down to its fairly luxurious and highly practical interior, complete with 7 seats. Having nearly taken the plunge a few times over the years, I’ve never been completely at ease with its design, especially in light of the newer, sexy-looking breed of Volvos. With the exception of the Yamaha V8, the engines haven’t cast their spell on me and it’s not terribly well-equipped to go off the beaten track. Having said that, I would still love a facelifted D5.

An all-new one’s on the way pretty soon, though, developed under Chinese firm Geely’s ownership – and it will certainly tick the styling and engine boxes, judging by the recent stream of information from the Swedish car maker. Volvo have been revealing the new XC90 from the inside out over the last month or so, releasing information on its interior before they hopefully officially reveal its exterior to the world in August. If it does indeed come heavily influenced by Volvo’s XC Coupe and other concept designs, I’ll be well chuffed.

A remarkable aspect of many Volvos was their blistering Dynaudio, erm, audio systems, and the “Premium Sound System” Harman Kardon systems from 2011 onwards sounded pretty darn good, too. For the all-new XC90, Volvo have gone the extra mile yet again and used Abbey Road acoustic technology in conjunction with revered British firm Bowers & Wilkins to produce an incredible 1,400watts audio system featuring an air-ventilated subwoofer which is actually incorporated into the structure of the car. Blimey. The new XC90 promises to be longer and wider, improving interior space and more importantly, luggage space, when those two rear seats are erected. It’s just a bit of a shame, for me at least, to learn that it’ll be slightly lower than the outgoing model, likely meaning it’ll be pants on anything more than tame grass, mud and the like. Volvo interiors have always been majestically comfortable places and the new XC90 sounds like it will up their game even further, with a huge, Tesla-esque touchscreen tablet taking centre stage on the dashboard, leaving the cabin as button-free as possible. They’ve gone all Swedish on us with the new model, working with Orrefors, who are apparently a well-known glassmaker there, to produce a gear lever made of crystal glass, along with other diamond-cut controls. Fancy stuff, I’m sure you’ll agree. The all-new XC90 is beginning to sound more like an Overfinch creation than a fairly pedestrian family SUV. 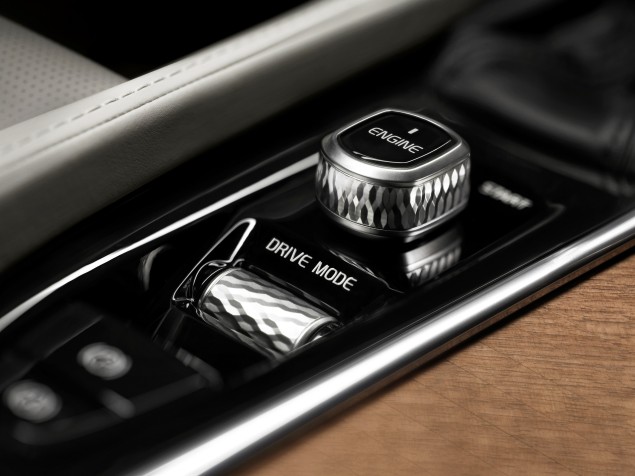 Oh, this brings us nicely on to another set of eyebrow-raising details surrounding the new XC90. Volvo have also been pioneers when it comes to car safety and the new model will showcase new technology from ‘Pedestrian Detection in darkness’ and ‘road edge and barrier detection with steer assist’ to adaptive control with, wait for it, steer assist again. Volvo are also working on Animal Detection and Autonomous Parking, the latter especially amazing me as it will see a car drive itself across and around a car park and then park itself, which is a big step forward from the parallel park assist systems which Lexus, Ford et al have introduced in recent years.

An opulent interior, strikingly modern exterior design and impressive safety credentials are all very well but 4-cylinder engines don’t exactly make me go weak at the knees. Fortunately, even the engine range offered with the new XC90 sounds very appealing indeed. I love the notion of a hybrid, plug-in electric performance car, and the new T8 Drive-E powerplant will apparently be just that, with a supercharged and turbocharged 2-litre, 4-cylinder petrol engine driving the front and an 80kw electric motor driving the back. The supercharger and turbocharger take care of the top and bottom of the power range respectively and instant torque is served up by the electric motor. On purely electric power, they reckon it will do upto 25 miles of town driving, and the figure that really pricked my attention was a combined output of 640Nm of torque and 394bhp from the two engines working at full pelt. This range-topping ‘Twin Engine hybrid’ sounds fantastic and I can’t wait to get my hands on any of the variants to compare them to the current XC90 that I spent a week with two years ago. Not wanting to wish my life away, I’m nevertheless eagerly looking forward to the official exterior reveal next month and then its appearance at the Paris Motor Show in October. Hopefully PV will be covering the new XC90’s media launch – watch this space.