A Day of Polo and Golf with Volkswagen

As I headed off to Wood Hall, nestled in the picturesque area around Wetherby, our family’s SEAT Altea workhorse had coincidentally just been replaced by a Volkswagen Golf after eight years of commendable service. Attending VW’s Regional Tour driving event, I was particularly keen to drive the Golf Plus’ successor, the SV, along with at least one variant of their facelifted Polo. 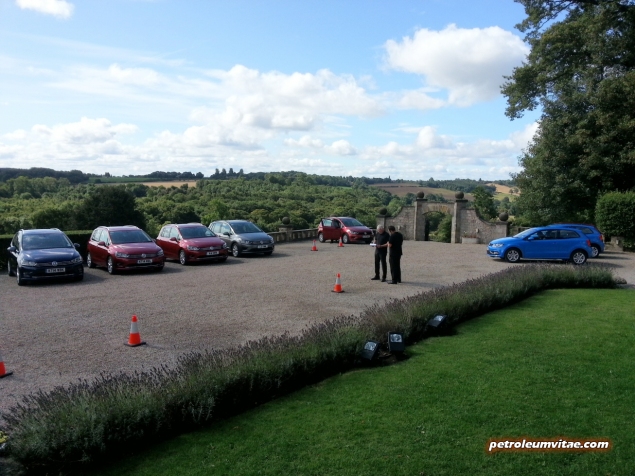 To me, the Golf SV (‘Sportsvan’ on the Continent) looks considerably larger than the Golf Plus it replaces, but it’s actually only 13.4cm longer. Compared to the latest Golf MKVII on which it’s obviously based, it’s 8cm wider and 12cm taller, with a slightly longer wheelbase which results in the SV providing bags of space, practicality and flexibility. The 500 litres of boot space (with seats up) the SV offers is 76 litres more than in its Plus predecessor, 120 litres more than a MKVII hatchback and 100 litres less than a MKVII estate. With the back seats folded the SV’s capacity increases to 1,520 litres.

I rather like the SV’s “thinking person’s” styling. All current models in the Volkswagen lineup look sharp, robust and timeless, and the SV is no exception. The extra windows incorporated in its design further enhance the SV’s spaciousness and sense of adventure, in a family holiday sense of the word. 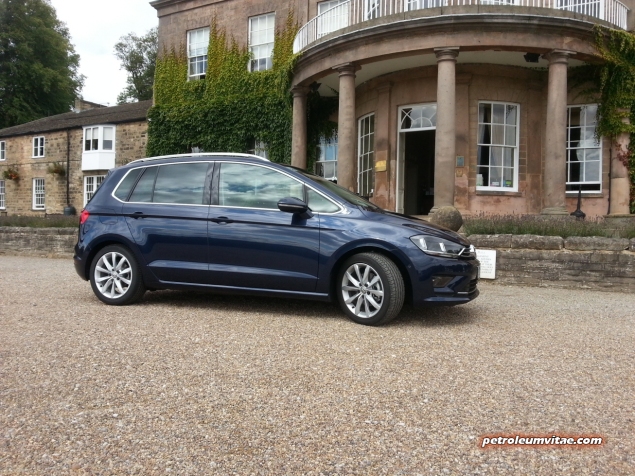 Intentionally focussing away from the 1.6-litre diesel best-seller, I specifically wanted to try the most powerful diesel version of the SV complete with an automatic gearbox. The £28,840 Night Blue Metallic colour Golf SV 2.0 TDI DSG I drove came in top-of-the-range GT trim, with folding rear tables, adaptive cruise control, Discover navigation system, wing mirrors which dip automatically when reversing, leather upholstery and a whole raft of impressive safety features. DAD digital radio is fitted to all VWs as standard nowadays and SVs all come with an electronic parking brake, which I’m a big fan of. Aside from keyless entry which would have been nice, the SV I drove lacked for nothing in my view and the build quality seemed superb. Okay, the leather wasn’t the plushest I’ve encountered, but all the controls and surfaces were impeccably presented. The black trim inserts looked very smart and the flat-bottomed steering wheel was a nice touch, with just the right number of buttons. 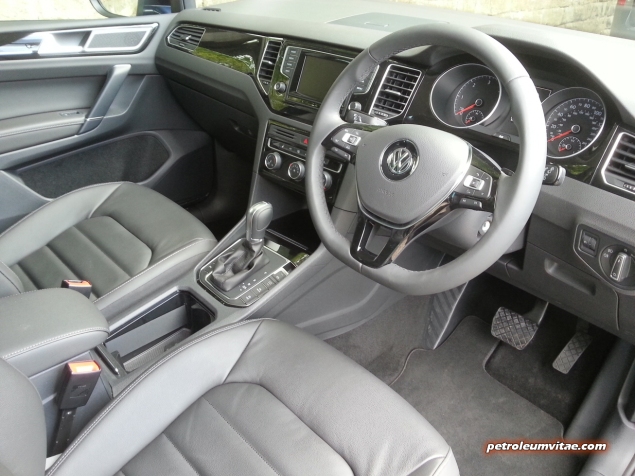 Sitting high up, it was easy to find a comfortable driving position and the amount of room on offer in the front, back and boot was fantastic. I would just note that entry for less mobile people would be improved if the front sports seats were replaced by flatter ones with less bolstering. And of course, being a short test on a media driving day, I left the proverbial kitchen sink at home as I knew there wouldn’t be time to test the SV’s load-carrying ability or day-to-day practicality. 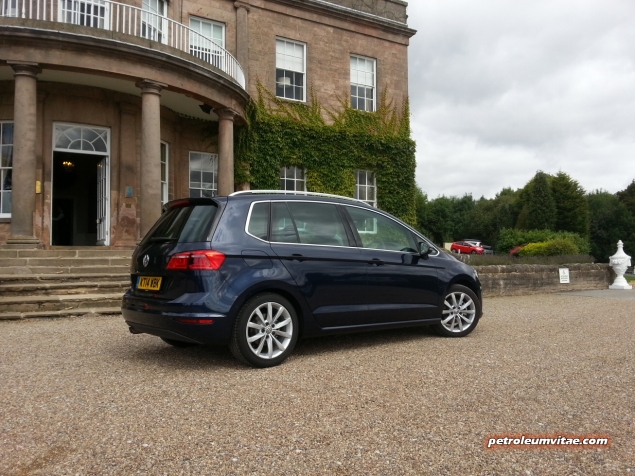 What particularly impressed me was the way the Golf SV GT 2.0 TDI DSG drove. I typically prefer to have more than 150PS at my disposal and it’s fair to say that when mated to the automatic DSG transmission, the SV isn’t going to break any straight line records. It doesn’t feel potent but is swift enough for most commuters and family motorists – and when you complement the engine and gearbox combination with the SV’s remarkably composed handling, the result is a very pleasant overall package. Actually, it was far more than just pleasant. It was a whole lot of fun, at least on the back lanes surrounding Wetherby. From cold, the DSG ‘box initially seemed a little lag-prone but soon grew on me, working its way up and down the gears smoothly. Using the paddle shifts and changing the driver profile to Sport, the SV turned into a B-road blaster, with nicely-weighted steering, impressive cornering and exceptional composure on undulating lanes and over bumps and uneven surfaces. Some may find the GT’s ride a little hard on sports suspension with 17” alloys, but I personally didn’t.

For those who don’t mind spending a little more for the badge and its associated legendary build quality, the 2-litre Golf SV DSG in GT trim presents itself as an excellent all-rounder which will keep everyone happy, from families to executives being ferried around.

Now in its fifth generation, the Volkswagen Polo has been going for nearly 40 years, having sold an impressive 14 million units around the world. The latest version hit dealerships in July with a mildly redesigned front and rear and a new range of engines which are all EU6 compliant. Volkswagen was also keen to bestow the Polo with safety and infotainment systems not typically associated with small cars like this, making them even more attractive to young drivers and mature technophiles alike. 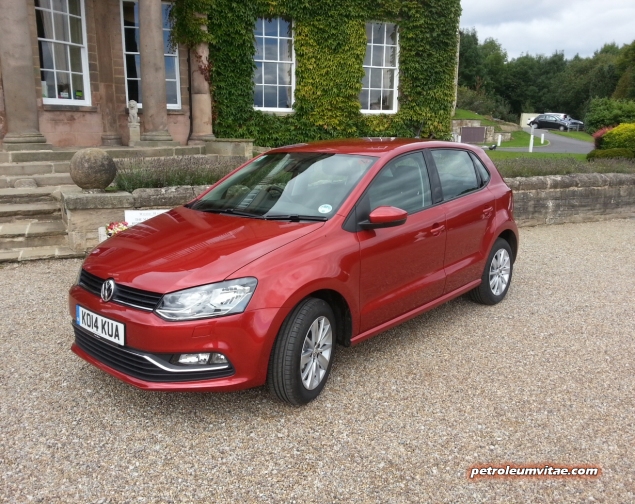 Each test car was priced just under £15,000, the 3-door diesel costing a couple of hundred pounds more than the 5-door petrol. The build quality felt very high and the latest Polo will no doubt stand the test of time. The raised equipment levels give the Polo even more maturity, all models fitted with DAB and Bluetooth, AUX, USB and SD inputs and hill-hold, the SE trim coming with a 6.5-inch colour touchscreen. It’s also a safe car, with automatic post-collision braking, ESP, traction control and driver and passenger airbags.

As with the SV I drove earlier, I was very impressed by the dynamics of the latest Polo, which handled extremely well and turned out to be a fun car to drive. It tucked into tight bends very well and felt agile at all speeds. Providing a noticeably refined ride in town, with a slick gearbox which was a joy to use, I really gelled with the Polo. I still think the Suzuki Swift Sport, which I spent a week with a couple of years ago, is hard to beat for dynamics – but in my view the Polo gives the Fiesta a run for its money. 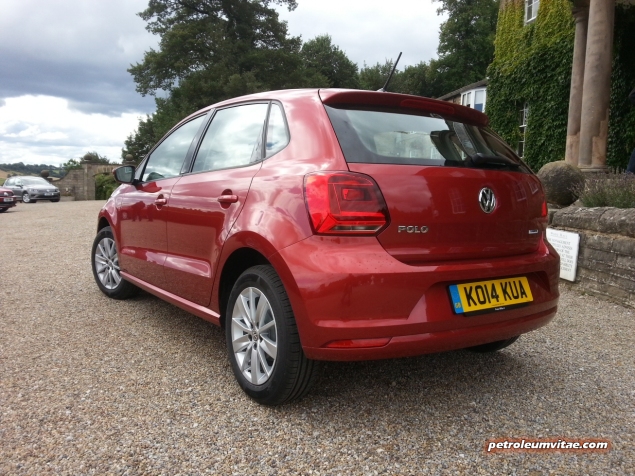 The 3-cylinder petrol engine had a tell-tale thrum to it, which encouraged me to push it zealously and eke some smiles out of the Polo. Acceleration is pretty slow so if you don’t enjoy having to work the gears energetically and put your foot down to get the best out of a car, maybe this model’s not for you. On my 10-mile(ish) test route, I averaged 47.7mpg in the 1-litre petrol Polo, which was a fair bit less than the published combined figure of 60.1mpg, but my emphasis was on finding its fun side more than anything. 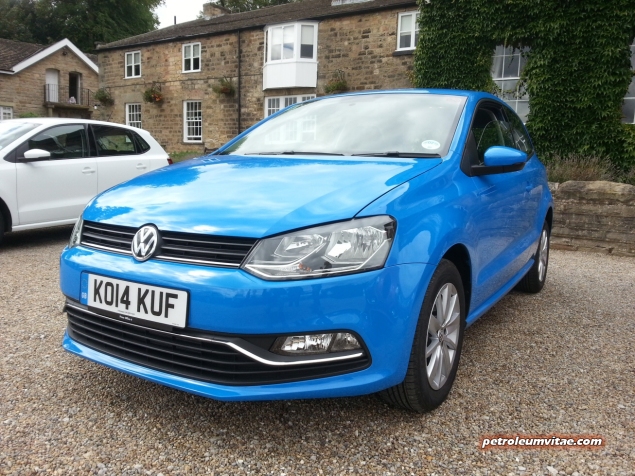 From the off, the 1.4-litre 75PS diesel Polo with its increased torque felt much punchier as expected, making the 1-litre petrol choice seem a little flat in comparison. Although the handling felt largely the same, it was nice to have the extra power available – and it wasn’t spoiled by a clattery engine note, as the Polo is an impressively refined car. I drove the same route in the same manner and averaged 56.3mpg in the diesel model. Whether you opt for a petrol or diesel Polo is really down to how many miles you drive each year and whether your driving is mainly around town or includes a fair few motorways or long trips.

If you like your supermini to be wacky, you’re probably better off considering customisable options like the Adam, Fiat 500 and Peugeot 108. If, on the other hand, you appreciate quality, solidity, refinement and maturity, the latest Polo seems a very good effort, judging by my brief encounter with it today.

Thanks once again to all the Volkswagen team for their hospitality.