Being frank, I’ve only really been attracted by larger models in the Audi range, so it would be interesting to see what I made of the latest A3 hatchback and especially one which comes with CoD. No, not a misspelling of the fishy type, but ‘Cylinder on Demand’. Earlier this year, the A3 won the Best Small Hatch category of the UK Car of the Year awards, partly owing to its desirable, aspirational image, ‘big car refinement’ and strong residuals. I better mention that it was also voted World Car of the Year for 2014, no less. I duly got stuck in to see how it stands up to its £30,440 price tag as a technologically advanced, premium hatchback of choice. 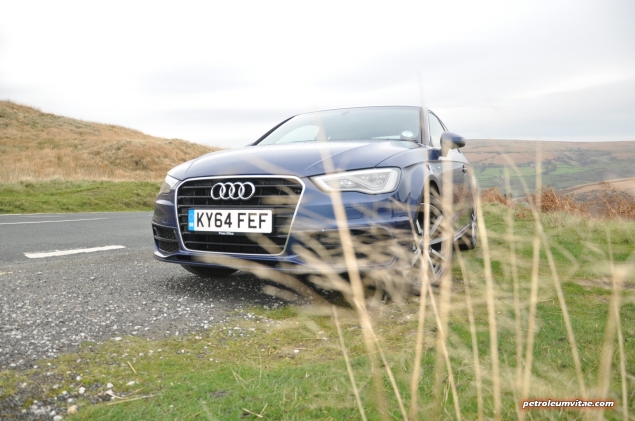 Audi’s design team have the knack of time and time again introducing incredibly subtle, evolutionary tweaks to their model range, which just keeps on becoming more and more attractive in my view. It’s amazing what a few sharpened lines, subtle creases and reworked lights can do – and the latest A3 hatchback is no exception.

Built on VAG’s new ‘MQB’ platform, this third generation, all-new A3 hatch has been to the gym and it tells, not only in its reduced weight but also its appearance. The tubby, cheerful image of the original A3 and the slightly dull design of the second generation model have been elbowed out of the way by a muscular and mean, sharp, suited and booted look. Eamonn Holmes has made way for Daniel Craig, in A3 terms.

Particularly in S-Line trim, the 10-spoke alloy wheels look purposeful, the styling gives it a ready-for-action desirability and the LED lights at the front and rear finish it off most elegantly. Audi A3s have always appealed to a wide range of buyers and I feel this latest incarnation does so even more effectively, so it’s understandable that they’re being snapped up left, right and centre by single people, couples, families and even wannabe-plutocrats.

It’s all very well chuntering on about how great a car looks on the outside, but the inside is where would-be buyers are going to be spending most of their time. In this regard, it’s fair to say that the latest A3’s interior is the mutt’s nuts. Almost every part of it oozes class without shouting about it. The doors shut even more reassuringly than on a Golf, the fine Nappa leather seats were wonderfully soft and comfortable and every button, knob, dial, switch and surface felt, looked and operated like a lot of thought had gone into it. In fact, I could quite easily have sat there habitually twiddling several of the controls. Even the cupholders are tastefully illuminated, and not many cars in the class can say that. 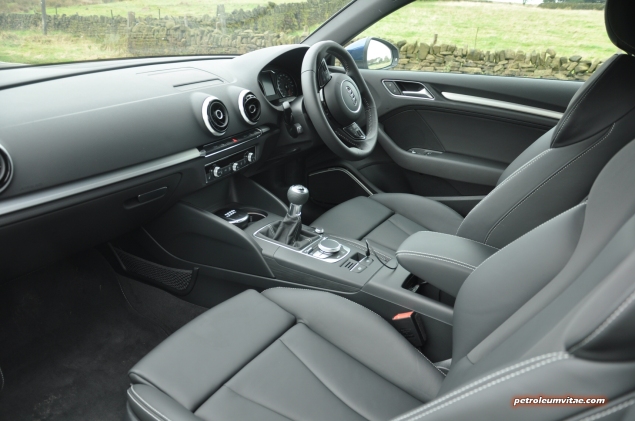 I would be here ‘til the cows come home if I listed and discussed this Scuba Blue A3 S-Line’s entire interior specification, but for me, the highlights of its really rather beautiful interior were the flat-bottom steering wheel which felt perfect in my hands, the flick switches for the hazard lights and ‘drive select’ and the large, pop-up colour screen forming part of the MMI system. I found it quite easy to master, changing DAB digital radio stations, pairing my Samsung Galaxy S3 via Bluetooth and programming the sat nav with ease. This process can actually be done using any of three methods – physically, using the MMI wheel, verbally via voice control, or with one’s left hand using Audi’s remarkable ‘Touch’ system, which allows you to scrawl letters with your pinkies, to enter town and street names into the sat nav. The Bang & Olufsen audio system was a £750 upgrade and sounded great to me. 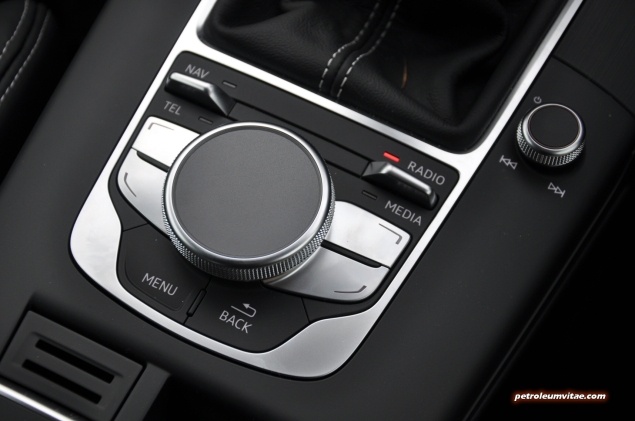 Space in the back was pretty decent, too. I didn’t find it particularly cramped or claustrophobic, spending a 30-minute journey there, although legroom on longer journeys or with regular use may become tiresome. In practical terms, the boot didn’t appear cavernous at first glance but swallowed our usual weekly shopping nevertheless. My only real criticisms over the interior and functions on this particular A3 as specified were that the front seats were only adjustable manually and not electrically, the wing mirrors had to be folded by hand, which always feels brutal, and the ignition was turned by a conventional flip-out key rather than being keyless. Other than the limited practicality compared to a 5-door A3, the actual quality of the overall interior felt just like a smaller version of an A6, so it’s no surprise that the interior contributes to the A3’s class-leading ways.

From the off, everything about the A3 felt sharp, taut and purposeful. The 1.4-litre TFSI petrol engine is near-silent when idling but when I put my foot down, the exhaust had a nice tone to it. The clutch wasn’t one of those sensitive types, the 6-speed manual gearbox had a lovely, solid, sporty shift action to it and I was surprised at how quickly the engine picked up its skirt, providing ample acceleration and power for the average UK motorist.

The ride hugely impressed me, too. Five driving modes can be selected, each with their own suspension and throttle setups: efficiency, comfort, auto, dynamic and individual. I started off in auto and then gradually worked my way round the other driving modes during my week with the A3. As expected, the throttle was slightly dulled in efficiency mode, the suspension felt a tad softer in comfort and more ready for action in dynamic, but to be fair, it was just as easy to leave it in auto and let the car decide for itself. One thing’s for sure, it tackled speedbumps like they weren’t even there, so was a pleasure to drive around our cluttered urban streets.

Out on the open, twisting, quite deserted moorland roads around Rishworth and Saddleworth, the A3 1.4 dished up fun by the bucket load, its agile ride, punchy acceleration and sharp handling really making it a car that eggs you on to push it harder. With each corner I turned into sharply, the A3’s nose obeyed instantly and the handling felt altogether impressively neutral, any understeer barely discernible. On the motorway and around town, the refined engine and sterling soundproofing resulted in a serenely smooth drive which Sade would certainly approve of.

Now, back to this Cylinder on Demand business. Audi’s TFSI petrol engines have been around for some years now, but the cylinder on demand thing has only recently begun to make its way down the pecking order to the smaller models, having earlier appeared in RS6s and S7s, for example, in which the V8 engines run on 4 cylinders when they’re able to.

In the A3 I tested, the 1.4-litre TFSI CoD engine is slightly more powerful than its non-CoD 1.4-litre sidekick, producing 140PS (which peaks at 5,000rpm) compared to 122PS. In the green days in which we live, fuel saving, efficiency and environmental friendliness are key priorities and to achieve this, the 4-cylinder engine shuts off two cylinders whenever it can, taking a mere 13 milliseconds to do so. The car cleverly susses out what you’re upto, so if you’re in slow-moving traffic, coasting or generally pottering about like Louis Armstrong with all the time in the world, it runs on 2 cylinders. It also manages to detect when you’re navigating multiple roundabouts and gets the hint when you’re in a hurry or a sporty mood, in which cases it prevents the cylinders from deactivating, giving you use of all four for safety and performance reasons.

After a week with the A3 and its CoD engine, I can say that it proved seamless and unless you really, really tune your senses, which could prove a little dangerous, most drivers wouldn’t be able to tell what it’s doing behind the scenes. The only real giveaway is the ‘2-cylinder mode’ message that appears on the instrument display from time to time. In short, the CoD technology doesn’t put a dampener on performance and the A3 proved impressively sporty and engaging, with no complaints over lack of power. For the record, its 0-62mph time is 8.3 seconds and the speed tops out at 132mph. To increase its efficiency even further, it’s fitted with a start-stop system which worked impeccably with the exception of one instance where it failed to restart, requiring an engine-off, engine-on moment at traffic lights.

If you don’t cover many miles each year, there’s little point in looking at a diesel A3, as this 1.4 TFSI CoD is really that good. It’ll be cheaper to buy, fuel and service than something like a slightly more expensive 2.0 TDI and the A3 will save high rate tax payers about £1,000 in BIK. The 1.4 TFSI CoD emits an impressively low 109g of CO2 per kilometre which is about the same as the diesels – and let’s face it, cars hardly ever achieve their published combined fuel economy figures, so I think averaging 46mpg after a week of driving 400 miles in a very mixed manner was quite good in comparison to its claimed 60mpg.

The Audi A3 1.4 TFSI CoD S-Line, significantly better than haddock. No, but seriously, this smooth operator of a premium hatchback combines an economical, punchy engine and a remarkably composed ride with a superbly appointed interior, plenty of gadgets and attractive styling. For people who don’t need five doors and have previously been obsessed with saving up for a sports-focussed limousine, downsizing into one of these latest A3 hatchbacks would make great financial sense. The latest A3s are ubiquitous but it’s clear to see why. 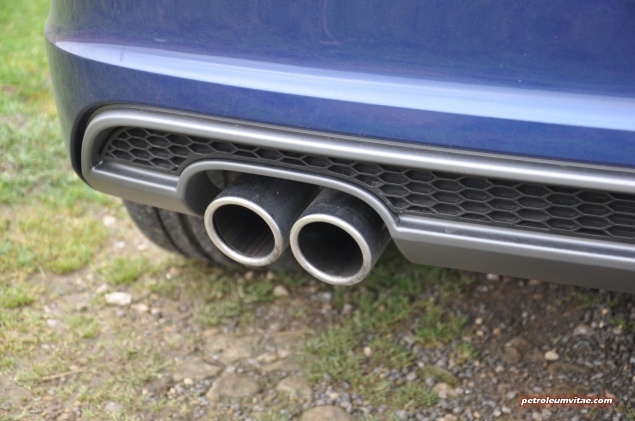