Can Suzuki’s Thai-built Celerio stick a satay skewer into the spokes of rivals’ city car sales?

If I received £1 every time someone giggled at this new A segment car’s name or swapped it playfully with that of a vegetable, it’d be a nice little earner. A name needn’t impede success, though. I’m sure Cillit Bang cleans well enough. The same principle applies to people. Take sportspersons Usain Bolt and the late Dick Trickle, for example. What someone or something does and how they do it are more important. The question is, by retiring Alto and Splash from the lineup, is Suzuki’s all-new Celerio enough to put the wind up the obvious city car alternatives? 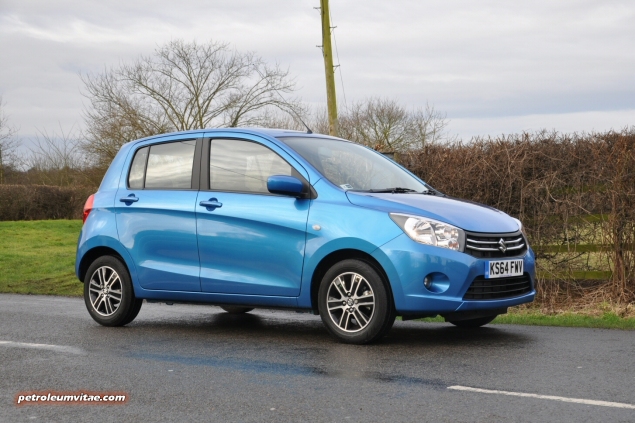 The meek shall inherit

Suzuki invited me to the UK launch, staged at Priest House Hotel, Castle Donington and attended by product and chassis engineers Messrs Suzuki and Sasaki, Engine Engineering Manager Mr Sino, and ‘Tony’ Takeshita from Suzuki GB. As a brand, clearly Suzuki knows what it’s doing, having notched up record sales of 37.4k units in the year just gone and content with remaining cemented in 22nd place when it comes to manufacturer volumes. It may surprise some folk to learn that Suzuki produces more cars than Jaguar, Alfa Romeo and Lexus respectively do, whilst Audi and BMW each make over three times as many.

Motability, contract hire and fleet sales rose nicely last year under the effective direction of Andrew Wale, Suzuki’s Corporate Sales Manager, and their rationale in competing in the 218k-annual-sales A segment with a single new model makes sense to me. Openly not even trying to serve up anything as visually stimulating as a Citroen C1, Toyota Aygo or Fiat 500, Suzuki’s Celerio is aimed firmly at scalping sales from Kia and Hyundai when it comes to value for money and from Volkswagen, Skoda and SEAT in the quality stakes. Despite the firm’s modest aspirations, the Celerio is still an important car for Suzuki, confident that brand loyalists will consider it to be a no-brainer when the time comes to part with their Altos and Splashes.

Nothing wrong with Plain Janes

Visually speaking, the Celerio is no stunner, styled in a similar vein to the Kia Picanto and Hyundai i10 – but then it doesn’t intend to raise eyebrows and I find its perfunctory cuteness quite appealing. Two trims are available, SZ3 and SZ4. Our driving was done in the latter, which in the aesthetic department adds body coloured wing mirrors, a chrome grille and black/polished 14” alloy wheels. 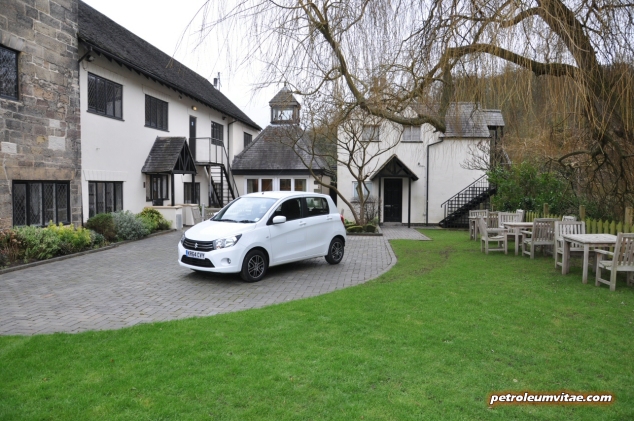 Little things make all the difference

The Celerio’s tall, square proportions work in its favour as the raised seating position is most beneficial, making this city car newcomer easy to access and see out of. The doors open impressively widely, further enhancing practicality for families, older buyers and those with restricted mobility. Its abrupt rear makes it a doddle to reverse and judge how close you are to obstacles, the windows are all nice and large, letting in plenty of light for occupants, and I was bowled over by how spacious the Celerio felt inside, with plenty of headroom for people over 6ft and a proper, usable middle seat in the back. The turning circle is impressively tight, too, and I didn’t once feel uncomfortable sat in the front. 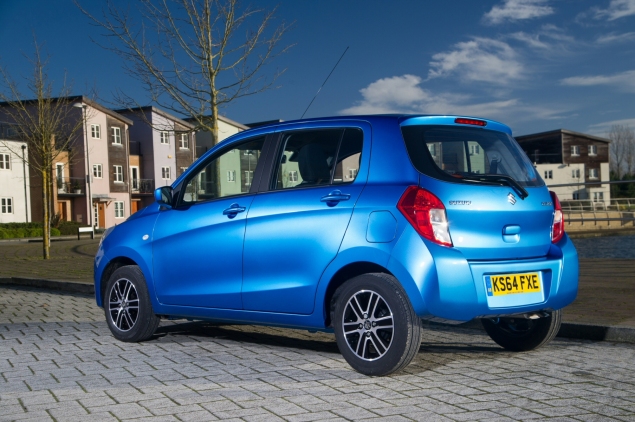 Suzuki has always excelled at producing cars with robust and largely intuitive interiors and the Celerio follows this philosophy effectively. The Citroen C1’s dashboard may be radical and more visually stimulating, but I actually thought the interior was a tad horrid when I last drove one. I was much more impressed by the Hyundai i10’s solid, mature, reasonably high quality interior. Fortunately, the Celerio is unarguably more akin to the Hyundai on the inside and although it doesn’t trouble the VW Up! in terms of ultimate class, it’s still a fine attempt. The door cards and a few other parts are undeniably flimsy but Suzuki has been clever by ensuring that the surfaces and controls regularly touched by drivers and occupants are of a decent quality. The Celerio feels like it will stand up to the test of time and everything is ergonomically sound and easy to use, from the facile but respectable stereo to the equally simplistic but effective air conditioning system.

The Celerio makes a resounding case for itself if you’re an Alto SZ3 (£6,999) or Splash SZ2 (£7,999) owner, as they weren’t fitted with ESP, whereas Suzuki’s new city car is. Steel wheels make way for alloys if you choose a Celerio, and not only does this 5-seater come with air conditioning as standard – Bluetooth, CD radio, USB connection, multi-function display, six airbags and DAB digital radio are also standard across the range. No, you haven’t misinterpreted that – it’s true. A Celerio in SZ3 trim really does cost the same as an Alto SZ4, and at £8,999 in SZ4 trim, that’s the same price as a Splash SZ3 used to cost, emphasising the bang for buck factor. 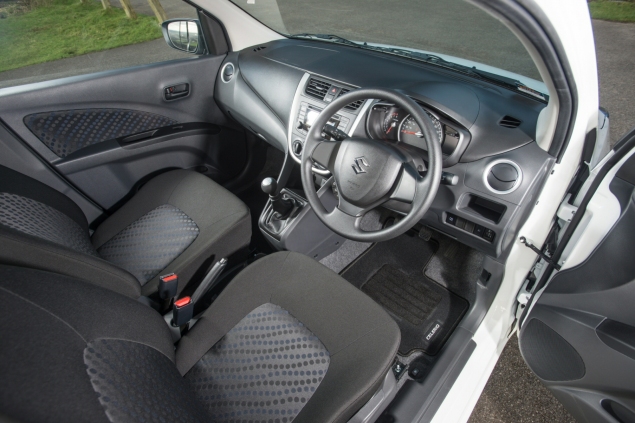 No pushover on the road

The new Suzuki’s keen pricing would be to no avail if it was awful to drive, but I’m glad to say that the experience proved rather enjoyable. Powered by a 3-cylinder, 998cc petrol engine producing 68bhp and 90Nm torque, it was never going to be quick off the blocks. Unlike the Citroen/Peugeot/Toyota’s relatively crude affair, the Celerio’s engine was noticeably muted on idle and refined on the move, until I floored it, when nothing really happened except a lot of noise was produced. The 13.5 seconds time to reach 62mph isn’t anything to rave about but it’s not that kind of car, typical Celerio buyers likely to spend most of their time in urban surroundings. It’s got a top speed of 96mph on paper and I was greeted by noticeable tyre roar and wind noise as I reached 70mph, but the decent stereo did a good job at masking the intrusions. On dual carriageways the Celerio could just about keep up with other traffic but to accelerate or overtake it meant changing down a few gears, and the same was true when tackling moderate inclines. I didn’t carry out an emergency stop en route but under moderate, everyday braking, the Celerio felt adequate and neutral, with no obvious sponginess or sharpness. 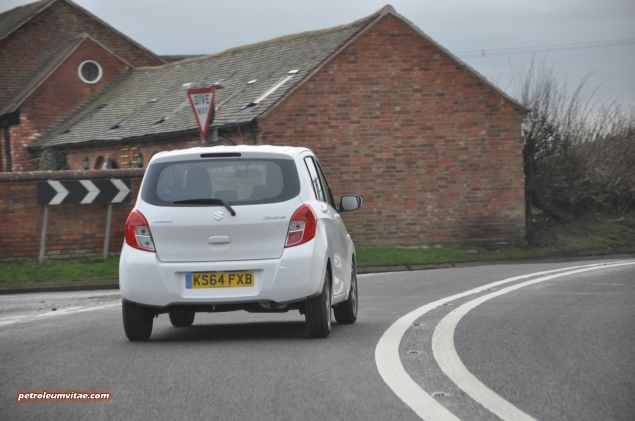 The pedestrian but mature-feeling engine was similar in characteristics to the Hyundai i10’s and what significantly impressed me about the Celerio was its 5-speed manual gearbox. It was a joy to use and wasn’t in the slightest bit notchy, so regular shifting wasn’t a chore at all. The clutch bite point may prove a little woolly for some but worked for me. The steering wheel didn’t centre itself but the feel and responsiveness were just enough to eke out a bit of fun on country roads. The ride was surprisingly excellent, too, taking crests, speed bumps and challenging camber in its stride, whilst cornering quite impressively for a car primarily designed for towns and cities. I’m confident most people who take a Celerio for a spin will be equally impressed and the way it handles is largely down to the sterling work devoted to it over the last five or so years by its technical team, who have got the centre of gravity and damping just right.

If you’re told that the Celerio has got the largest boot in the class, don’t get too excited as it only beats the i10 by a mere two litres, but the 1-litre petrol manual I tested on the launch offers very appealing CO2 emissions of only 99g/km. This marginally undercuts the Skoda, VW, SEAT, Hyundai and Fiat 500, with only the Citroen, Peugeot and Toyota trio each emitting slightly less at 95g/km with their standard engines.

April but no fools

When it comes to this trio’s 88g/km ‘eco’ engines, though, the new Suzuki will soon give them a bit of a scare, as the Celerio will be available with another engine from April 2015, called the Dualjet, emitting 84g/km. April will also herald the arrival of the Celerio in AGS guise, which is Suzuki’s attempt at offering an automatic gearbox, but it’s actually an automated manual rather than a typical torque convertor. With a manual override so you can shift up and down at will, I had the chance to take an AGS model for a quick drive at the launch and it proved a slightly lumbering affair when trying to get a hustle on and will primarily suit drivers who are less confident with a manual gearbox. At a leisurely pace it performed more pleasantly but still fell short of a conventional automatic in its fluidity. It will be interesting to see if the AGS option sells well in the Motability market. In its favour, it has a ‘creep’ system making the easier to drive in crawling traffic, with no dip in fuel economy or increase in CO2 emissions compared to the manual. In the standard manual Celerio, my partner and I didn’t exactly drive parsimoniously but still managed to average 57.7mpg over 88 miles. Compared to the published combined figure of 65.7mpg, which would have been reached with more measured driving, this was really quite good. 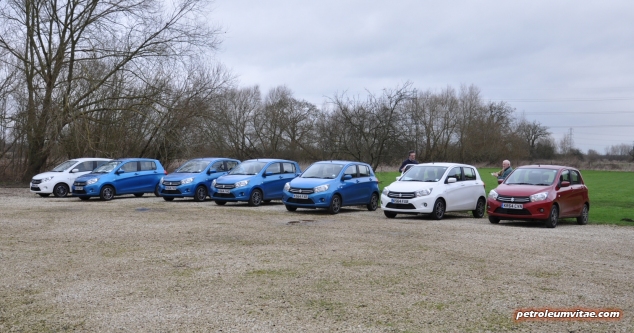 Glass’s Guide reckon the Celerio will retain 39% after three years and there will be zilch to pay in road tax thanks to its low emissions, so it’s just a shame Suzuki only offers a warranty of 3 years, compared to Hyundai’s 5 years and the 7 provided by Kia. Still, Suzuki’s generally prove reliable so this isn’t an insurmountable issue.

Unless you’re a badge snob or someone who wants to drive a car styled by a tipsy artist, the new Suzuki Celerio has a heck of a lot going for it. Its conservative exterior hides a deceptively cavernous interior in city car terms and although some of the trim is a bit flimsy in places and it’s not quite as complete as a Hyundai i10, the overall interior is a very decent effort and the Celerio comes packed full of kit as standard, from Bluetooth and air conditioning to DAB digital radio. It’s a safe car, too, with six airbags and ESP across the range. Whilst not quite as fun to drive as a Skoda Citigo or VW Up!, it equals the i10 and beats the C1/108/Aygo as far as I’m concerned, the Suzuki’s carefully tweaked chassis paying dividends. In terms of power, it feels similar to its rivals but delivers it in a smooth way except under harsh acceleration and at high speed, and the manual gearbox was a delight. Its solid build quality, low emissions, decent fuel economy and keen pricing certainly make it a very worthy city car indeed for anyone’s shortlist. Suzuki aims to sell around 6,000 and I reckon they will comfortably achieve this. The Thai-built Celerio certainly left me sataysfied.