“Go on, a bit of dirt won’t kill you”, my family used to remind me, as a squeamish boy growing up on the edge of the Yorkshire Dales. True, mud and muck wash off and much fun can be had from encountering them, but I’ve still never developed any real magnetism to them, in the way a pig does with a puddle. Talking of pigs, it was quite hilarious being chased by one, witnessing it frantically bustling towards us, courtesy of the multitude of cameras on board the Range Rover Sport. Sadly, I don’t suppose many of these ubiquitous vehicles ever experience more than a grass verge, farm track or deep puddle throughout their lives. You can bet your bottom dollar ours did, though.

You may recall that last spring, we ambitiously covered six hundred and fifty miles in twenty four hours, driving from Manchester to Brighton, eastwards along the coast and then back up again, in a ‘blue top’ Range Rover Autobiography. It’ll go down as one of the most memorable, magical road trips on home soil, largely thanks to the lavish interior and charming SDV8 engine. A much more modest trip was on the cards this year, when we headed to the delightful, historically rich and vibrant city of Cambridge for a family reunion. This time, our chariot was a 2015 Range Rover Sport in HSE Dynamic specification, powered by the latest SDV6 powerplant. The whole trip took almost as long as Brighton did, dratted 50mph average speed limits blighting nearly our entire journey. Still, at least we had a ‘lording it over’ driving position and were seated in relative luxury.

I say relative because, despite its opulent appearance and aura, the Sport’s interior didn’t prove to be quite as comfortable or luxurious as last year’s ‘full fat’ Autobiography, in which the leather was softer, the seats slightly larger and more accommodating and legroom more generous. Admittedly it was a four-seater version, though, and this year’s Range Rover Sport HSE Dynamic’s interior still put lesser rivals to shame. Landcruisers, Touaregs and the like just don’t ooze that je ne sais quoi a Range Rover does. 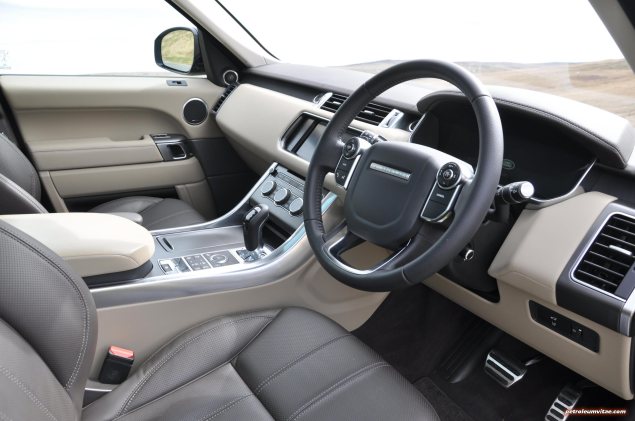 The original Sport felt a tad claustrophobic, but not so the new one, which is a huge improvement in terms of airiness and space, albeit with less comfort room than the full four-seater Autobiography. Okay, the touchscreen system for the sat nav, entertainment and car settings looks and feels old-fashioned now, but the dual view TV screen still makes me smile each and every time I use it and it felt special sat at the wheel of the Sport. The panoramic roof allowed the espresso, almond and ivory cabin to be bathed in light whenever the skies obliged, the Meridian audio system did the trick once again in sounding pretty darn good to me, and the Sport was fitted with considerably more driver aids than last year’s SDV8. Like a large percentage of engines these days, the Sport’s SDV6 is fitted with stop/start which helps reduce emissions and improve fuel economy, and our test vehicle also came with a useful head up display, parking assistance including parallel park, lane departure and blind spot warnings and road sign recognition. Long journeys were made even more pleasurable thanks to queue assist, adaptive cruise control and auto high beam headlights, and onlookers were impressed by the Range Rover Sport silhouette cast onto the ground by the puddle lights. Admittedly this may be a rather superfluous touch, but at least it shows thought has gone into it. Typically for a Range Rover, most of the buttons remained nice and chunky for improved operation when wearing gloves.

The Sport had the added practicality of seven seats, the rearmost seats only really suited to shorter journeys or diminutively built people, though. The seats erected and folded flat again at the touch of a button, which was also true of the tow bar. Boot space was on the tight side with all seven seats in place, so the Sport probably isn’t ultimately suitable for a family of seven to take on an outdoor adventure holiday to Cornwall, for example.

Unless ‘access height’ was selected, a pair of stepladders would’ve come in handy as the latest Range Rover Sport is only 5cm lower and 15cm shorter, give or take, than its marginally bigger brother. In the flesh, the Sport looks every bit as colossal and is positioned as the more sporty option, funnily enough, bridging the gap between the big one and the much more compact Evoque. The boxy aesthetics of previous Range Rovers made way for subtle, Evoque-inspired curves when the all-new one was launched a few years ago, and the 2015 Sport follows suit, its corners chamfered, various lines and creases tweaked and the roofline tapered to endow it with a more aggressive stance. If you saw a Sport steaming up behind you in your rear view mirror, you’d be hard pushed to differentiate it from the full Range Rover and it holds just as much presence on the road, parked outside Selfridges or negotiating genuinely taxing terrain. 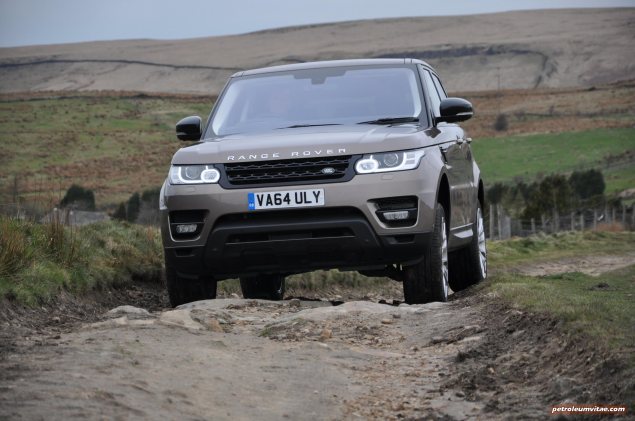 Like last year’s SDV8 Autobiography, the Sport SDV6 also sported attractive 21” alloys, but the difference between the two vehicles was obvious from the word go, the Sport’s firmness contrasting starkly with the Autobiography’s ability to waft over speedbumps and potholes as if on a bed of cream. One can’t have it all, though, the full Range Rover not exactly being known for its agile, athletic chassis – which is where the Sport comes in. In my book, it really did live up to its name, sharp cornering and B-road blasts proving to be rewarding and pretty good fun. The original Sport was actually slightly harder than the new one, so if you’re upgrading, you’ll be in your element as the new model is an improvement all round.

I’ve always had an inseparable attraction to V8s, both petrol and diesel, and was wholly smitten with the SDV8 at the heart of last spring’s Autobiography. Fine, it wasn’t free of lag and predictably couldn’t sprint off the blocks as ridiculously fast as the 5-litre petrol option, but as an overall engine, I suspected the SDV8 couldn’t really be equalled in terms of grunt, smoothness and relative economy in a vehicle of this size. I really did expect this year’s Range Rover Sport’s SDV6 unit to be a limp lettuce, so have had to eat a large slice of humble pie. Actually, having spent a week with both the pre-tweaked SDV8 in the full Range Rover and the revised SDV6 in the latest Sport, I don’t feel that there’s much real-world difference between them when it comes to refinement and performance. Both may take a wee bit of time to actually get upto speed, but once there, they each perform superbly. The 2015 Range Rover Sport’s 306bhp SDV6 is only 33bhp and 40Nm down on the recently revised SDV8 for the full Range Rover, and I found the V6 so creamily wonderful that I recommend it wholeheartedly. The brochure figure for the SDV6’s combined fuel consumption is 40.4mpg and considering the engine only had a few hundred miles on it when my test Sport arrived, achieving an average of 36.6mpg after 450 mixed miles is very impressive. I’ve not driven a full Range Rover with the 258bhp TDV6 engine or 340bhp SDV6 hybrid setup, but taking the Range Rover Sport SDV6 in isolation with its 700Nm torque and attainable consumption figures, I’d be delighted to take ownership of one. 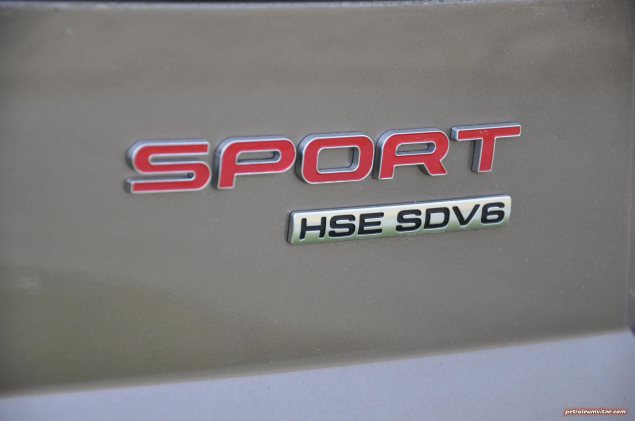 What’s the point in buying a state of the art mountain bike and merely riding it around your local village or town centre, or investing a sizeable chunk of money in the latest wetsuit, only to confine its use to your bathtub? Returning home after our little off-road adventure, various passing motorists saluted us, including several Range Rover, Defender, Jeep and Landcruiser owners. They seemed truly and pleasantly surprised to behold a Range Rover Sport that had actually seen a bit of mud. At several points, we had two wheels off the ground, got to try out hill descent control, watched in fascination as the TFT display told us where power was being sent and when the differentials were locked, and used low range to tackle certain more difficult stretches. Admittedly we only really scratched the surface but the Terrain Response 2 system certainly felt like one that was up to the task and articulation seemed very good. I just wonder whether such clever electronic systems will prove as reliable and dependable as good, old-fashioned levers and other more rudimentary 4×4 controls and mechanicals.

The SDV8 Autobiography I drove last year cost a whopping £102,000 after options, making £77,500 for the 2015 Range Rover Sport as tested feel like something of a relative bargain. The Sport is just as capable off the beaten track but unarguably firmer on it if wearing 21” wheels, and just felt slightly less comfortable and plush inside, in HSE Dynamic trim. I’m just nit-picking, though, and if an athletic rather than pampering ride is more your cup of tea, the Sport would make a great choice. It will look the part outside the office, the school, Selfridges, on the open road, wading across a river or being chased by an escaped pig. Okay, perhaps forget the pig. Come to think of it, perhaps in the porcine world, the equivalent of “pigs might fly” might be “muddy Range Rover.” In any case, a bit of mud didn’t harm the Range Rover Sport and it didn’t harm me, either. 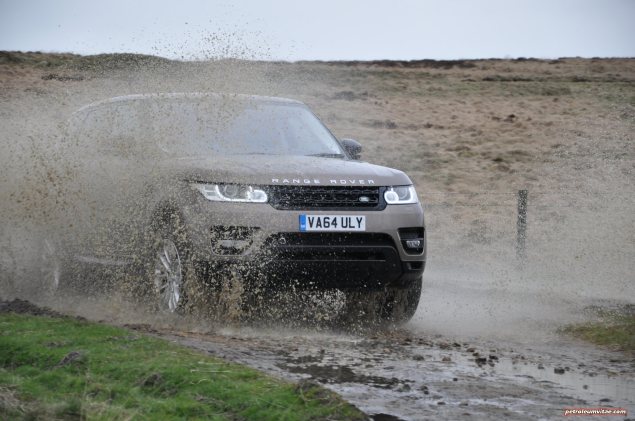