The car that kiboshed my bank holiday plans

We had it all planned out. The Saturday of the spring bank holiday weekend saw us breakfasting with friends in the morning. In the afternoon, we intended to go on a countryside walk. Sunday was all about a three-hour drive south to attend a family event and Monday was going to be a day of spring-cleaning, cutting the lawn and finally getting round to tackling a few much-procrastinated jobs around the house. The problem was, Monday evening came and the ‘to-do list’ hadn’t budged. I blame it all on the Mazda2. 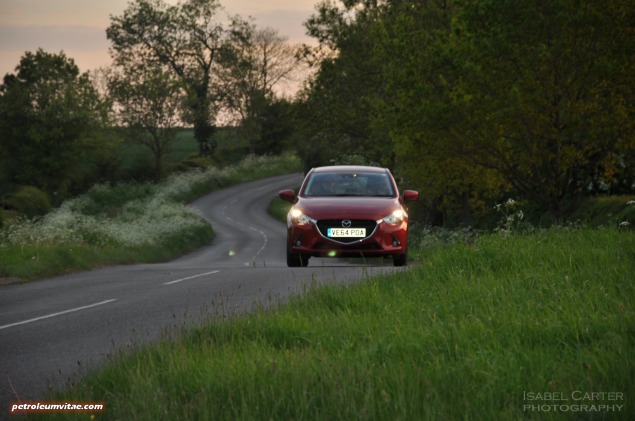 This little car has given me a serious addiction. It simply is that good. Any vague excuse has seen my wife and me in a race for the keyfob. In fact, thinking about the week’s shopping list, I’m tempted to go and get the puddings from Yorkshire, the cheese from Cheddar and the fish from Fleetwood. I can’t afford the time or petrol, though. Bummer. 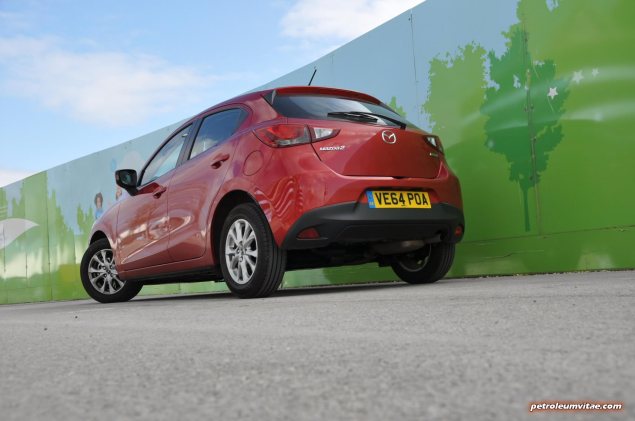 When the all-new Mazda6 arrived in the UK in 2013, its muscular, sleek and downright sexy ‘KODO – Soul of Motion’ styling instantly won me over. The all-new Mazda3 followed suit in 2014, spicing up the rather conservative hatchback segment, and I’m glad to see that the all-new Mazda2 has been given the KODO treatment, too. The aggressive, chrome-lined grille, menacing headlights, forward-leaning stance, sweeping curves and strong shoulders certainly make the Mazda2 stand out when compared to a Hyundai i10 or Volkswagen Polo. Even the fog lamp surrounds have been thoughtfully styled. The colour palette available for the Mazda2 contains some real gems such as Dynamic Blue Mica and Smokey Rose Mica, but our test car was predictably daubed in Mazda’s favourite, Soul Red. 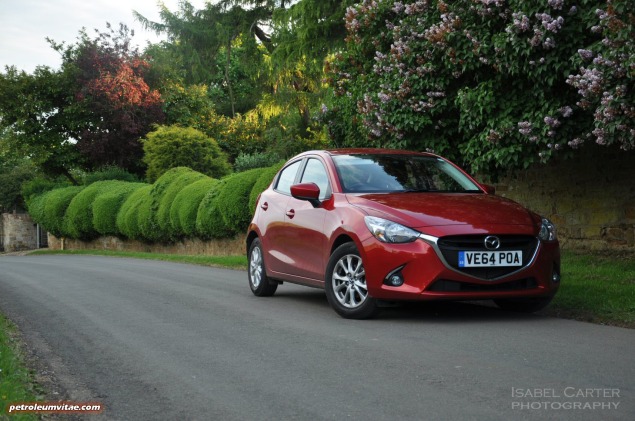 Mazda reckons the ‘2’ in 1.5-litre 90PS petrol SE-L Nav guise will be the best seller and, judging by the interior, it’s quite clear to understand why. With a leather-trimmed steering wheel and gearstick, Bluetooth, cruise control, speed limiter and other controls mounted on the steering wheel, DAB radio, rear electric windows, lane departure warning system, hill hold assist and smart city brake support all included for an impressive £15,045, the Mazda2 isn’t short of kit. The ‘Nav’ part of the spec’ refers to the 7-inch colour sat nav and multimedia system incorporated into the dashboard. Working in conjunction with a rotary knob similar to iDrive in a BMW, it’s quite simply the most intuitive and informative sat nav and infotainment system I have ever used. A few surfaces and materials felt a tad flimsy but the padded leather armrests, carbon fibre effect trim and fighter jet inspired circular air vents endowed the Mazda2’s interior with a healthy touch of class. Sport spec’ cars can be fitted with light stone leather with black inserts and red stitching, which looks awesome. 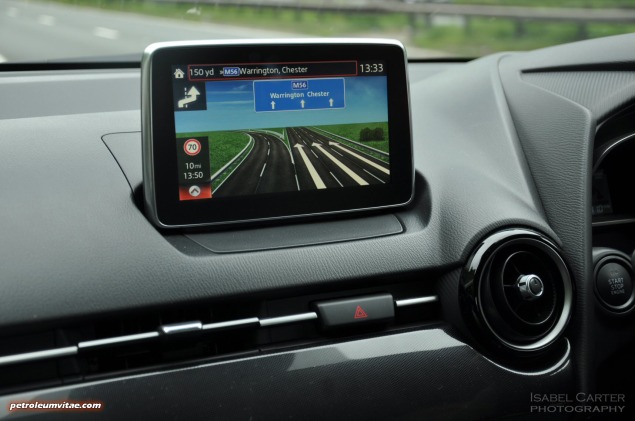 Mazda has used special vibration-supressing materials and it really does tell. With plenty of room for four 6-foot, well-built adults, a decent boot only marred by the loading lip and 60:40 split-folding rear seats, it’s a very practical car, too, with a usefully-sized glovebox and plenty of storage bins, cupholders and the like, plus two USB sockets and an AUX input jack. It’s just a shame pockets aren’t fitted to the seatbacks and that keyless ignition doesn’t also mean keyless entry. I was very impressed to see electric folding wing mirrors included, as they are often consigned to costly options lists, even on large, premium cars. What Mazda has achieved is remarkable and in my view the 2’s button-scarce interior betters the current Fiesta’s and generally feels much more instinctively implemented and driver-focussed than other rivals, too.

With a striking exterior and a comfortable, roomy, well-equipped and ergonomically brilliant interior, it’d be a travesty if the Mazda2 fell flat on its face when it came to the driving experience. Fortunately, it turned out to be an absolute corker. 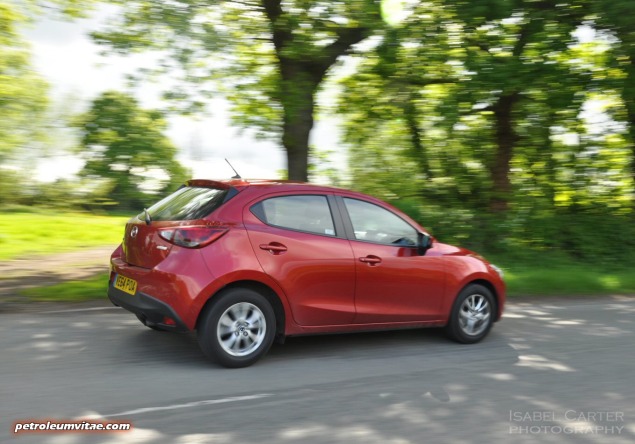 The 1.5-litre (90PS) SKYACTIV-G petrol engine in the new Mazda2 is a detuned version of that found in the latest MX-5 and has a nice sound to it, without being enhanced by a sporty exhaust. Actually, every Mazda2, from the 75PS to the 115PS is powered by a 1.5-litre engine, even the 105PS diesel. The 90PS is a little coarse when the car’s first started but soon settles down, becoming a lesson in refinement. The light clutch is easy to get on with and the gearstick is notch-free, proving a joy to snick through the five ratios like a proper, old-school sports car. Producing a peak of 90PS, I knew this entry level Mazda2 wouldn’t be a pocket rocket in terms of straight line performance and indeed the gearbox needs working hard to get any serious momentum out of it, but the fun doesn’t diminish. Motorway slip roads and general inclines aren’t a problem in power terms as long as 4th gear is used as infrequently as possible as it seems to coincide with a flat spot, and the little Mazda2 does an admirable job of keeping up with rep-mobiles in the fast lane, fuel consumption actually improving when you drive faster than you probably should. The engine itself isn’t particularly noisy on the motorway but road and wind noise do increase. In strong crosswinds, the Mazda2 doesn’t get buffeted around and feels relatively planted for such a tiddler. 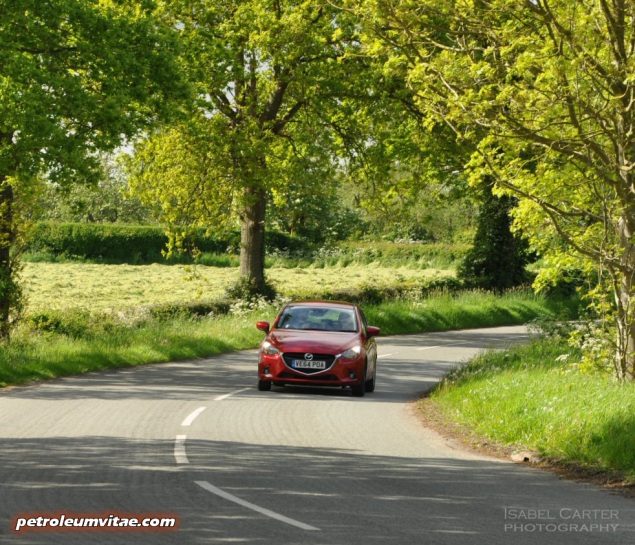 The turning circle is ridiculously small, too, meaning it’s an absolute doddle to get in and out of tight car parks or turn around when you get lost. Visibility is also generally good, the large wing mirrors helping proceedings. The thick A-pillars do sometimes obscure the view at junctions a little, though. Mazda’s i-stop start/stop system flies the environmental flag and keeps things hushed at the same time, but it failed to restart on a couple of occasions, when about to enter a roundabout and in a slow-moving queue. 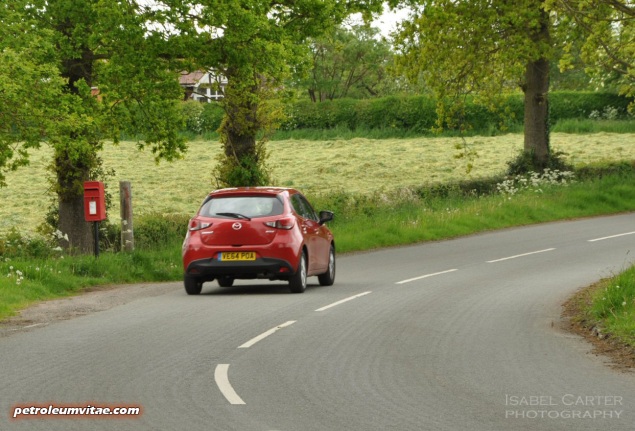 Pigs are at home in mud, eagles are in their element soaring on thermals and by the same token, the Mazda2 is an absolute blast in B-road Britain. The power deficiencies in 4th gear and right at the top of the rev band are compensated for by a truly engaging driving experience, no doubt aided by Mazda’s SKYACTIV chassis technology. Even with all the aforementioned kit thrown in, the Mazda2 90PS only weighs just over a tonne, making up for its modest 148Nm torque at 4,000rpm. Reaching 62mph takes 9.4 seconds on paper but for me, this car is about handling thrills rather than tearing around. The EPAS (Electronic Power Assist System) steering setup is a revelation, too, not just allowing but encouraging spirited, high-speed cornering, without a hint of body roll. Admittedly it feels quite light, but it’s spot on in terms of responsiveness. 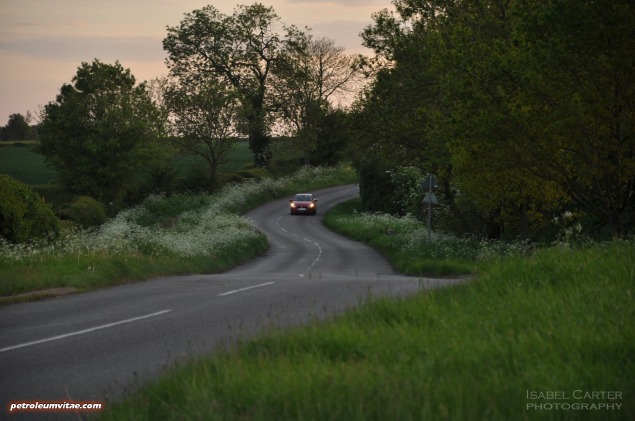 The eco-friendly Dunlop tyres fitted to the 15” alloys provide decent levels of grip but do let go eventually, the resulting slide easy to keep in check nevertheless. The tyres address speed bumps and potholes impressively, too, meaning the overall ride doesn’t feel compromised and is just as good at urbanity as it is at hurtling around twisty lanes. Considering this is the SE-L version and not a Mazda2 in Sport guise, the engineers have done a sterling job. It’s not bad on fuel, either, averaging 55.4mpg after 485 miles, at which point it was nearly out of juice. The official figure is 62.8mpg combined, so bearing in mind the test car had only covered 3,000 miles, it would seem high-50s is certainly achievable. 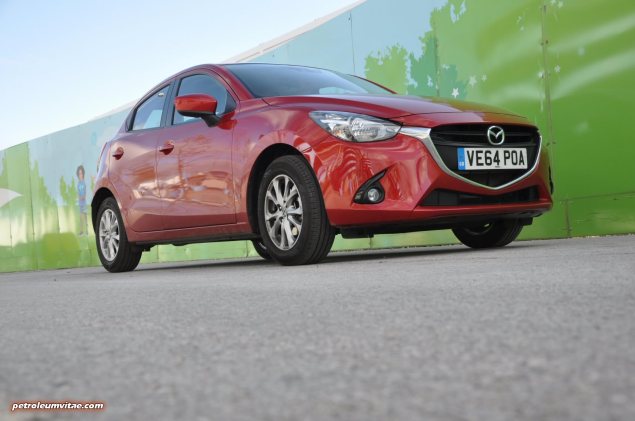 The spring cleaning never really got started, the lawn still needs cutting and the other DIY jobs have been procrastinated yet again, this time thanks to having become addicted to the Mazda2, which in my view gives the Fiesta a serious run for its money. In fact, give me £15,000 to spend on a well-equipped supermini with an engaging drive and I’d go straight out to buy a Mazda2. It stole my bank holiday weekend and it’s stolen my heart, too. 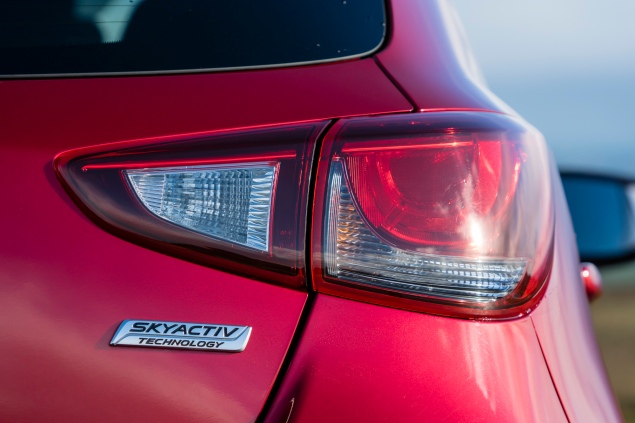