Moons ago, to bag yourself a ride with some nice people wearing white coats, all you’d have needed to do was exclaim in certain circles that a ŠKODA was an object of desire. Faces of the more liberal in society would’ve registered the same perplexity my wife does whenever I fleetingly mention the names of certain lesser-known actresses I perceive as attractive. Now, though, having joined the VW clan, ŠKODA’s image has been turned on its head in one hell of a transformation story, and describing one of several notable models in the firm’s lineup as desirous will afford you a pat on the back from anyone who knows anything about cars. The Superb flagship in its most recent incarnations has particularly garnered fans from varied walks of life – and the all-new generation promises to be better than ever. 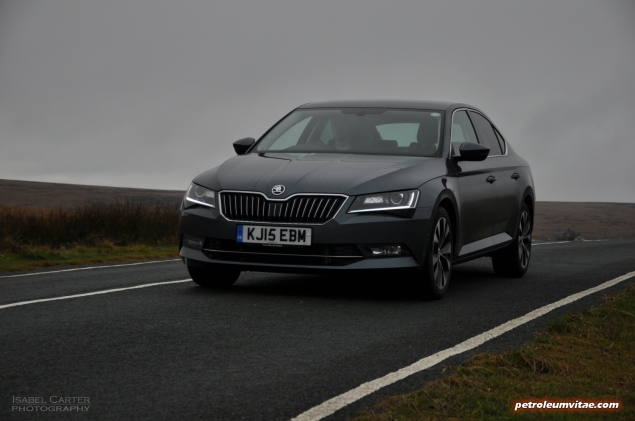 The all-new Superb’s vast proportions are adeptly carried by masterly hewn styling, characterised by sharp, elegant lines that whisper, not shout. The confident grille is flanked by subtly aggressive Bi-Xenon headlights, and sexily captivating front and rear LEDs bring a healthy dose of modernity to the mix. Mazda6 aside, the ŠKODA’s aesthetics unassumingly and almost apologetically better those of its main rivals, including its cousin, the Passat. In fact, the Superb wouldn’t look incongruous alongside the A6, 5 Series and E Class.

Fastidiously and robustly constructed, the new Superb’s interior matches the VW Passat for quality. The ‘SE L Executive’ trim Superb I tested for a week sits just below the range-topping Laurin & Klement models. The Alcantara seats with leather outers are supremely comfortable, although I would specify my Superb with full quilted leather in a lighter, less sombre colour. The Apple CarPlay and Android Auto compatible 8-inch touchscreen with Columbus sat nav looks sophisticated and functions well as part of an ergonomically sound cabin. 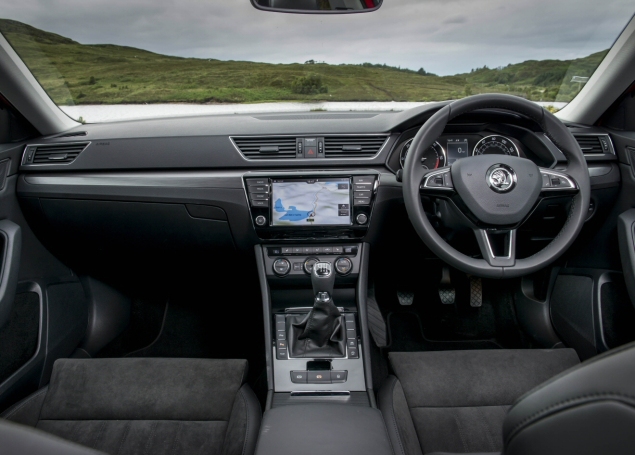 ŠKODA’s Superb has long been renowned for providing an immense amount of space for the price tag and head, shoulder, elbow and legroom are as ever abundant in the new model, which sits on a longer, wider platform. Offering a ridiculously massive 625 litres with the rear seats raised and 1,760 litres when folded, it trounces the Mondeo hatchback for size and even beats the Audi A6 Avant in litres. Its predecessor’s ‘twindoor’ tailgate has made way for conventionality, albeit electrically-opening, with foot gesture operation optional.

Both front doors now house an umbrella each, there’s an ice scraper under the fuel cap, the boot light is integrated in the form of a portable, rechargeable torch, there are umpteen hooks, nets, straps and compartments in the boot, along with generous storage cubbies and a waste bin, and the ingenious cupholder allows bottles to be twisted open singlehandedly, all these features provided through ŠKODA’s ‘Simply Clever’ program. 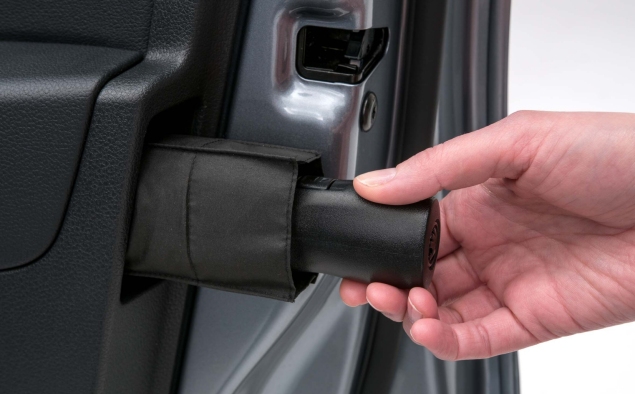 The all-new Superb has been awarded a 5-star safety rating by EURO NCAP, and Park Assist takes the stress out of parallel and perpendicular parking. CAP has forecast class-leading 48% residuals after 36 months and, heck, even my local mayor is wafted around in a Superb hatch. Airport transfer, chauffeur firms and upmarket taxi companies all love this Czech hero, the bulk of its sales expected to be racked up in the fleet market, pitched to peel company car drivers away from Mondeo, Insignia, Passat and even A4, C Class and 3 Series at a push.

On the road, the new Superb, 75kg lighter than its forerunner, feels as light as a feather to drive. Comfort and Sport modes are selectable using Dynamic Chassis Control and the latter does what it says on the tin, firming up the chassis and sharpening the throttle response for more zealous driving, but the Superb is best left in Standard, providing an effortless ride. Diesel thrum is discernible when it’s given the beans and the occasionally whirly DSG transmission kicks down, but otherwise, it’s a creamy experience, nicely insulated from the outside world, with barely perceptible gear shifts. The steering feels a little detached and artificial but the suspension is nicely damped, the Superb not ending up red-faced in the bends. 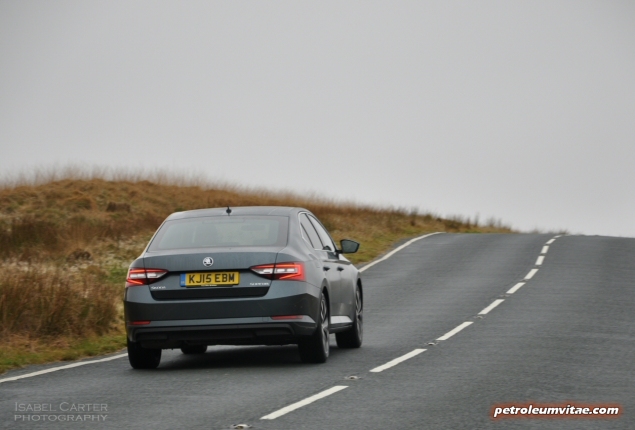 I covered 250 miles during my week with it, divided equally between urban/rural and motorway driving. Averaging 52.4mpg in the process is pretty good, having chauffeured four elves at one point. Don’t ask. Priced at £31,625 as tested, this 2-litre, 190PS Superb with 18” wheels emits 119g/km CO2 and sits in VED band C, meaning its BIK rate is 21% for year one and 25% for year three. The less gutsy and lower-equipped Superb models will likely prove the fleet darlings, but for business and private motorists seeking a bit of luxury, SE L Executive trim provides serious bang for one’s buck. ŠKODA love now considered socially acceptable, legal and actually quite cool, the all-new Superb is unarguably desirous and in many ways does indeed live up to its name.