Jaguar XE S – does the Brit cat leave Ze Germans in a flap?

According to the Indian-owned British luxury car manufacturer’s PR machine, the new Jaguar XE “redefines the concept of the sports saloon” and is “the driver’s car in the global premium mid-size segment.” Blimey, bold claims, which will surely vex BMW, whose perennial champion the 3 Series has long been regarded as the ultimate driving machine. Has Jaguar succeeded in producing a sports saloon capable of toppling the Teutonic trio, a car that is close to feeling “alive”, which is what motivated the firm’s founder, Sir William Lyons?

The XE S holds its own in the looks department thanks to a sleek, aggressive, evocative front end, endowed with extra edginess by the S bodykit, red brake callipers and J-blade daytime running lights, along with gloss black grille and side power vents courtesy of the optional Black Pack Plus. The XE S with its coupé-like proportions looks a peach from the front and side, balancing menace with beauty, particularly when shod with 20” Propeller alloys. Despite the clear F-Type echoes, its derriere appears a little stunted and pedestrian, especially when the red light clusters blend into Italian Racing Red paint. It’s also a tad tricky to work out at a glance whether a Jaguar looming up in one’s rear-view mirror is an XE or XF, but Russian doll design is something nearly all marques have adopted.

Inside, Jaguar’s XE S is a mixed bag. Space in the front is perfectly adequate but back-seat passengers above average height and girth will find the rear quite cramped, restrictive leg and shoulder room limiting its practicality for medium or longer journeys. The new infotainment system instantly reminded me of Suzuki’s at first, but I warmed to it in the end, the menus proving intuitive. The apps work well, InControl allowing un/locking, timed climate and engine start to be controlled by smartphone, and Android Auto and Apple CarPlay are supported. The 825W Meridian sound system performs thoroughly decently and although I’m not a fan of head-up displays, the XE’s forms a regular conversation piece. When the XF was launched, the motorised air vents were nothing more than a superfluous party piece and have sensibly been dropped for XE, which I’m glad still deservedly retains JLR’s rotary gear selector.

Two-tone pews are mandatory for the XE S but more discrete palette selections are fortunately available as alternatives to the test car’s divisive Jet & Red Taurus combination. It’s just disappointing that the leather is rather Korean or American to the touch, lacking the kind of quality associated with the Germans and indeed Brits. Some of the switchgear also feels quite flimsy and unbefitting for a Jaguar, but at least the touchscreen’s integration doesn’t look like Mercedes’ afterthought of an effort, which is akin to a tablet bolted on top. As a whole, the XE S’s interior is ergonomically sound, feature-packed and theoretically stylish.

To stand any chance of claiming top spot in the ‘warm’ corner of the mid-size premium saloon market, the XE S simply can’t afford to be a damp squib in the handling stakes on UK roads. Fortunately for Jaguar, the XE S is largely brilliant. Its supercharged 3-litre V6 engine comes from the base F-Type and, frankly, the 340PS it produces, along with a 0-62mph time of 4.9 seconds and a top speed of 155mph are more than enough and can be explored more fully than a V8, dishing up dollops of fun for drivers across the experience spectrum. In alcoholic terms, the XE is a vodka of middling proof as opposed to ‘Raki’ firewater from Crete – not fiery enough to bite one’s head off, but still potent enough to make one’s eyes water.

Delivering its power in a smooth, linear fashion, the engine certainly propels Jaguar’s compact sports saloon towards the horizon quickly enough and provides manageable fun for drivers of varying competencies, whilst the 8-speed ZF automatic transmission performs largely impeccably. It’s easy to ask the Midlands’ latest sports saloon to morph from a docile domestic moggy into an aggressive jaguar in an instant – but even when its claws are primed in Dynamic mode, the thrills are served up in a controllable fashion. The XE S is aurally rather subdued, though, lacking any mellifluous delights, even when pushed hard. If only the F-Type’s active sports exhaust system could be included on the options list. 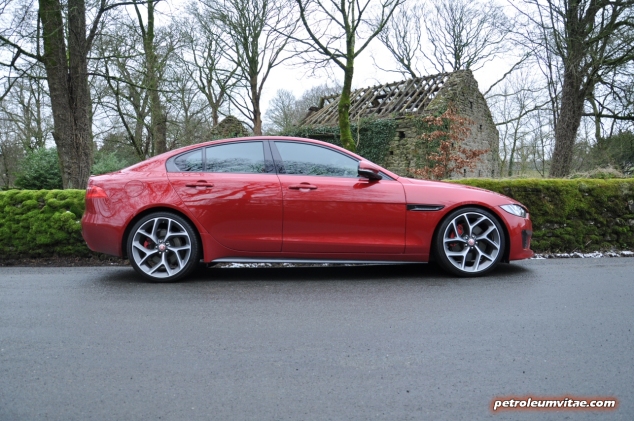 The rear-wheel drive XE S is in its element when the going gets twisty, tail-wagging part of its DNA. The chassis is unswervingly composed and the steering nicely weighted for everything from slow-speed manoeuvring to high-speed chucking, the driver kept involved through decent feedback. The XE S really is a driver’s car. Refined and smooth in urban areas, the adaptive dampers deal with ubiquitous potholes, speed bumps and surface imperfections surprisingly well, even on 20-inch rims, which are nicely protected by the tyres.

Freezing January temperatures and a quarter of the mileage having been covered in miserable stop-start commuter traffic saw the 250 miles I covered during my week with the 194g/km XE S translate into 24mpg compared to 34.9mpg on paper. High 20s or low 30s may be achievable on frequent long runs, the Jaguar certainly not quite as fuel efficient and green as its primary rivals. Commencing at a whisker under £45,000, the XE S as tested weighed in at £55,163, reflecting the array of expensive options fitted, meaning it’s also the priciest of the bunch.

Jaguar’s XE S isn’t the most spacious of warm performance saloons, its cabin is hit and miss but at least possesses the soul lacking in the more clinical Germans, and its pricing may deter some buyers. Sir William Lyons would be proud, though, as the XE S definitely feels alive and brings a welcome dose of British charm, elegance and pedigree to the mix, complete with more than ample performance and remarkable agility.