You may not have twigged, but Suzuki sold a fairly forgettable car in the UK under the Baleno moniker in the mid-nineties to the early noughties. It may seem a trifle odd to learn that the all-new model is yet another smallish car from Suzuki, sitting above the Celerio but effectively shoulder to shoulder with the Swift in the range. The job of the brilliant Swift will remain to lure the yoof out there away from equally exciting rival supermini rivals like the Fiesta, Ibiza and Mazda2, whilst the all-new Baleno is tasked with reeling in uncle Graham and aunty Deirdre, who might ordinarily toy with the idea of a more mature supermini, such as a Hyundai i20 or SKODA Fabia. 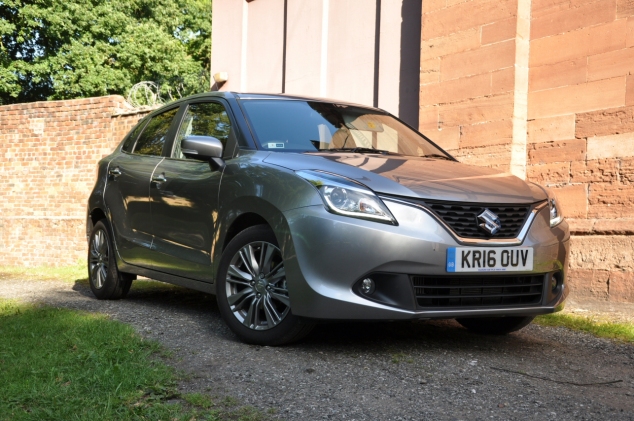 Neither droolworthy nor fugly, the new Baleno is first and foremost a blender and will go down just fine in its target market. Although the rear is pretty uninspiring, the side profile and front contain sprinkles of sportiness and anyone after slightly more visual pizazz can order one in a bright shade of red or blue. The standard 16” alloys look pretty decent, the front and rear lights are a good effort and the flashes of chrome and rear privacy glass cap it off nicely.

Unless you’re proportioned like a beanpole or a beach ball there should be ample head, shoulder and legroom inside the new Baleno, both front and rear, although the headrests in the back dig into one’s shoulders. The firmness of the front seats inadvertently increases the car’s sporty feel and they do a good enough job of long journeys. The 320 litres of luggage space provided by the Baleno betters the Fiesta’s 290 litres and only falls slightly short of the Hyundai i20’s capacity. The hidden compartment incorporated into the Suzuki’s boot is a useful feature for people who ferry any bling around with them and means there’s hardly any boot lip to negotiate loads over.

In SZ5 specification as tested, the Baleno is certainly not short of standard equipment, from DAB digital radio, Bluetooth, electrically adjustable and heated wing mirrors, keyless entry and start, to an LCD instrument screen and even sat nav, which is one of the best systems I’ve used, making finding the nearest petrol station, burger joint or car park a doddle. The car’s main infotainment touchscreen is intuitive to operate but is positioned marginally too far away for drivers with short arms, attracts fingerprints in seconds and the voice activation system struggled to understand any commands given to it. Okay, the new Baleno is no Audi A1 or VW Polo in terms of ultimate refinement and finish, but with electric rear windows, HID headlights and automatic climate control part of the generous package, plus radar brake support available as an option, it’s simply got to make thinking people think.

Suzuki has the habit of producing cars that handle relatively decently and although it can’t match the Swift for engagement and agility, the all-new Baleno is far from mundane, largely thanks to the 1-litre, 3-cylinder petrol Boosterjet engine, which is a corker. It’s an excellent car for town driving as Suzuki’s NVH (noise, vibration and harshness) efforts are evident, combining with the smooth engine to create an overall driving experience that is so refined and hushed when idling and in low gears that you could probably hear a field mouse break wind. Give the Baleno Boosterjet the beans and the 111PS/170Nm unit bursts into life with a throaty tone that sounds quite naughty at times. Taking 11.4 seconds to reach 62mph, which curiously is 0.4 seconds slower than the automatic version, the manual SZ5 isn’t a pocket rocket but its paltry weight of just 980kg means it’s more fun to drive than many people may perceive.

The notch-less 5-speed manual gearbox is a joy to use and allows swift progress, no pun intended, with tightly-spaced gear ratios that encourage zealous driving. The downside of lacking that now commonplace sixth gear is that refinement on the motorway could be better, with wind, road and engine noise apparent, the car’s light weight resulting in it bobbling around in crosswinds. Understeer inevitably kicks in eventually but the Baleno is surprisingly willing to be hurled around corners at a fair lick, the front and rear disc brakes are neither spongey nor grabby and do a good job of stopping the car, and the clutch is nicely weighted. 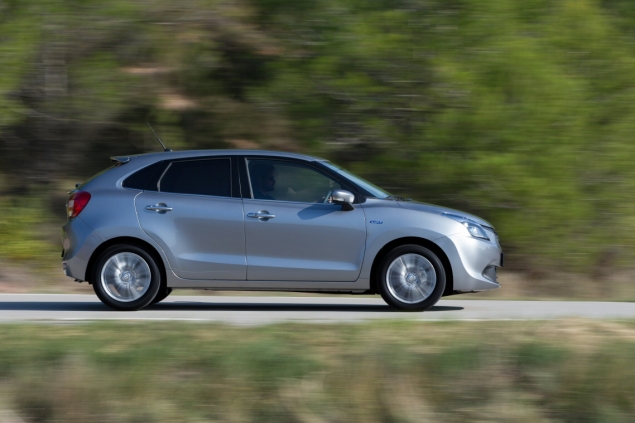 Anonymous styling actually appeals to some buyers and not only is the new Suzuki Baleno a steal at just £13,999 for this fully-specified SZ5 but it’s also pretty economical, easily snapping at the heels of 60mpg, and the Boosterjet engine really is a highlight, making it a great car for folk after something slightly different and marginally larger than the Swift.