The world is full of ‘just because’ stuff, from motorised ice cream cones and heated butter knives to electronic gadgets for drying one’s lugholes, and smart belts that tighten or loosen automatically depending on how much one’s eaten. Then there’s the Audi RS Q3 performance, the introduction of which intimates that the standard RS Q3, arguably a trifle needless in its own right, isn’t quite powerful enough for the droves – sorry, handful – of people that simply have to have one. Miffed at the thought of Audi’s blisteringly fast compact SUV on stilts remaining one of an absurd kind, Mercedes got in on the act with the GLA 45 AMG, followed by Porsche with the Macan S. With the arms race well and truly on, Audi has pulled its dumpy-but-cute baby crossover’s socks up, and the unusual recipe actually works rather well. 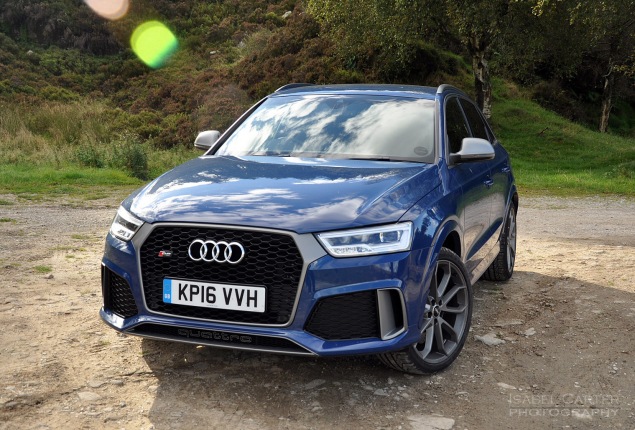 Blasting down snaking country lanes in something like the RS3 hatchback is face-warping fun, but there’s something about being jacked up and able to see over hedges, allowing anyone jammy enough to be able to afford to buy or lease a RS Q3 performance, whether experienced or amateur, to eke more and more out of each bend and straight.

Ramblers and other outdoorsy types often struggle to restrain the distain they hold for SUVs, especially performance models with drinking problems, but the RS Q3 performance is met with genuine enthralment. Perhaps Ascari Blue is the reason. It’s a stunning colour, unique to the performance model. Equally unique 20-inch matt titanium alloys, red RS-branded brake callipers, Quattro lettering on the front air inlet duct and various other visual enhancements also set it apart from the ‘standard’ model beautifully, without even a hint of cheese. 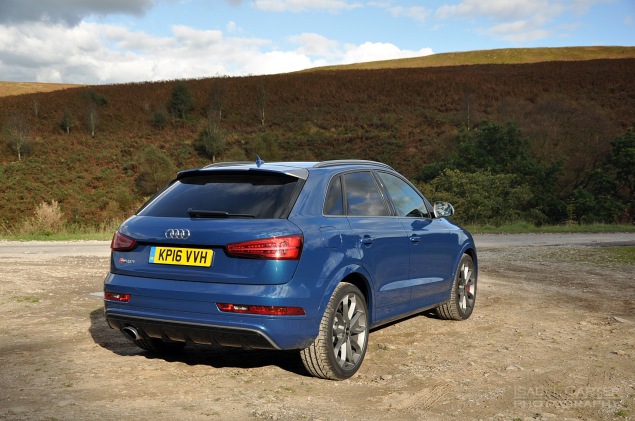 The RS Q3 performance’s interior follows Audi’s usual ethos of understatement and is constructed exquisitely in general terms, although compared to its larger Ingolstadt siblings like the RS6 and R8, a higher proportion of harder-feeling plastics can be found after only a modest amount of exploration. The infotainment screen pops up at the touch of a button, but folding it back down into the top of the dashboard is a manual affair. The awkwardly-positioned climate control dials are unusually crude for a car of this price and it’s a shame Audi’s marvellous Virtual Cockpit screens and clever MMI Touch systems haven’t found their way into the RS Q3 performance. It is after all, though, built on the older PQ35 platform rather than on MQB, which forms the basis for the new RS3 et al.

Anyone upgrading to the RS Q3 performance from a French or British hot hatch or from a mass-market SUV will no doubt be besotted by the hugging Alcantara and leather sports seats with honeycomb stitching in blue, a colour which also tastefully lends itself to the carbon twill trim inlays, flat-bottomed steering wheel and floor mats. It’s a superbly comfortable car, whether bobbing up and down seemingly mountainous speed-bumps on the school run or powering round gravel-strewn rural bends. The elevated driving position, remarkable levels of tranquillity afforded by Audi’s sound-deadening efforts, and a fantastic BOSE Surround sound system seal its effortless nature for everyday urban use.

The Audi’s 356-litre boot, which is around 80 litres smaller than a GLA 45 AMG’s, is somewhat hampered by the car’s sloping roofline and feels a little too high up for the loading of bulkier items. Front space in the RS Q3 performance is ample, though, and kids should be fine with the back seats.

A tweaked fuel pump and increased cooling capacity mean Audi’s revered 2.5-litre, 5-cylinder TFSI engine pumps out upto 367PS and 465Nm torque in the performance model, helping anyone whose school run incorporates suitably long stretches to reach 62mph in 4.4 seconds, shaving 0.4 of a second off the ‘normal’ RS Q3’s time. The top speed of 167mph is somewhat academic but there’s no question over the sheer pace of Audi’s barmy compact SUV, its elevated driving position heightening the sensation nicely.

The engine is remarkably refined when cruising in Comfort or Auto mode and inevitably feels like a leashed animal when the drive select system is first set to Dynamic and the gear selector switched to ‘S’. Booting the accelerator pedal soon unleashes the ferocious beast and the horizon is reached more than satisfactorily swiftly, accompanied by a few crackles and burps from the single oval exhaust. Granted, it’s more melodic than the majority of lesser cars, but could be perceived as a touch too quiet compared to the switchable active exhaust in some Jaguars, for instance. Playing with the flappy paddles does get the RS Q3 performance singing a few more naughty notes but the most guaranteed approach is to flog the thing over a reasonably sustained period, which seems to make it come alive and cotton on to the concept that some extra fire and brimstone would be welcome. Its slightly shy nature, along with the smooth, linear delivery of the quick-shifting 7-speed S tronic gearbox means the Audi needs to be driven hard to get the best out of it, which may not be everyone’s cup of tea but certainly proves rewarding. The gearbox and engine really are excellently matched.

Sitting 20mm closer to the ground than the standard Q3, the performance model’s RS sport suspension acquits itself respectably in tight bends, although the car unsurprisingly still leans more than its RS3 sibling, for example, due to its SUV proportions. This relatively increased tendency to roll a bit in corners actually contributes to the fun and engagement derived from driving the RS Q3 performance, which is perfectly suited to a slow-in, fast-out ethos, traction palpably kept in check by permanent Quattro four-wheel drive. The steering is pretty lifeless as per other current cars from Audi’s RS stable, and the extra weighting in dynamic mode feels artificial, positioning this potent crossover as one that primarily excels in cross-country point-and-shoot antics, complete with kids and dogs on board, and a great view over the hedgerows.

It won’t come as a surprise that the RS Q3 performance isn’t exactly petrol-sipping in terms of economy, averaging mid-20s on the whole whilst emitting 203g/km CO2 and currently costing a fiver short of £300 in road tax. It’s not cheap, either, albeit in a highly niche segment. £52,375 as tested might seem a touch steep compared to its rivals and indeed some smaller lukewarm estates. The Audi, though, with its impressive straight line performance, reassuring levels of grip, sophisticated if bizarrely aging interior and moderate practicality is a hidden gem for anyone who simply must have a feisty, supercar-embarrassing compact SUV ‘just because’.