When some friends recently came over for dinner, little did they know that the sirloin steaks, Irish cream tipple, plum crumble tart and red wine that they couldn’t get enough of came from the discounter supermarket with a name one letter different to that of one of German’s luxury car marques. While brand snobs will still exist hundreds of years in the future when we human beans will probably have moved on from driverless cars and be able to teleport, the ones who can look beyond a badge will continue to derive grin-inducing satisfaction. 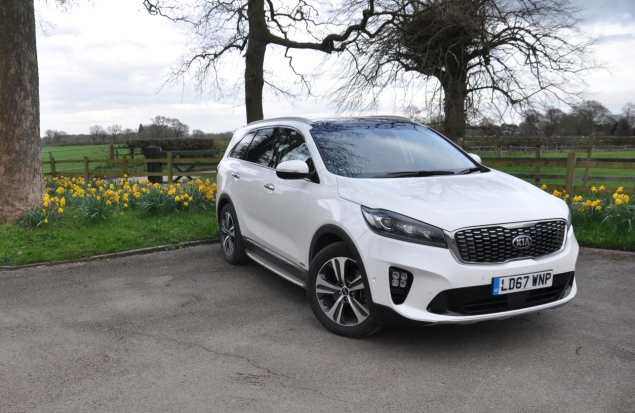 Cue the freshly-titivated version of Kia’s Sorento SUV in new GT-Line S guise. For anyone deliberating buying or leasing a 7-seat whopper for parental taxi duties, furniture store trips or towing, it certainly ticks all the boxes in visual terms. The Sorento’s front end has always been less cartoony than its smaller Sportage sibling, with a much more imposing yet elegant presence, and the new GT-Line S variant introduced to the facelifted third-generation lineup ups the ante nicely. Its face is now more swept-back with sleek wraparound LED headlights, quad icecube daytime lights, a silver skid plate and various other subtle tweaks. Granted, its design is far from radical and particularly distinct, but conversely it doesn’t look like a frog that has had an unfortunate accident with a bicycle pump.

The Sorento has a quietly muscular overall profile akin to Anthony Joshua in a pinstripe suit, although the rear is somewhat pedestrian to behold. This is true for many of its rivals from differing price bands, though, and at least the Korean biggie’s bootie isn’t all droopy with the number plate inelegantly forced to one side like a certain other 4×4. While the Sorento isn’t British, German or Swedish, and doesn’t offer superfluous gimmicks like animated indicator lights and fancy puddle lights, it’s a very handsome 7-seater SUV indeed.

Kia’s recently established Global Quality Centre’s mission to ‘drive defects to zero’ is evident inside the Sorento, particularly in GT-Line S trim. Its attractive price point understandably means that the abundance of leather isn’t made from the hide of an animal found only on a remote island in the Pacific, but Tesla now pedals synthetic leather for its Model X and even Mercedes promotes man-made ‘Artico’ leather nowadays. The Kia’s seats are supremely comfortable and in the front come with 10-way adjustment plus memory for two drivers. The centre console and general cabin layout aren’t driver-focussed but this works in the car’s favour, enhancing its airy and spacious aura along with the full-length panoramic sunroof.

The driving position is excellent and backed by ergonomically logical and pleasantly tactile controls, and the dashboard fascia attractively combines a combination of different shapes and surfaces, from piano black trim inserts and soft-touch plastic to brightwork in a satin finish. Groping around the cabin’s lower reaches unsurprisingly reveals some hard plastics, but by and large the quality of the switchgear and materials inside the Sorento has improved so tangibly that the disparity between it and aspirational German rivals has narrowed significantly. Scraping the barrel to find gripes, the aesthetic relationship between the infotainment system and climate control display looks inharmonious and the latter’s red backlight makes it look dated like something from the nineties, and even in ‘max’ mode the fans operate with little vigour. Still, even if the Sorento hasn’t been given the same treatment as the Rio and Stinger, Kia’s decision to incorporate traditional controls rather than farm climate duties off to the touchscreen like so many rivals have done is to be praised.

Features like wireless smartphone charging and harman/kardon premium sound systems were once the domain of luxury brands’ models but now proudly feature in the new GT-Line S Sorento. With a specification list the length of which would give Erasmus Darwin’s two-volume Zoonomia works a run for its money, further highlights include a 360-degree Around View Monitor and surround cameras plus the Smart Park Assist System taking any apprehension out of parking manoeuvres, digital instrumentation, a smart powered boot that opens just by standing next to it, Android Auto and Apple CarPlay compatibility and auto high beam headlights. Except for a tiny minority who would deem ambient mood-lighting, integrated connected services and TV/DVD functionality as deal-breakers, this 7-seat SUV has all the toys and its cabin excels at comfort and spaciousness.

When it comes to practicality, the second-row seats can recline, and shoulder, head and legroom are all excellent, while adults of average size will find the two rearmost seats adequate for shorter journeys, complete with their own climate settings, storage cubby and cupholders. Boot space matters to 7-seat SUV drivers and the Sorento falls short of the similarly priced SKODA Kodiaq when all seven seats are in use as the Czech still somehow manages to provide an Audi A1-equalling 270 litres compared to the Korean’s disappointing 142 litres. The Nissan X-Trail fares even less favourably with 135 litres, though. However, flip the two rear chairs then remove the parcel shelf from its practical storage home under the boot floor and the Sorento is brilliant in 5-seat mode, with 605 litres on offer that looks, feels and proves every bit as useful in daily life as it sounds.

For context, the comparable Kodiaq provides 720 litres, the considerably pricier Q7 accommodates 770 litres and the even cheaper Ssangyong Rexton swallows an amazing 820 litres in 5-seat mode, but the Kia still trounces the X-Trail’s dismal 445 litres. With all rear seats flattened, the Sorento’s 1,662 litres feels van-emulating in practice and although the boot floor is a long way up, it’s free of any nasty lip to negotiate.

There are no acronyms and numbers to wade through when pondering whether to buy or lease a Kia Sorento, as only one engine is available – and it’s a very likeable one. The 2.2-litre CRDi diesel unit is tried and tested and shifts this large 7-seater SUV along nicely with 441Nm torque available from low down in the rev’ range at just 1,750rpm. While it unarguably emits a gruff clatter under hard acceleration, it settles down in a quiet, refined matter when cruising.

Cars like this aren’t about pace but for what it’s worth, the Sorento in GT-Line S guise hauls itself to 60mph in 9.1 seconds and doesn’t feel particularly slow, especially when placed in the Sport setting via the drive mode button. The predictable result is a sharpening of the throttle response, a shortening of the gear ratios and a tightening of the steering setup. Very few people will use the fitted paddle-shifts and hardly any will likewise attack snaking and deserted country roads like they might in a Range Rover Sport, but the Kia performs surprisingly rewardingly considering its attributes, intent and price point. 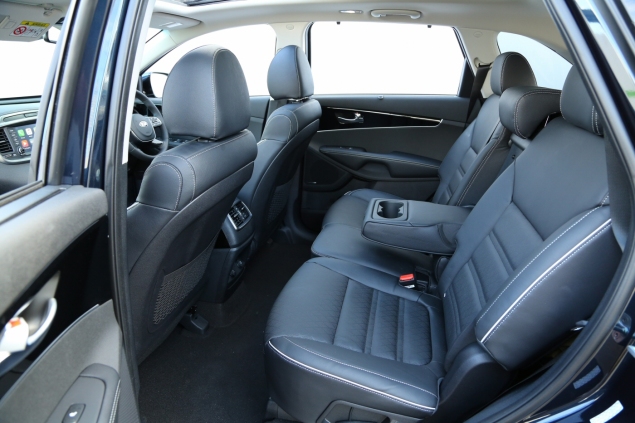 In fact, its ability to be pitched through mud-filled craters and over jagged lumps at pace without the car or one’s derriere feeling compromised is quite remarkable, the Sorento proving enjoyable to hustle along twisty B-roads and farm tracks without a care in the world. The reworked suspension setup certainly helps proceedings and although the rack-mounted Motor Driven Power Steering system could never be hoped to deliver dollops of feel, feedback and responsiveness, it’s far from a damp squib.

A few hundred miles of mixed driving will see most drivers achieve average fuel consumption in the high-30s or low-40s, which is pretty good for an SUV with ark-like proportions like the Sorento and doesn’t fall far short of its 43.5mpg figure on paper. There is surprisingly little wind noise, but driving over loose ground curiously results in stones bouncing around the wheel arches in a way not dissimilar to the balls inside a National Lottery machine, the noise transferred into the cabin along with the sound of any water that happens to get sloshed around by the tyres. The new eight-speed automatic gearbox fitted as standard to GT-Line S variants shifts seamlessly and performs excellently. The stop/start system is too officious and the drivetrain can sometimes prove laggy, though, making tricky road junctions even more daunting until a bond has been formed between driver and car.

All-wheel drive (AWD) from Dynamax is standard across the latest Sorento lineup to prove Kia’s loyalty to its traditional caravan-towing and adventurous fanbase, and despite the majority of drivers being unlikely to venture too far off the beaten track, it’s reassuring to know that although 100% of torque is usually fed to the front wheels to save fuel, the system can redistribute it intelligently up to a 60:40 split for road use, while there’s even a lock button that splits power 50:50 front and rear at speeds of up to 25mph. People out there who tow will be interested in the Sorento’s towing capability of 2,000kg when mated to the eight-speed automatic gearbox, compared to certain variants of the Kodiaq that can tow up to 2,300kg, and the most powerful X-Trail 4WD XTRONIC CVT that can manage a maximum 1,650kg.

With quietly stylish aesthetics complete with a decent peppering of sporty touches, a cavernous and extremely well-specified interior that will satiate all but the fussiest of folk, an affable and quite efficient engine, genuine off-road ability and surprisingly pleasing dynamics, there’s a heck of a lot to like about the fettled third-generation Kia Sorento. Packaging will always be overly important to some people out there but just like the discerning shoppers who feast like kings on the award-winning food and drink purveyed by discounter supermarkets, anyone buying or leasing a Sorento can feel equally smug.