Our test model was the V8 Ford Mustang in Convertible guise. Just walking around its exterior, it looks so much meatier than the model it replaces. The new bonnet vents and redesigned front bumper, along with that new front splitter make it look even meaner than it did previously – and that’s saying something! That said, though, Ford hasn’t gone overboard like manufacturers often do, much like when your hairdresser gets scissor happy. Ford has been very clever in its tweaks and new LED headlamps and rear lights compliment the subtle changes wonderfully. 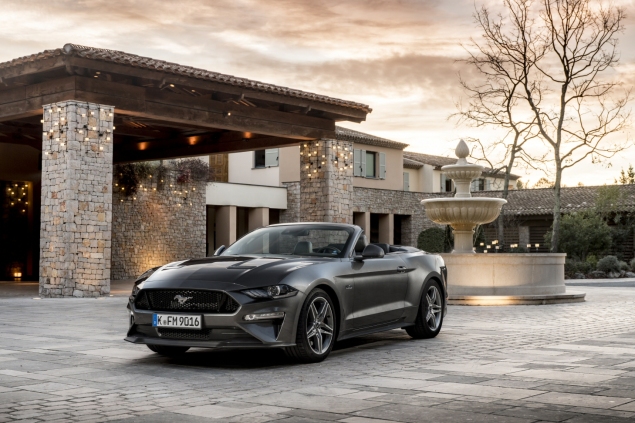 Getting inside, there’s not much to report. Yes there are a few new materials and sleeker digital displays, but that’s really about it. The new digital instrument pack changes from two round dial display to a more futuristic rev counter, depending on whether you’re in Normal or Sport mode. You can also match the colour combination to your outfit should you wish, as there are hundreds of combinations to choose from. Space up front, along with storage, is good, but space in the back is a little cramped. The materials used throughout are a huge improvement on the outgoing model. There’s still the odd bit of cheap plastic used but not on obvious display, though it still doesn’t compete with German rivals in the interior stakes. 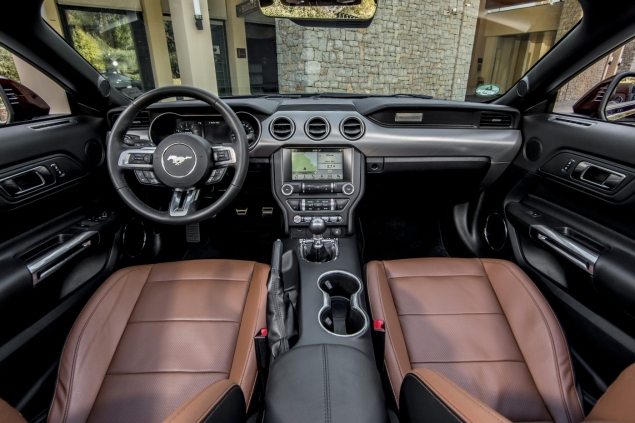 Most significant in the updates list is the addition of a new ten-speed automatic gearbox, along with a revised fuelling system mixing both port and direct injection, resulting in an increase of 38bhp and thus giving the revised 5.0-litre V8 a total output of 444bhp.

Having set my driving position in some of the comfiest seats I’ve ever sat in (I genuinely didn’t want to go back to my own BMW M240i seats) I pressed the brake and pushed the start button. Well, good morning to you, too! And to all my neighbours in my street and the next. That awesome growl will bring a smile to your face even if you’ve not had your morning coffee! Don’t fancy risking upsetting the neighbours? Then that’s covered, too. Ford has implemented a programmable ‘quiet’ mode for such an occasion. The V8 unit is mated to a new ten-speed automatic gearbox, which tackles changes in speed like a champ. It might not be the smoothest in the current market, but it’s still impressive. It’s a big car and it’s heavy up front; something which is ever apparent on our European roads, but new MagneRide dampers (available as an option) which read and adjust 1,000 times a second based on road conditions have been employed to help counter its top-heavy characteristics. Steering is weighty but lightens up at speed and feels enough to cope with the sheer weight and size of this car. The handbrake in our test model did feel a little slack, however. Automatic high beams were a godsend through the country lanes of Hertfordshire, seemingly reacting quicker than I would have done myself. There’s also a new driver mode called ‘Drag Strip’ which uses launch control together with the new MagneRide dampers to bring the car lower with added grip.

In terms of running costs, be prepared to get to know your local fuel station attendant well. Official figures claim just shy of 25mpg, but in real world conditions you’ll be lucky to hit 20mpg. However, and it’s a big however, you’ll have fun getting there. You won’t ever tire of that noise and it’s a bit of a show stopper on the road. I’d like to think it was me all the heads were turning for when trundling through the centre of Cambridge, roof down and V8 growling, but alas, it was this beast of a motor. A feeling that no generous mpg figures would sway. As for reliability, the V8 unit is, despite featuring some heavy updates now and over the years, fundamentally the same simple engine that goes back a lifetime. 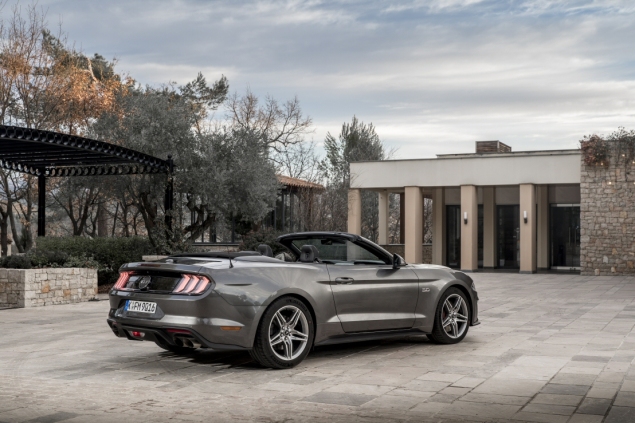 New safety features include Pre-Collision Assist which scans the road ahead for moving objects and pedestrians, warning you and if you fail to react it will start braking to help you slow down. Distance Alert is also included, which displays the distance to the vehicle in front, alerting you if you get too close. Lane-Keeping System has been installed to warn you should you drift out of a lane on a multi-lane road. And Driver Alert is there to monitor driving behaviour, alerting you should it detect driver fatigue.

The model itself starts at £37,045, but our test model, the Ford Mustang GT Convertible 5.0-litre V8 complete with 10-speed automatic gearbox, is priced at £47,245 OTR. Add the paint, MagneRide Adaptive Suspension System (£1600) and Custom Pack 4 with audio system, satnav, climate controlled seats, ebony partial leather wrapped centre console and 19-inch Forged alloy wheels in silver, and the price bumps up to a little more than £52k!

The Ford Mustang is also available in Fastback guise with a 286bhp 2.3-litre EcoBoost engine and claimed fuel economy of 31mpg. On paper, the newest EcoBoost is around 20bhp less than the pre-facelift model. Ford assures, however, that previous performance figures still stand.