Welcome to the Jumble

The Auto Jumble. Populated by plenty of extreme facial hair, blackened finger nails from years of oily exploration and endless piles of what, to the untrained eye, looks like scrap. They appear all over the country, arguably the most famous is the extravaganza at Beaulieu, but the one nearest to home for me is one of the biggest regular auto jumbles in Europe.

Normous Newark (sic) is held every couple of months or so at the Newark Showground, very close to the A1/A46 junction. I’ve been a patron of the event since a cold winter morning back in 1998, during my final year at uni. Needing a break from completing job application forms and studying, I braved the conditions and with frost bitten body extremities, queued for half an hour to be allowed in. I’d only decided to go as I was beginning to become more dedicated as a brochure collector and ad in the local paper mentioned car-related literature was for sale. In fact, entering the indoor hall where the brochures were being sold, indeed my bookshelf runneth over. I left that day, a young apprentice in the manly world of brochure collecting, feeling really pleased with myself that I’d bought 12 brochures for the princely sum of £30. Now I’d be looking at getting over 100 for that amount, but you live and learn.

For the first few years, I’d be at every event, building up my library and making friends with the traders, many of whom I’ve kept in touch with since. The advent of eBay and the ease in which people could sell all sorts of attic clutter cast a shadow over my reason for visiting the jumble. That first time I visited, there were seven indoor stalls selling brochures – today there was one, but I’ve been before and not seen any. I experienced the reasons why first hand years ago when I hired a stall: I sold £50 worth of brochures in the day and double that selling the same amount of stock on eBay. Without all the hassle of lugging stuff around, setting up and getting bored in between customers. As a result, my visits became less frequent, wintery and wet days were ignored and I fell out of love with jumbling.

A couple of years ago, the warm sun beating down, no Formula 1 or British Touring Cars on the telly to distract me, I gave in to temptation and in response to one of the organiser’s emails, set off. Other than my entry fee, I took no money with me. My reasoning was that if I didn’t have it burning a hole in my pocket I wouldn’t be looking for automobilia to buy and therefore disappointment wouldn’t sink in if I didn’t find anything. The result was I really enjoyed the few hours I spent there, milling around, soaking up the atmosphere and enthusing over the eclectic mix of motors on display. Today was such a day.

Pounding the asphalted roadways and dusty tracks across the fields you bump into all sorts of people from different walks of life. It truly breaks class divides and agism because everyone there is an enthusiast in one way or another, enjoying the camaraderie of mixing with like-minded folk. Everyone apart from those partners and kids who’ve been dragged along for a ‘family day out’ and look bored to tears whenever you pass them. It’s very clichéd but there really is something for all kinds of enthusiasts.

I’m not into bikes but, for those who are, the place is full of parts, partially completed bikes and fully finished, ready to roll machines. I remain convinced it must be possible to go to any jumble at Newark buying all the bits in the morning to build a bike from scratch ready to ride home in the evening. The biking community garners respect too: guys (and girls) who can wear full leathers in the 20+°C temperatures for hours on end are a special breed. The ones who wear boiler suits too are something else again. In fact, it struck me how well I fitted in with these burly, tattooed blokes, being one too. 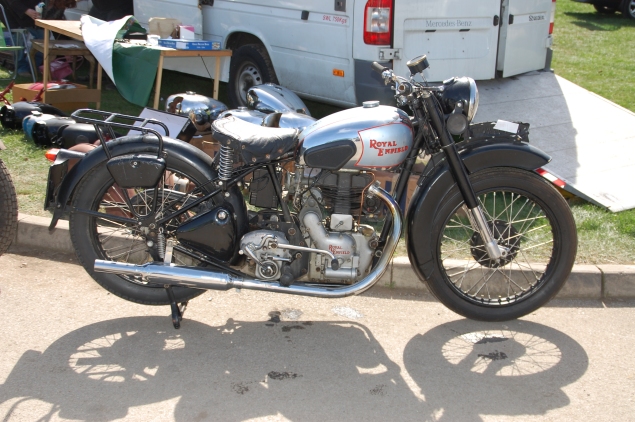 But it’s the car-related stuff that’s more my thing. You see so many odd things that you can’t begin to imagine how much of the stuff actually sells – one guy today had a pile of assorted plastic window winder handles, for instance. That must be a lifetime’s worth of stock. There’s so much stuff for sale it must be easy to miss something that you really needed. I wasn’t looking for one but found a clutch plate for a Maxi 1750 – would a guy with such an automotive delight, who needed to cure his slipping clutch, have even seen it. Again, the searchability of eBay runs rings around a jumble but there’s no atmosphere sat in your lounge looking for hard to find parts.

Amongst the random front wings, oil filters and number plates while you wait stalls, you begin to appreciate that differing selling skills of the vendors. Some clearly have an idea about ‘facing out’ stock whilst others look like they’ve simply pushed out the contents of their vans and left it on the grass. The experienced guys have purpose built trestle tables, organised in boxes, labelled clearly and with a photographic knowledge of their stock lists. Others opt to lay out their wares on the ground like as though they were grave goods dug up on Time Team with Tony Robinson stood alongside witnessing all before him.

For die-hard die-cast fans and automotive literature lovers there was a decent selection today. While brochure sales have fallen through the floor there were books and Haynes manuals to fill a mobile library. Not that there was a mobile library for sale. However, I did see a 1980s ambulance being used as a makeshift motor home, still with a day-glo stripe but minus blue lights. More casually than Casualty. 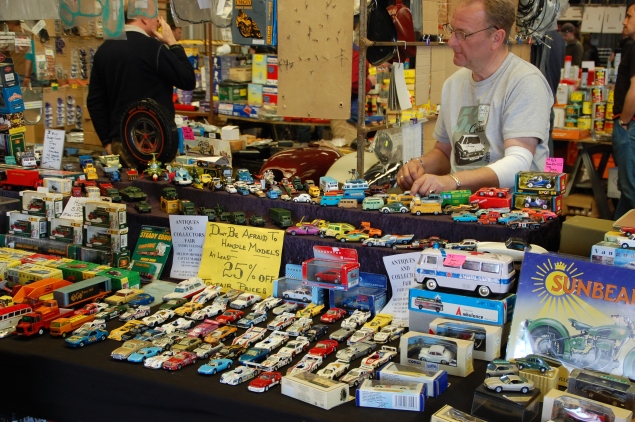 I can only assume they must sell in sufficient quantities to make it worth the vendors’ whiles but I’ve never understood why people would buy industrial sized boxes of washing powder, toilet rolls by the gross and garden gnomes from such an event. Why would you be looking for bits for an old car or bike and suddenly feel compelled to purchase your weight in toilet tissue? 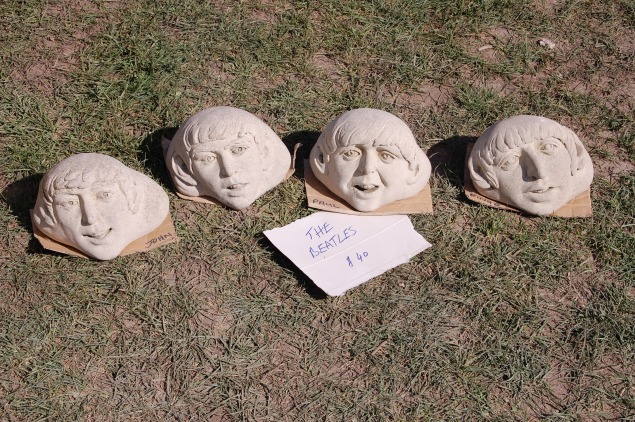 Back to reality then, there are of course lots of cars. Don’t consider coming to Newark if you’re expecting the East Midlands’ answer to the Concours d’Elegance – some of the exhibits are very, well, honest. Or rough and ready depending on how you like your adjectives flavoured. As April is quite early in the year show so there weren’t quite as many niceties as there are in the summer shows, but warm temperatures and no threat of rain brought out a few interesting machines, in various states of repair, a selection of which are shared below. The owners are generally delighted, if camera shy, to have their pride and joys captured digitally for posterity and what becomes more evident with each visit is the relative modernity of some of the cars on show compared to when I first visited. Look no further than the G-reg Escort XR3i cabriolet – at one time it was impossible to drive past a gym without seeing one of these outside.

The next Normous Newark event is on 8 May 2011 – maybe see you (and a few thousand others) there?