The Exeo is something of a curio in SEAT’s line-up. Mention its name to many, including those who know a thing or two about cars, and you’re often greeted with a blank expression. Yet the car itself looks immediately familiar.

How so? Well, if you’ve not spotted by now you need to do some cramming before your next car-spotting exam. The Exeo appears to be little more than a topped and tailed previous generation Audi A4.

The Spanish brand doesn’t hide the fact that the two-year old range of saloons and estates is Audi-based, but claims that 70% of it has been altered or modified during the SEATisation process. Let’s be frank – it remains a fine, if conservative-looking model, but it looks little more than the A4 with a contemporary SEAT grille and lights affixed to its extremities. Oh, and the rear view mirrors now sprout from the shoulders of the doors rather than the leading edge of the front side windows. Heady stuff.

Inside it looks Audi-like too, although the regular saloon dashboard has been replaced by the classier looking moulding from the defunct A4 Cabriolet, recognisable with its trio of circular air vents.

The fact is, SEAT needed a middle market segment car. Its second generation Toledo developed a loyal following but was half a class too small to compete with the Mondeos of the world. What ground it could have gained was thrown away with the replacement Toledo, which became a tall Renault Vel Satis-like hatchback-cum-MPV. Buyers stayed away in droves.

While this segment is shrinking, it nevertheless remains profitable – something SEAT intends to capitalise upon. Already the Exeo is the marque’s third best-selling model line in the UK as it laps up fleet sales from rivals. Despite the basic age of the design being over a decade old, it remains classically good-looking and well-proportioned, additionally offering a wealth of equipment for not a significant outlay. As companies make cutbacks and tell their user choosers “no options”, a car loaded with extras suddenly becomes an even more attractive proposition. 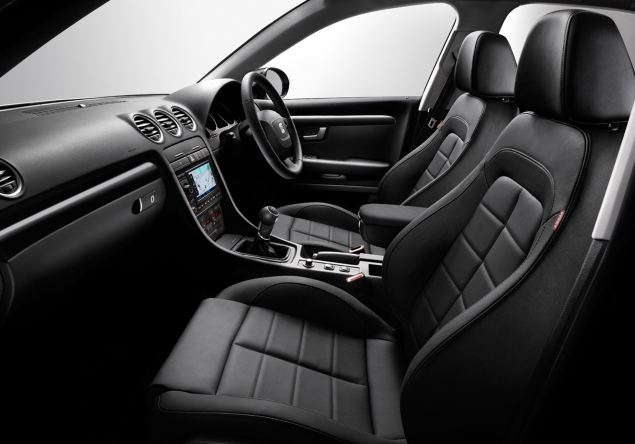 Inside, Exeo drivers will find a tactile and robust interior with quality mouldings that have been precisely assembled. Little has been changed from the Audi dashboard save for revised graphics on the instruments and the current SEAT design of steering wheel.

Front seat occupants will discover their chairs are comfortable and supportive, offering a range of adjustment that makes the most of the space available. Due to no significant change in the car’s size or structure, the rear seats remain essentially as before, with legroom being mediocre.

This Sport Tech model on test offered a superb range of equipment to add to the ownership experience. Boxes are pre-ticked for black leather upholstery, 6.5” colour screen for the DVD-based satnav system, a Bose premium sound system, Bluetooth connectivity, dual zone climate control, parking sensors and automatic lights and wipers, to highlight a selection of what’s on offer.

The Exeo’s tall trailing edge of the boot line ensures a cavernous loadspace of 460l too, making it a practical family/business use car without relying on a hatchback rear end.

On the road, the harshness of the previous A4 has been all but eliminated with a thorough revision of the suspension set up, making the Exeo ride with greater compliancy over Britain’s rutted roads, without losing anything significant in terms of handling.

Although it steers and changes direction with a degree of sportiness, it would be a disingenuous to call it a sports saloon. What it offers for the majority of drivers is the ability to press on along back roads with a mild degree of entertainment, but still remain sedate and comfortable for those long motorway slogs.

The 2-litre version of Volkswagen Group’s venerable TDI powerplant is now smoother, more powerful and more economical since it was fitted with common rail technology and provides the Exeo with a fine turn of speed, useful overtaking ability and silky progress – especially when mated to the Multitronic gearbox.

Although it has six electronic ratios that can be selected sequentially, continuing the pseudo-sporty theme, it works most effectively when left in ‘D’. Here, the continuously variable transaxle coordinates itself well with the flat torque delivery from the diesel motor, ensuring fast progress is not accompanied by gearbox whine or excessive revs.

Tail lights aside, the Exeo's Audi heritage is most obvious from this angle

It’s easy to see why the Exeo has become a popular choice but ultimately it’s a car that can’t quite match the sophistication or space of newer rivals. Generous equipment and a competitive list price help justify its purchase though. What it has provided SEAT with is an effective stop-gap and a car upon which to create brand loyalty, as well as generate healthy profits. Let’s hope the next Exeo is an all-new model and not something reheated from Ingolstadt.

On Sunday 2 October, SEAT invited a small group of predominantly online motoring writers to experience a selection of its models, using the Aviator Hotel in Farnborough as its base. The #SEATtweetUP was the first such event of its kind organised by a major manufacturer.