The fourth generation of SEAT’s popular Ibiza small car range went on sale in the summer of 2008, initially only as the 5-door hatchback body style on test here. Still sharing its platform with the Fabia and Polo as part of the Volkswagen Group’s small car range, the styling of the newest Ibiza was now graced with maturity and dynamism.

Looks are always subjective but I can’t claim to be a fan of the design of the 5-door Ibiza overall. The nose is pert and attractive, with a variety of straight lines forming a V-shaped theme at the front. These flow rearwards into a series of intersecting creases along the body sides but the rear portion, after of the back doors, seems heavy and ungainly. It mimics the triangular cues of the larger Leon and contributes to a large boot – but it loses the youthful vibrancy that SEAT capitalises upon in its branding.

Equally, the interior is disappointing too. The dash is simple and stark, with a swathe of dimpled plastic sweeping across from the passenger side. This panel has a little ‘give’ in it for fans of soft-touch plastics but the rest is a cacophony of harder, thinner materials, cladding the doors and other mouldings. It’s well assembled and rattle free, it simply feels downmarket.

Despite its austerity, it’s nevertheless a spacious cabin, with comfortable front seats, and plenty of space for heads, arms and legs. Rear occupants don’t get a raw deal either, although like the majority of small cars, the back bench is best suited to occupants in child restraints. Because of that generous rear overhang, the boot provides a useful 292l of space, extending to 554l with the rear seat folded. 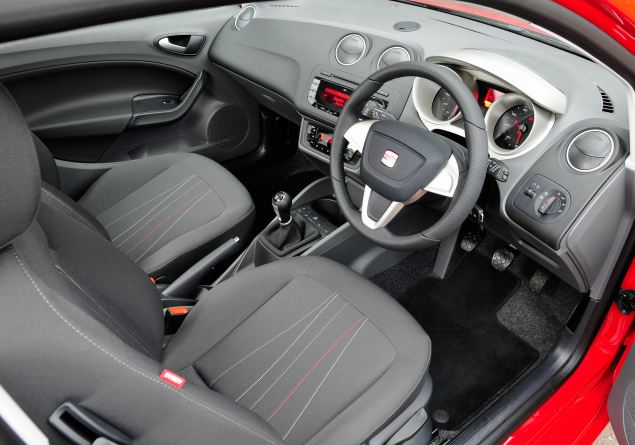 On the road, the Ibiza TDI Ecomotive sends mixed messages, none of which communicate an engaging overall experience. The ride quality is fine, although its short wheelbase causes that typical small car bounce over a series of undulations. At cruising speeds it feels assured and composed.

The steering turns in with initial accuracy but safe, predictable understeer is soon on the scene when cornering with vigour, promoted by the slender low rolling resistance tyres on this eco special.

Saying that, you have to be going some to drive it with vigour. Despite there being an alleged 74bhp being delivered by that common rail TDI triple, it feels slower than the quoted 13.9 second dash to 60mph suggests. The impression is one of being a little gutless and lacking in torque. Certainly, if you intend powering out of a side junction you find the car you jinked out in front of is soon looking large in your rear view mirrors.

Once up to speed, it’s a perfectly acceptable engine though, offering a buzzy thrum from its three cylinders and now with common rail technology, much of that agricultural clatter associated with VW Group TDI units is gone.

The trade off for the pedestrian performance is brilliant fuel economy, aided by a variety of aerodynamic tweaks and constant refinement of the mechanical package. A claimed average fuel consumption figure of 80.7mpg seems achievable, with the trip computer regularly flickering in the mid-70s during my brief run.

Like many eco cars, the Ibiza features a stop/start function to further reduce its diesel sipping credentials, but it didn’t seem as keen on engaging as rival systems. When it did work, it was a painless operation, gently firing the engine back up as the clutch was depressed to select first gear.

The 5-speed manual gearbox itself was a surprisingly delightful instrument, snicking quickly and precisely between cogs in a sporting manner that was at odds with the character of this particular Ibiza, if not SEAT’s overall image. 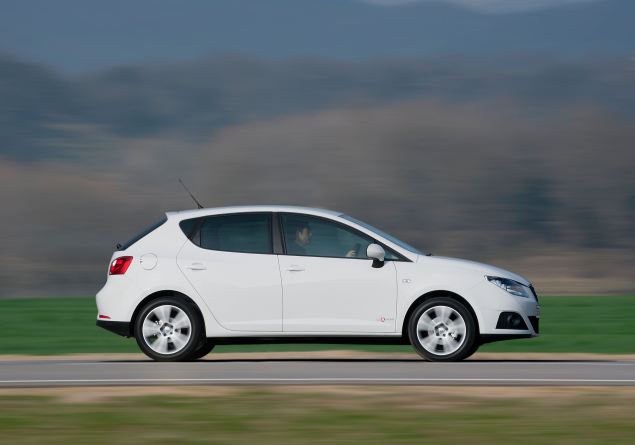 That specification and the fine fuel economy will make it an attractive buy, but the Ibiza SE Copa TDI Ecomotive is a car your current account will fall in love with, rather than your heart.

On Sunday 2 October, SEAT invited a small group of predominantly online motoring writers to experience a selection of its models, using the Aviator Hotel in Farnborough as its base. The #SEATtweetUP was the first such event of its kind organised by a major manufacturer.