Flick through any glossy magazine and between those luxuriant covers are pages upon pages of photographs of people and products in glamorous locations. CAR Magazine is no exception – not only is it a leading publication for beautifully crafted stories, those words are complemented by powerful images.

You can therefore imagine my excitement back on Monday morning when Tim (Pollard) suggested that by the end of the week I’d be able to join Ben Pulman and a couple of other guys on a sporty hatchback comparison test photo shoot.

Where would we be going in order to have an appropriate backdrop for the pictures for the story? Somewhere chic like the centre of Paris? Silverstone maybe, to highlight the sporting intent of these cars? Err, no. Instead, the chosen location was the epicentre of glamour that is central Birmingham.

I’ll be honest though, I felt very privileged to be allowed to go along and to have the opportunity to perform some of the driving requirements, so I really wouldn’t have minded where we went. Even shooting around Lincoln (one of the locations briefly under discussion) would have been brilliant. But Birmingham it was, and a rendezvous at a central location at 8am was confirmed.

Ben had checked my driving the evening before in the Scirocco to reassure himself that I was able to drive appropriately and not hoon around bends and squeal the tyres. Driving for a photo shoot, I was to discover, was about precision and following instructions immediately.

Paranoid I’d be late, or that something might delay my journey, I set off in the small Volkswagen coupé very early, arriving at the multi-storey car park just after 7am. It’d been a wet and dingy drive down from Lincoln and although I don’t know (or didn’t know then) central Birmingham very well at all, the base location was easy enough to find. 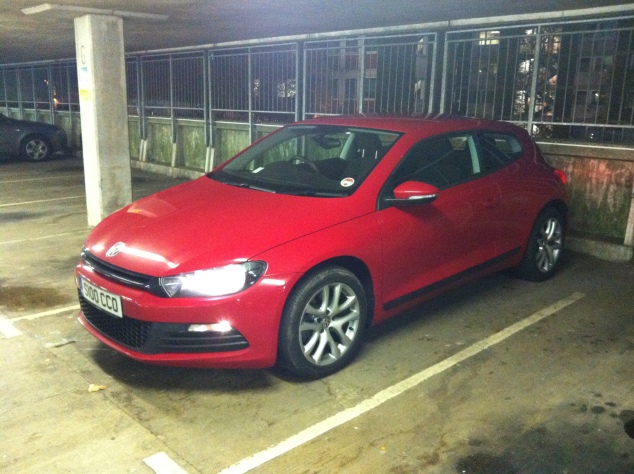 In fact, in my regular job as a teacher, I’d been down most of the same road only a month ago taking a group of students to Cadbury World. Unsurprisingly, that journey was somewhat less satisfying in the LDV Convoy minibus I was piloting.

I parked up the Scirocco TSI near the entrance so I could see when the others arrived as, aside from where to meet, the details were rather scant. Half an hour later, Ben rocked up in the Alfa Romeo Giulietta I’d seen in the Bauer car park during the week, scooting straight up to the roof level, so I duly followed. Once we’d got the morning greetings out of the way, I went to use the facilities while Ben had a power nap. 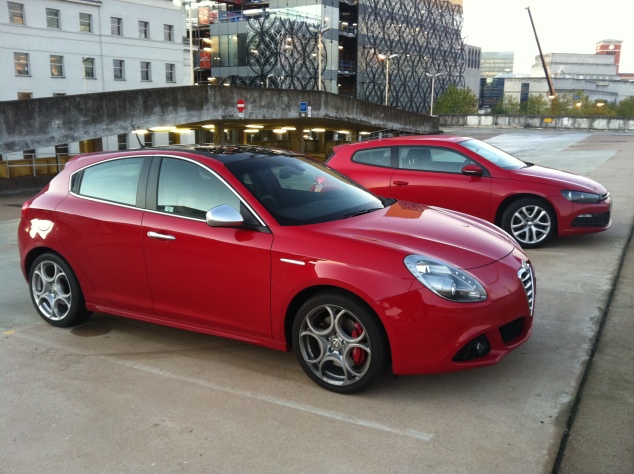 Giulietta and Scirocco now up top. Ben (Pulman) enjoys a kip in the Alfa

Shortly after returning from powdering my nose, Ben Barry, CAR’s deputy editor arrived in his hatchback. CAR has secured an exclusive drive in the new sporty Ford Focus Zetec-S – this was to be its first outing against its main rivals.

Although Ben (Barry) had been in the office most of the week, today was my first chance to really have a proper chat to him about life as a writer, and he was as illuminating as all the others I spoke to were. Everyone has been forthcoming with advice, suggestions and their own experiences – as well as being encouraging and positive about my efforts.

Next up wasn’t the final car of the test, but photographer Greg Pajo. If you’ve read CAR for a while you’ll be familiar with Greg’s work, but whether his images are new to you or not, take some time to look at the samples on his website – to say his work is amazing does not do it justice.

Again, another great, easy to talk to guy and disarmingly chilled too, considering the tight windows of opportunity he’d have to shoot in what became an increasingly busy city centre. One of the rewards of Greg’s talent is that he gets to jet off all around the world shooting cars, people and well, anything else he’s paid to do.

He carries with him a vast array of expensive kit and equipment too – the investment’s certainly worth it for the results he achieves.

Finally, Chris Chilton arrived in the fourth car – a custardy yellow Vauxhall Astra GTC, or the new 3-door Astra in old money. Chris has been a CAR contributor for years but a couple of months ago switched to go freelance, so it was interesting to talk and hear how the work and lifestyle differs.

So, all four cars present, Greg was ready to get snapping all the static shots. This is where the standing about in the cold for hours on end that had been mentioned to me the day before started. Although we did have a break in order to go and wash the cars as each was covered in a grimy layer of filth.

One possible static shot is worked on - later discarded

The other guys were talking about how tedious the waiting around could be, but as I performed the post-jetwash chamoising down of the Scirocco, it struck me that someone else’s tedium is always more interesting than your own. At least while we were getting cold and damp, Greg was able to get on photographing the interiors and some of the details of each car. 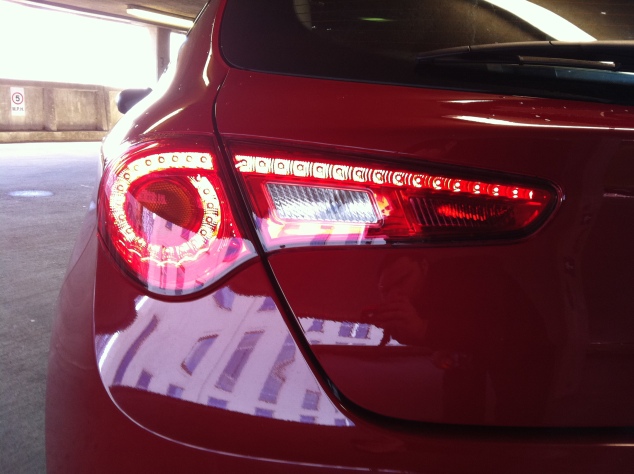 It was just after lunchtime when the first rig shot was set up and I was about to take part in my first rolling photo shoot. Greg readied his equipment in the Volkswagen as we laid out the position of the cars in the multi-storey for a dry, static run.

I’d assumed before the event that each of us would stick to a particular car all day, but the reality was that we each drove all four. I therefore made my photo shoot debut in the Focus. The plan was to run in a diamond formation with the camera car at the front, and the Astra and Alfa in front of me. Ben (Barry) made my job very clear: to stick close to the rears of the two in front, straddle the central line whenever I could to prevent people from overtaking and interrupting the shot and, most importantly, ensure I could see the camera at all times.

The Focus Zetec-S comes fitted with a snow plough. Just awaiting a deluge of the white stuff...

Just before we set off I began to wonder about how closely I’d be able to follow the two in front. After all, what if they braked or turned off suddenly? Immediately, the penny dropped – I didn’t need to be worried about them, after all, these guys drive significantly more powerful and faster machinery with great regularity. Driving well is an integral part of their jobs and their collective skill behind the wheel would easily outshine the majority of us on the road. No, if anything they were wondering about me! They’ve done this for years whereas I was a photo shoot virgin. What if I managed to screw things up and Greg couldn’t get the shots he needed?

In reality, that first run all worked really well. It certainly didn’t feel pressured but you have to be incredibly alert, constantly monitoring your speed, the distance to the cars you’re being shot with, your mirrors, Greg beckoning you closer or pointing to suggest changing position, people randomly trying to get in on the mix and gently easing them away or ushering them through. And of course, making sure you can see the camera.

Giulietta and GTC have a rest between loops of Birmingham

Although the first few hours of the day had been the slowest of my whole work placement week, the second half of the day went very quickly. It was all relatively quick-paced, if necessarily repetitive, doing constant loops around different parts of Birmingham centre, trying to find breaks in the constantly busying flow of traffic. Swapping cars on almost each run definitely helped break the monotony as well as providing an instant comparison between each of the four cars. I know the order I’d rank them so I’ll be interested to read how my thoughts compare when the test’s published in CAR’s next issue.

The final closing shot saw the four protagonists lined up for a dusky evening shot down a cobbled side street in an old industrial area of Birmingham. The impending darkness signalled not only the end of the day on my first shoot, but also my placement at CAR.

As I drove the Alfa back to Tim’s (he’d taken my Yeti, which I needed to get back), I began to mull over my week. I’ve got a lot to be thankful for – everyone at CAR gave me so much time, were always willing and able to answer questions and offer advice. Vitally, I was given a genuine opportunity to show them what I could do, with proper writing jobs that needed doing. And I was able to leave knowing that writers at the top of their game felt I had the ability to cut it in the industry too. The whole week was so much more than I dared hope it might be.

Thanks too, to all of you who’ve followed my diary this week. I hope it’s been of interest and maybe made a few of you who are also considering a career as a motoring writer to seek out work placement opportunities too. And if you’re only catching up now and want to see all the pieces I’ve produced for CAR’s website, then look no further than here.