Chances are that if you’re in the market for a mid-sized family hatchback, the Peugeot 308 may well have escaped your attention. But should it have done? After all, there’s a fond following for the old 205 and 306 hatchbacks. So, does the 308 have the same appeal as its forebears? 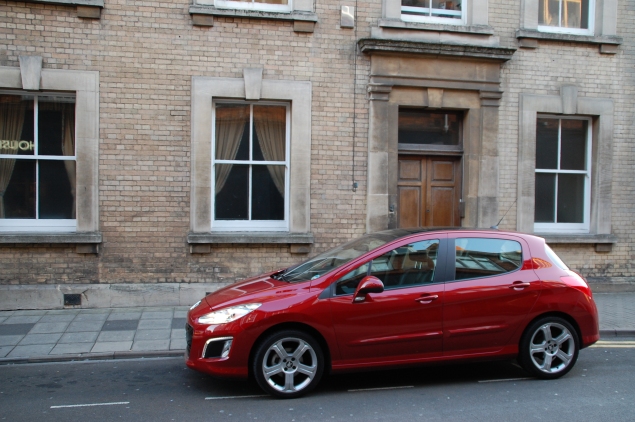 Peugeot's facelifted for 2011 308 hatchback - this is the Allure specification

The 308 was launched back in 2007, as a direct replacement for the similarly-sized 307. Hatchback versions arrived first, with SW estates and CC coupé-cabriolets arriving in subsequent years. Earlier this year, the whole range was facelifted with a new, more elegant nose design and minor tweakings to bumpers and trims.

The reprofiled nose is now blessed with more elegance

In theory, replacing the generally unloved 307 shouldn’t have posed Peugeot too much of a problem. Its previous 306 had a loyal customer base who’d grown up on a diet of 205s and needed something larger to progress into. It also successfully attracted new customers to the French marque, with its combination of prettiness and excellent driving characteristics. But the later 307 was blandly styled and gave up ground to its rivals in the driving dynamics stakes. Combined with concerns about reliability, the 307’s image took a bit of a hit and it failed to capture buyers’ imaginations like the 306 did.

With the 308, rather than attempt to recapture the 306’s glory, Peugeot instead chose to pursue a path of making a better 307. It still has its immediate predecessor’s more upright, MPVesque styling, but this time around there is greater visual stimulus inside as well as out. In order to allay reliabilty concerns, the 308 uses higher quality plastics and is built to a higher standard.

Those subtly altered looks are neither shockingly modern nor achingly beautiful. The 308 doesn’t visually offend but neither is it the first in line to attract either. It may appeal to Peugeot die-hards but its unlikely to generate much additional footfall in dealerships.

The recent styling refresh reduced the visual mass of the nose, smoothing out the central bonnet hump and reshaping the headlights. The grille aperture was also reprofiled, not only becoming squarer in shape but also losing the protruding black plastic ‘brace’. A pair of inverted L-shaped LED day running lights add a touch of glitz without going over the top.

Few viewing angles suit the 308 either with the windows of the cabin suggesting the top half of the design has slipped forwards down the sharply raked bonnet line. The rear end looks heavy-handed, but at least provides the Peugeot with a decently-sized boot.

Rear styling of the 308 looks heavy

Perhaps the greatest area of visual interest is on the lower edge of the window-line, which rises on the rear doors with a soft curve towards the roofline. Interestingly, once inside the 308, you immediately realise the line of the top of the door cards is on a completely different plane – they’re higher than the line of the glass on the front doors, but lower on the rear, meaning that soft curve on the door is visible through the glass. Rather than finish it of with a suitably shaped piece of interior trim, the back of the metalwork is covered in the same black, rubbery foam that edges a normal window opening. It might just about look acceptable when new, but for 308s that will spend most of their times outdoors when parked, it looks like prime real estate for moss to grow on.

The 308 hatchback line-up comprises of Access, Active and Allure trims, accompanied by an economy-minded Oxygo specification and more sporting SR and GT lines.  The engine line up is spread across a field of 1.4- and 1.6-litre non-turbo and 1.6-litre turbo petrols as well as two HDi units, of 1.6- and 2.0-litre capacities. Depending on the model mix, a choice of manual 5- and 6-speed, automatic 4-speed and 6-speed automated manual gearboxes are on offer.

Buyers progressing from a 307 will find the 308’s interior a significant step forward both in quality and design. There’s greater visual interest with the trio of circular air vents, pale grey dials and the dimpled finish to the soft-touch moulding that forms much of the dashboard. Again, it’s not a cutting edge, modernist design, but it complements the sober yet solid exterior well. 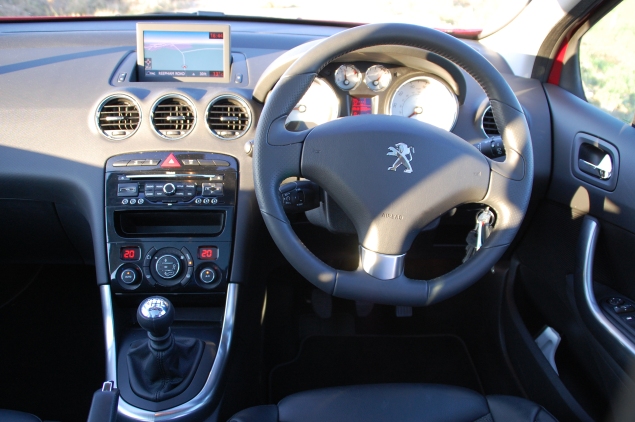 Well built but conservative dashboard of the 308

It all feels very substantial too, with no apparent squeaks or rattles. It doesn’t exactly set new standards for build quality in the mid-size hatchback segment, but at least the Peugeot feels on par, rather than being a poor relation. 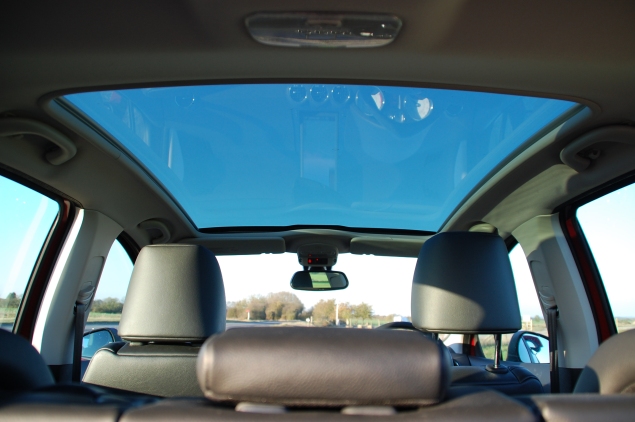 Despite the Allure trim level, the cabin, is not especially, well, alluring. It’s all a bit dour, although the glazed roof is a welcome relief in the pursuit of airiness. Seats are trimmed in a combination of hardwearing ribbed grey fabric for the centre panels with charcoal leather on the bolsters.

The front cabin - with those high seat bolsters

Those bolsters are curious though. Maybe it was just the awkward way I clambered into the driver’s seat and settled behind the wheel, but the bolster on the right hand side of the seat base almost always folded over and ended up under my right thigh. Can’t say I’ve experienced that in any other car and I wonder how good the hide on that chunky cushion would look after a year of that happening twice a day.

That said, when you’re in properly, the seats hold you comfortably and support well around your thighs and all the way up your back too. All the switches and buttons are within easy reach and it’s a relaxing place in which to travel. The centre front armrest could do with being a few inches higher though. 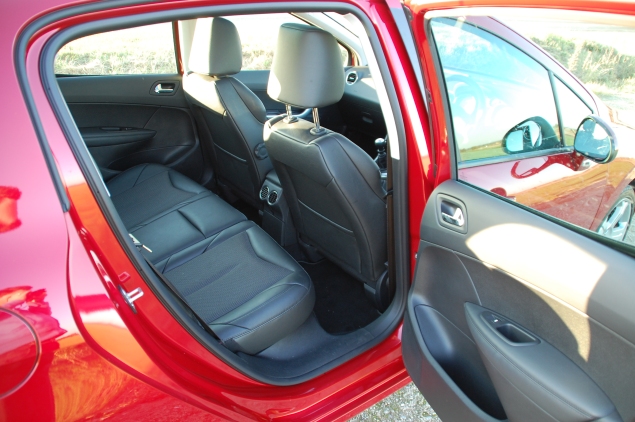 Rear seat legroom is at a premium

Rear seat passengers fare less well if they’re of adult proportions though. It’s wide enough, just, for three to sit side by side but knee room’s not particularly generous. Sat behind my own seating position my knees where firmly entrenched in the seat back. As per industry standard these days, there are all-round airbags, ISOFIX child seat mountings in the outboard two rear places and overall a 5-star Euro NCAP safety rating.

A positive side effect of that compromised rear legroom is the generous 348l boot space, which can be extended even further by tumbling the rear bench forwards.

What can buyers of the 308 in Allure specification expect on the goodies list? My test car came with dual-zone climate control, the glazed roof with an electric blind, cruise control, automatic lights and wipers, rear parking sensors and Bluetooth connectivity. This model was also fitted with a pop-up colour screen satnav system and, with the 1.6-litre diesel unit, the e-HDi function – Peugeotspeak for a stop-start system.

As good to drive as Peugeots of old?

Despite being closely-related to the RCZ tested recently, the 308 didn’t feel anywhere near as engaging for enthusiastic meanderings on country roads. Whether it was a combination of the 112bhp engine which worked much better when driven gently (to the greater good of improved fuel economy, naturally) and the gearbox and pedals which felt anaesthetised and slightly vague, you quickly became accumstomed to taking your time and relaxing in the Peugeot.

Getting going from a standstill felt as pedestrian as the 12.5 second trundle to 60mph suggests, but once forward motion was established, the 308 made acceptable progress through the gears once the maximum torque kicked in from a lowly 1750rpm.

The e-HDi engine - not a special edition for Yorkshire

Peugeot’s e-HDi system was also the keenest to be employed of the systems I’ve so far sampled too. Normally these stop-start functions kick in when the car’s stationary, but I quickly discovered that knocking the gear lever into neutral as I coasted to a set of traffic lights riding the brake pedal turned off the engine before I reached a standstill. The pale blue ‘eco’ dash light and a handy timer showing how long the engine had been off during each journey gave the game away. So what you lose in performance and vigour, you make up for in economy and comfort. The quoted combined cycle figure of 62.8mpg does not seem to have been plucked from a volume of motoring fairytales, either.

The smaller of the two HDi engines Peugeot offers in the 308 is refined and quiet, both on start up and at speed. Again, every experience with the car gently ushers you into smooth, considered driving in which the comfort and very compliant ride are showcased.

If you do venture onto your favourite B-road to give it some beans, the subdued feeling through steering wheel is immediately apparent and the inherent understeering nature of the chassis shines through when pushed.

While the 308 doesn’t fire up the imagination in the manner of its predecessors, it does represent a significant step up from the 307.

Quality, refinement and comfort are its major strengths, which combined with the fine fuel economy, make it a fine car in which to travel long distances.

But the mid-sized hatchback market is the most competitive in the whole industry, with many great alternatives to choose from. The 308 isn’t a bad car by any stretch but, unless you’re immediately sold on the looks, spend some time contemplating the wealth of competition out there.