Roger Moore has long been a favourite of mine. The actor, not the instruction, I mean. It’s almost entirely down to that adage about your favourite James Bond actor being the one who was current when you became familiar with that particular film genre. The cheesy one liners, flared man-made fabric suits and a bouffant of hair seemingly made of cast iron are woefully dated now, yet remain endearingly charming and reminiscent of that period of history.

For many, Roger Moore’s globetrotting, do-gooding, regime-overthrowing predecessor, Simon Templar was closer to the definitive article. The overactive eyebrows were already present (each with their own Equity card, presumably) but The Saint was a bit rough around the edges – hardcore, in a 1960s TV show kind of way. And the car that this debonair epitome of sophistication drove? Volvo’s P1800 coupé.

With memories of staid hatchbacks, tank-like saloons and commodious estates, Volvo’s coupé offerings were always incongruous with their peers in the line-up. But exist they did: the P1800 progressed into the glass-backed 1800ES; the rear end styling being mimicked in the late 1980s but the avant garde 480.

That same glazed hatch made a welcome reappearance in late 2006 when the C30 debuted at the Paris motor show, Volvo exploring a smaller niche in the market than it had ventured into for some time.

I thought ‘C’ model Volvos were coupés and convertibles – this is a hatchback, no? 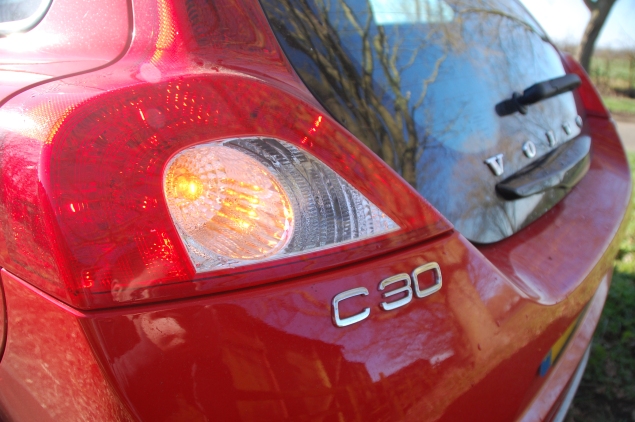 Long roof coupés tend to fall between stools of also resembling hatchbacks or even small estates. In profile the roofline is more rakish than the old 480 and generally most had no problem accepting that as a sporty coupé.

With its narrowing side glasshouse as the lines stretch rearwards, leading to a glassy tailgate set deeply into a vault-like tail, elements of Volvo’s stylistic virtues of solidity and robustness are clearly evident. But gone are the days where the Swedish marque’s offerings look like they’d been commissioned by the Ministry of Defence.

The C30’s nose was refreshed at the end of 2009 aimed at producing greater differentiation from the related S40 saloon and V50 estate ranges. Whilst it’s distinctive, it looks a little over-styled and a shade droopy as though the styling buck had been left rather too close to a hot radiator overnight. 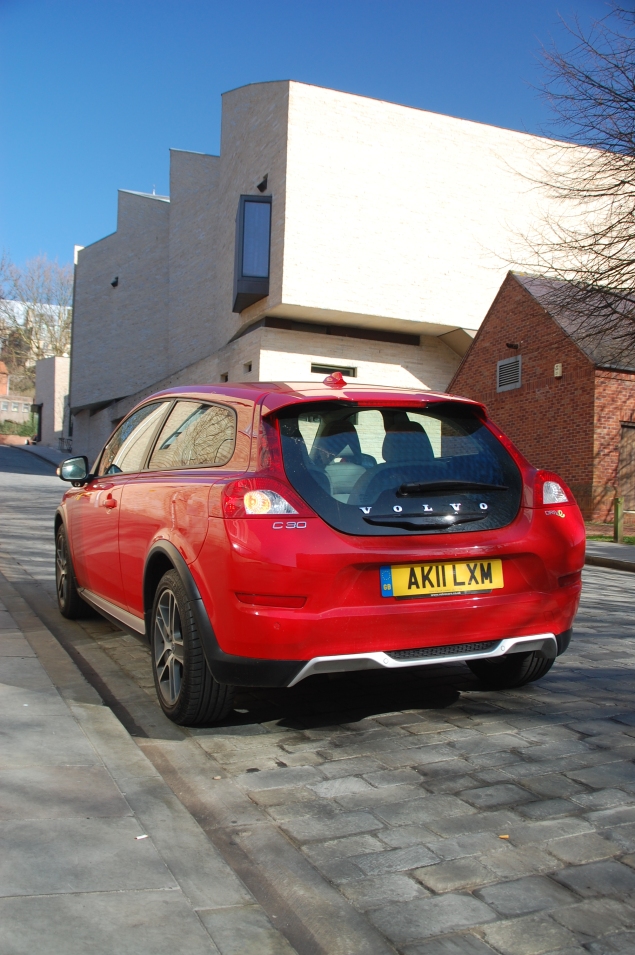 Strong shoulders, distinctive tail lights and a vault-like rear hatch ensure the C30 is not mistaken for other cars

Nevertheless it still doesn’t look out of place on the C30 and has the effect of elongating the nose and further accentuating the strong and curvaceous shoulder line that broadens towards the back of the car. Viewed from the above, the cabin tapers at the rear, leaving haunches over the rear wheels suggesting they, rather than the fronts, are the ones that are driven.

Volvo switched to front wheel drive two decades ago. What’s special about this one?

The C30 is the fruit of Volvo’s labour from when it was part of the Ford empire, thus it rides on a modified version of the platform that underpins the Mk II Focus and its derivatives, providing a sound starting point for a well-honed chassis.

Refreshingly, Volvo has steered away from temptation to bestow the C30 with an overly firm, jarring ride that many Teutonic rivals seem fascinated with, subsequently allowing it to feel genuinely different as a driving experience.

Perhaps at odds with the C30’s silhouette, this SE Lux specification model feels taut and crisp but the chassis settings are dialled in for controlled comfort rather than sporty prowess. The ride quality ensures the Volvo never loses composure when you choose to press on yet remains supple enough to iron out the majority of undulations and ruts whether at urban speeds, cruising on multi-carriageway roads or wending around countryside rat runs. Control comes to the fore in that the C30 doesn’t wallow or roll through bends, ensuring driver and passengers remain relaxed and unruffled. 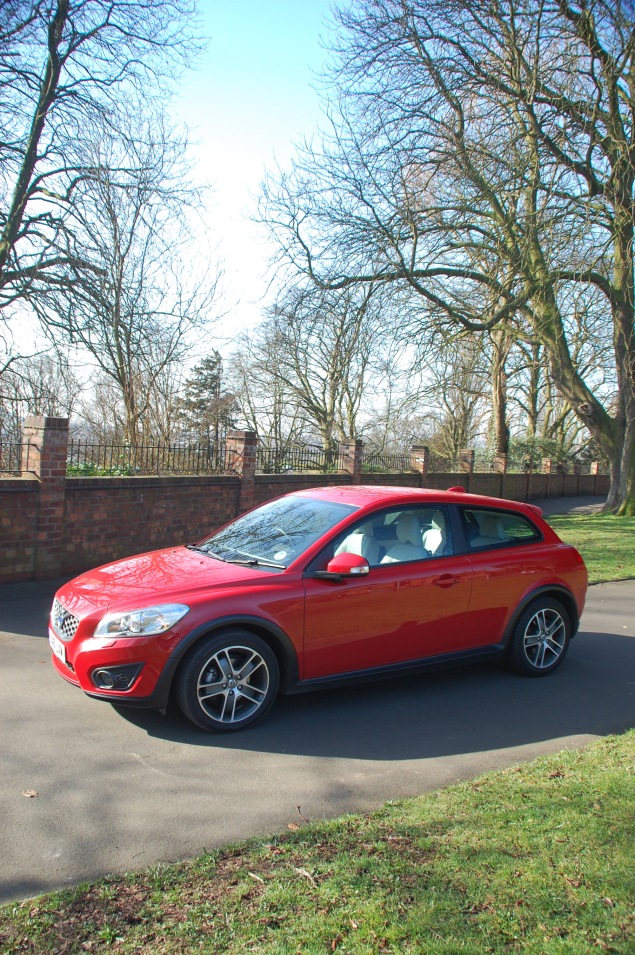 Front wheel drive cars will always have the ultimate edge of steering excellence sullied by transmitting the engine’s power to the road, but despite 199lb/ft of torque being delivered through them the Volvo’s steering remains crisp on turn in and remains so until speeds become much higher, before gently nudging into understeer territory. It’s therefore disappointing that there’s not a tremendous amount of feel through the wheel itself to communicate all that the front wheels want to tell the driver.

The steering, although power-assisted, isn’t overly light, which compensates somewhat in that as you turn you’re able to feel some of the input through the mechanism. That slightly anaesthetised nature provides a benefit in that there’s virtually no kick back through the wheel, once again reinforcing the relaxed, solid nature of the Volvo. The wheel itself, despite being clad in smooth, grippy leather, feels huge for a contemporary car, as though shared with one of the marque’s trucks.

Volvo’s efficient DRIVe diesel models, with extra fuel economy eeked out by virtue of the stop-and-go wizardry, are deservedly popular. Despite the 1.6-litre common rail turbocharged unit delivering a modest-sounding 113bhp, it’s torquey in a linear manner providing plenty of flexibility for both overtaking with ease, as well as delivering impressive frugality. Volvo’s official claim of 74.3mpg on the combined cycle might be a quirk of the European fuel consumption tests, but according to the C30’s on-board computer it never dipped below 50mpg during my week with it, despite being driven with considerable vigour.

On cold start-ups the agricultural diesel clatter of yesteryear is noticeable but soon dies down as the engine warms and propels the C30 along with a pace that feels faster than a 0-60 time of 10.7 seconds suggests. Refined and punchy is the overall sensation you’re left with.

Other engines in the C30 range include the same motor as in this DRIVe but minus the stop-start function badged as D2, whereas the more powerful 148bhp D3 models feature a 2.0-litre, five-cylinder version of the engine. Petrolphiles have a choice of a naturally aspirated 2.0-litre, four-cylinder with 143bhp and topping the range is the legendary T5 model: 227bhp from a turbocharged, straight-five 2.5-litre engine capable of pushing the small Volvo to just shy of 150mph. All models are manual gearboxed with D3 and T5 models also available as automatics.

Coupés tend to be a bit impractical though. Is the C30 spacious?

The front half of the C30’s cabin feels light and airy with plenty of room for my 6ft frame in all directions, the chairs themselves offering a wide range of manual adjustment; combined with the steering wheel which can have a varied angle of reach and rake optimum comfort is ensured. Volvo seats are renowned for their close-to-perfection nature of support and comfort and these are no different. Long journeys in the C30 prove to be a relaxed and fatigue-free experience. 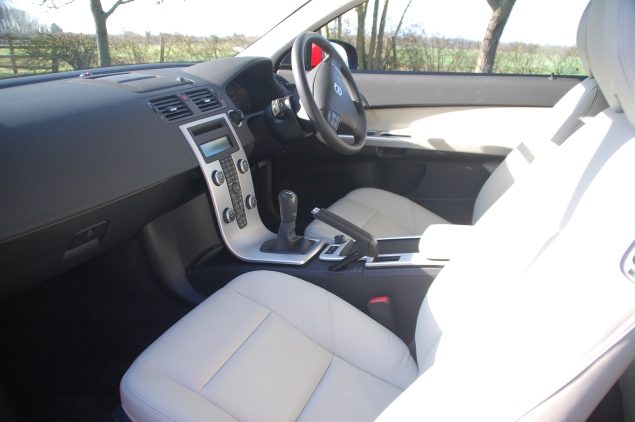 Swedish design minimalism is the watchword with the dashboard itself, the upper half of which is formed of a thick, soft-touch plastic, complemented by a floating centre console with a metallic finish and the multifunction dials and display for the switchgear. Those rotary controls perform the majority of the tasks with that central bank of minor switches initially appearing bewildering but soon feeling like second nature. Each button has a little lip moulded into the plastic to give your fingertips greater purchase whilst on the move, with a satisfying level of damping on each press.

The only real bugbears with the interior are the lack of a left foot rest and the positioning of the cupholders immediately behind the gear lever. As with the S60 recently tested, if you employ the beverage slots your arm will be fouled or held at an awkward as you swap cogs.

Slot your fingers through the loop to ease the front seats forward, which they do in a tip and slide motion and you’re greeted with a pair of individual rear chairs which almost match the front ones for comfort and spaciousness. The slope of the roof doesn’t impinge particularly and room for legs and arms is also generous. Like the old Volvo 480, the centre armrest reveals a narrow slot through to the boot when lowered, permitting longer loads to be accommodated. Be clear though, there’s no five-seat option available on that back seat.

Spacious pair of chairs for the C30's rear passengers

Pop the glassy tailgate open and again the coupé-nature of the C30 can be used to spare the Volvo’s blushes in terms of outright practicality. The boot lip is high and the opening itself is ovoid in shape but once in, the boot is reasonable for a coup-atch at 251l. Both rear seats tumble individually to increase loadspace. Frustratingly, a hard tonneau cover for the boot is an extra cost option at £55. Okay, it’s not going to break the bank but it should be standard instead of the less practical soft one, again, hinting at a similar feature on the old 480. Personally I preferred to not use the soft version and left the boot exposed, which was great for rearward visibility but less so for the security of valuables. 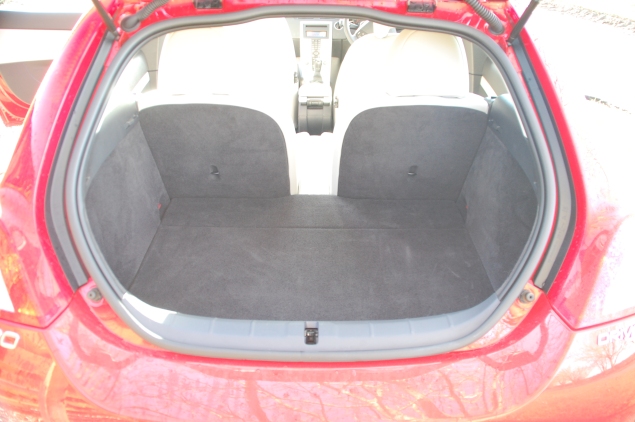 Volvo rarely follows trends and this unwillingness to conform is part of the marque’s appeal. Offering a smaller car to attract customers to the brand could have been done in a more conventional way with a spacious, practical hatchback. But where’s the sense of occasion in that?

Buying a smaller car shouldn’t mean you have to feel you’re moving downmarket nor that you have to forego any notions of owning something that looks and feels special. Styling and marketing the C30 as a coupé reinforces this.

It feels a quality, premium product and in SE Lux trim here is very well equipped with digital climate control, keyless entry and start, leather upholstery, heated seats and Bluetooth connectivity. Plus the test car was fitted with welcome extras like rear parking sensors (£385) and the BLIS blind spot warning system (£460), both of which make living with the C30 even easier.

Even without the DRIVe engine, the Volvo C30 is a distinctive and compelling choice

Driving pleasure is derived not because the Volvo is an excitement-per-mile, hard charging, osteopath appointment-making hatch but because it’s the complete opposite.

It might not be Saintly to do so, but look upon the C30 as the anti-A3 and you’ll be rightly happy with your purchase.

Thumbs Down: Steering wheel too large, steering itself could be more communicative, lack of a standard hard load cover for the boot.