“Space, the final frontier. These are the voyages of the landship Verso. Her seven-day mission: to explore strange new worlds (okay, Lincoln), to seek out new life and new civilizations (no comment), to boldly go where no man has gone before (to be fair, I stayed away from Grimsby).”

Space itself is a precious commodity and one that from the outside at least, Toyota’s Verso doesn’t appear to have copious amounts of. After all, this isn’t a luxo-delivery van in the mode of the old Space Cruiser (and numerous grey imported Town Aces), nor is it a gargantuan, metallic, mid-engined egg à la Previa. Yet despite those compact dimensions, the Verso contains space for seven with a vestigial space behind row three masquerading as a boot too.

So, aside from the enormous Land Cruisers, the Verso is Toyota’s only seven-seater in the UK?

Currently, that’s the case although it’ll be joined by the new seven-seat Prius+ hybrid from July. Similarly to other manufacturers, Toyota’s found the market for a full-size range of MPVs, like the aforementioned Previa, just doesn’t exist in sufficient volume to make it worth importing larger models from Japan or the USA any longer. For larger families wanting to enjoy Toyota’s impressive quality and reliability record, the Verso is the sole choice right now.

Size-wise, the Verso’s in between the regular and Grand Renault Scénic as reference points and dependent on the version chosen, seats five or seven within the same bodyshell and wheelbase length, ensuring external commonality between all models, thus reducing production and tooling costs. 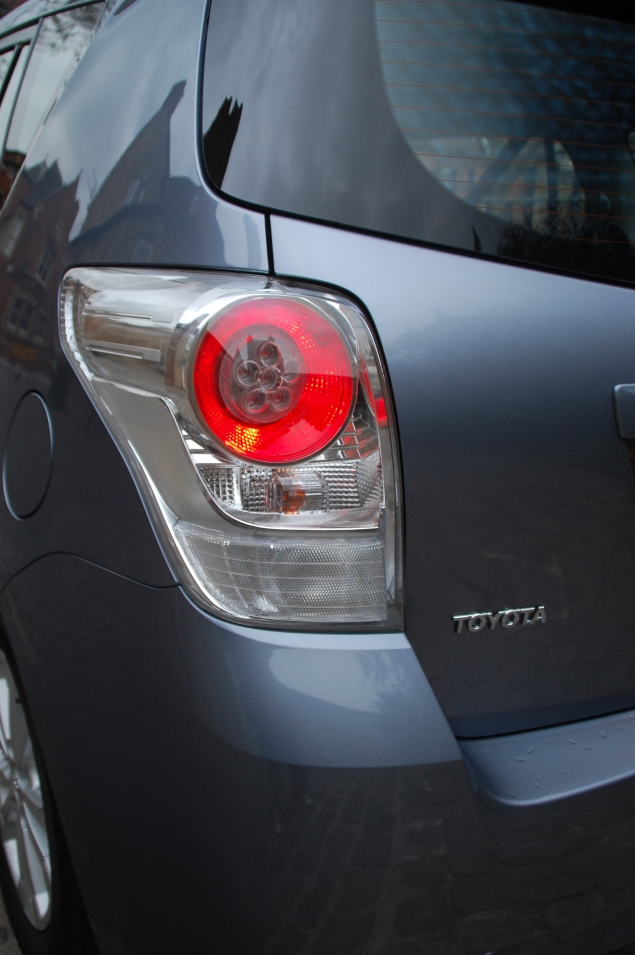 The Verso's rear lights offer brightness to the overall styling

As much as one might try, it’s difficult to get excited about the Verso’s looks, a challenge not aided by the particular shade of metallic grey featured on the test car. Toyota’s stylists tend to have great days (witness the upcoming GT86 coupé for proof) or rather ordinary ones – the Verso sits firmly in the latter camp.

That said, it’s inoffensive so buyers are highly unlikely to be deterred because of ugliness or weirdness. Studying more closely, there are a couple of momentary flashes of flair: the rear quarters in particular benefit from the diagonal styling ridge behind the doors and the elongated clear lensed tail lights feature appealing graphics, including LEDs. But that really is about it; the rest is worthy but uninspired and fails to stand out in supermarket car parks and school runs.

Must be a different story on the inside though? Lots of cool features to keep everyone happy on long journeys?

Open the doors to the Verso and you’re welcomed by large expanses of dark grey plastics. Nicely assembled and with a welcome spread of soft touch plastics it may be, but the greyness remains. 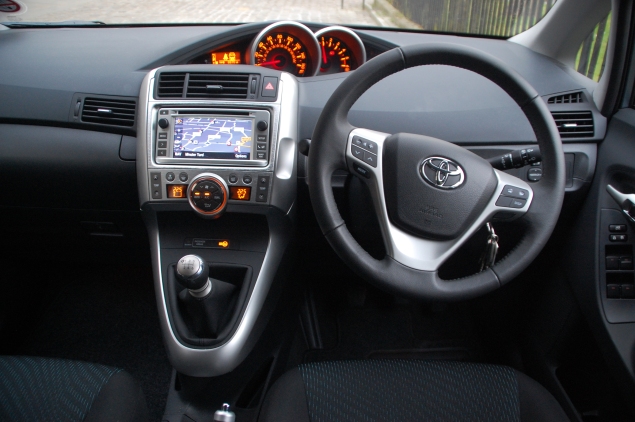 Nestle into the comfortable and supportive driver’s seat and that sense of space pervades the cabin, despite a lack of visual tricks like a glass roof on this mid-range TR specification example. There’s plenty of room for limbs and a generously proportioned hat to be worn, if that’s your thing too.

Verso’s dashboard is dominated by a diagonal slash across the upper surface, which is raised in the middle to house the analogue instrument binnacle. The dials are neat and clear enough but a backlit in amber like Japanese cars of the eighties tended to be. Despite this nod to retrosism you can’t help but wonder how much better the instruments would look on either a TFT screen or a ‘black hole’ similar to that of the first Yaris.

The central console, home to the stereo-cum-satnav and ventilation controls has a multitude of buttons to prod, all of which work efficiently but lacking any sense of delight that makes you want to caress them. A satin silvered finish features a rippled effect in parts, resembling crushed tin foil both in look and feel – unnecessarily low rent.

Feel and poke around the Verso and there’s an overriding sensation of being underwhelmed. TR specification brings welcome touches like satnav, reversing camera, dual zone climate control and a chilled glovebox but other niceties like keyless entry and automatic lights and wipers are reserved for the flagship T Spirit models.

There are a little sops to luxury too like the leather-wrapped steering wheel and manual gear knob, but again the finish isn’t the most alluring in your palms.

Niceties to one side, the Verso’s spacious though?

Fripperies of modern motoring conveniences aside, the Verso’s primary role is to transport up to seven passengers in comfort and safety and this it is accomplished at, with a full complement of five Euro NCAP stars. The three individual seats in the middle row all slide fore and aft as well as reclining, allowing for a wide range of flexibility. The seats slide right up to the back of the front chairs too, allowing little ones to be well within arm’s reach of the front passenger, a potential boon on those occasional miserable, tear-filled journeys.

Verso's middle row of seats are spacious and flexibly adjustable

Access to the third row is simple enough, tipping an outer middle seat forwards to permit graceful ingress, although even a cursory glance at those back pair of chairs confirms they’re the reserve of children and smaller adults. As with the Verso’s primary competitors, the back seats fold neatly and easily into the floor of the boot, meaning that in order to keep the mechanism is compact as possible, the seat frames and cushions are less generous that those of the row in front. For families transporting children around this is less of an issue than if you’re intending to ferry six adults on a regular basis. 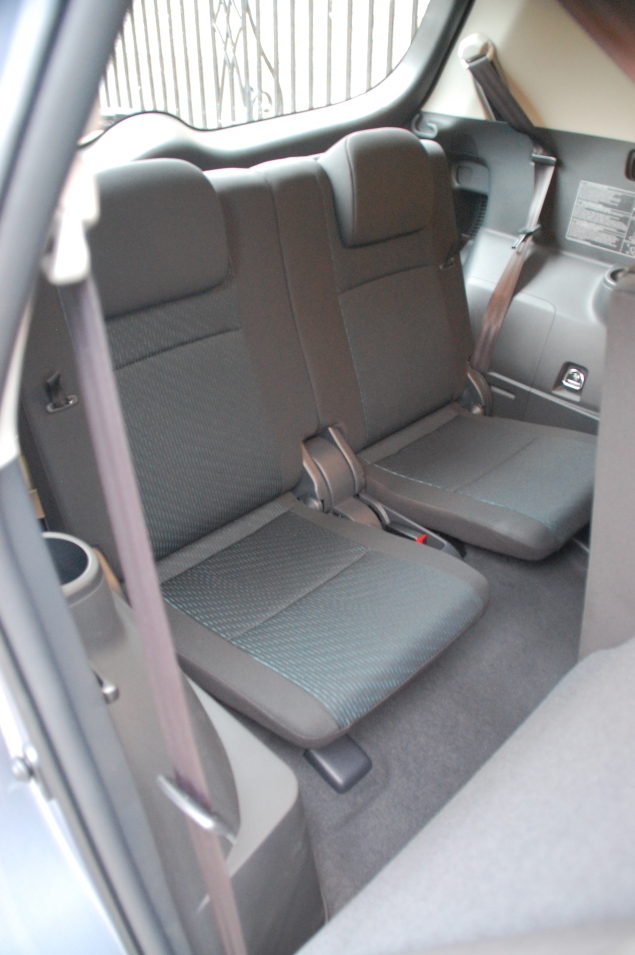 The rear row is spacious for those of a childlike stature. Like children.

Being an MPV of compact dimensions, the boot versus passenger conundrum is ever present. With all seats occupied, you could just about squeeze three soft bags of groceries behind row three but not much else. Pulling on the straps to lower them back into the floor is a totally painless task which liberates a more practical space both in terms of shape and volume. And, when the time comes to convert the Toyota into a van, the middle row fold away effortlessly too. 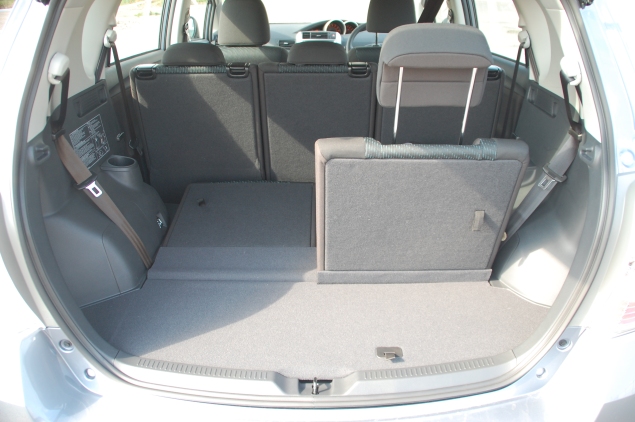 One useful, if not unique, feature is the retractable loadspace cover which can be hidden away under a folding section of the boot floor, eradicating the need to store it in the house or garage when not required.

Any pleasant surprises about how it drives then?

If you’re expecting reports of the Verso being blessed with the handling DNA of MR2s and Celicas of yesteryear, then think again because this Toyota is from the Auris gene pool.

Competency without any surprises is the order of the day for Verso pilots meaning progress is safe, unflustered but also lacking in passion. Usefully for an MPV which might be full of travel-sick prone preteens, the ride is composed and errs towards controlled stiffness rather than floatiness, a feat achieved without inducing the suspension becoming crashy over rougher surfaces.

The obvious upside of this is roll is minimised through bends too, yet whilst the steering itself feels like it might be potentially fun by virtue of not being over-assisted, little of what’s going on in the front wheel wells is communicated clearly. Instead, safe and predictable neutrality is on offer, edging towards understeer the harder corners are tackled.

Operation of the six-speed manual gearbox is slick and precise, proving very light to operate, in conjunction with a precise and effortless clutch action. Drive the Verso with the 125bhp common rail turbo diesel engine as tested and your left hand gets to know the gear lever like the best of friends. The motor itself is torquey but lacks low end flexibility to steam away in whichever gear you’re in: dropping a ratio or two is the only effective way of making brisk progress. 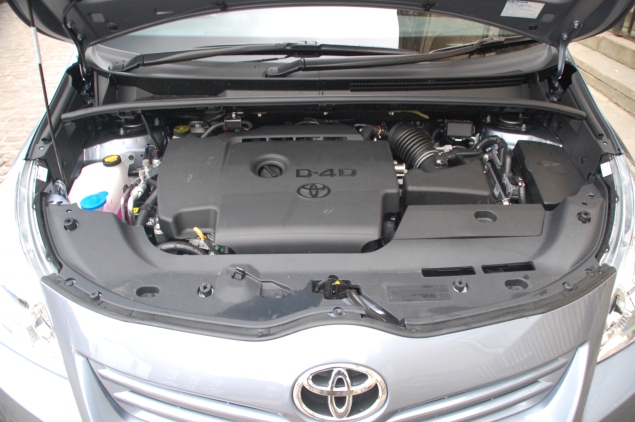 When up to speed, the Verso cruises along at sub-2000rpm quietly without any characteristic diesel gruffness to accompany motorway journeys. Usefully, it’s economical too – not brilliantly so at an average of 44.2mpg (compared to the official claimed average cycle of 53.3mpg), but it is the most fuel efficient of the Versos on offer, with a 1.6-litre petrol manual gearbox or automatics mated to a 1.8-litre petrol and 2.2-litre turbo diesel the alternatives. The situation could be bettered with the fitment of a stop-start function, or if the Prius+ wasn’t looming on the horizon, even the petrol-electric hybrid driveline, as used in the Auris.

Toyota’s Verso is jostling for position in a very crowded market of smaller MPVs with the capability of seating seven and like others in arena, its compact dimensions mean a compromise between luggage and passenger carrying capability.

But with such a wealth of talent on offer for customers, each entrant has to offer impressive flexibility, delightful features and distinctive looks. Whilst the Verso has the first quality and top-spec T Spirits more of the second, the final element is subjective. That said, it’s difficult to be wowed when you come across the Verso.

The Verso is nevertheless competent, if lacking in excitement and let’s not forget Toyota hasn’t chalked up its impressive sales record without understanding that many millions of customers around the world are looking for solid, reliable and unpretentious transportation with a perception of good value in the mix too. If those are your overriding factors for choosing a family car, then the Verso is worth due consideration.

It’s an MPV, Jim but not as we might want it…

Thumbs Down: Devoid of excitement, engine has to be worked to gain performance.