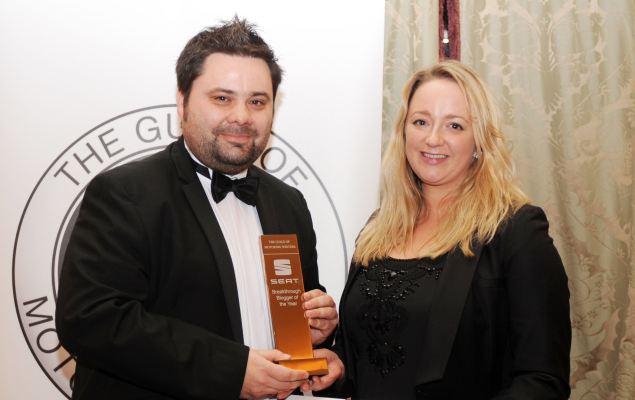 Amongst the long-standing accolades for motoring journalists and authors was a new honour, specifically to acknowledge the burgeoning number of non-professional automotive writers who utilise the power and reach of the internet and social media to interact with their audience.

Sponsored by SEAT, the Guild of Motoring Writers Breakthrough Blogger Award recognises those looking to make the transition from writing in addition to their current careers into professional motoring journalism.

To say that I am ecstatic after being announced as the inaugural winner of the title is an understatement.

I never ceased to be amazed by the warm reception my output on here garners not only from those I know but also from the scores of Twitterati I’ve not yet had the pleasure of meeting. Over the past 18 months, the opportunities I’ve had to get to know and become friends with people whose work I admire has been a genuine privilege.

As the website has grown in both volume of content and popularity, with a correlating increase in the diversity of cars tested and events attended, my ambition to become a full-time motoring writer has become stronger.

When the Guild announced their Award categories at the end of August, the Breakthrough Blogger opportunity seemed like the perfect opportunity. Several months later, after the entries had been pored over and whittled down by Guild Chair Richard Aucock and SEAT’s Juliet Carrington, the announcement at the RAC was due.

To have been shortlisted was already humbling but realising I’d reached the final with Gavin Braithwaite-Smith (aka @MajorGav) of PetrolBlog made the evening very special.

Over the past couple of years, like you, I’ve made PetrolBlog part of my daily internet digest and love the way Gav’s built up his own witty and irreverent online publishing empire. But more than that, I’ve got to know Gav personally and count him as a good friend.

Being Highly Commended in the Breakthrough Blogger category will undoubtedly elevate Gav and PetrolBlog to even greater levels of recognition and success. If by some remarkable (and unforgivable) oversight you’ve not yet indulged in PetrolBlog, make sure you do so immediately after finishing this.

If PetrolBlog isn’t already part of your daily internet schedule, then it should be

Naturally, I’d like to publicly thank Richard and Juliet for their vote of confidence in my work – I fully intend to use the impetus to propel my career onwards. Becoming a member of the rejuvenated Guild of Motoring Writers adds further credence to my growing portfolio.

But I’d also like to thank anyone and everyone who’s supported me over the past 18 months on this journey.

Possibly you’ve stopped by to read a single review or lost hours going over every article with a fine toothcomb. Perhaps you’re a regular social media correspondent or you just observe to soak up the terrible puns. Or maybe you’ve generously imparted your time and advice or you’re part of a professional team of PRs who’ve worked with me supplying a plethora of cars to review.

Whichever category you’d place yourself in, it wouldn’t feel remotely worthwhile without you as part of it.