The all-new Nissan Qashqai will be proudly built in Sunderland, but Nick Johnson was forgivably excited at the prospect of attending its European launch, once our editor Oliver had explained that it was taking place in Madrid. The Qashqai has proved a massive success for Nissan and they are now set on distancing themselves even farther from the pack. Have they cracked it? Let Nick bring you up to speed…

The Nissan Qashqai is a car now firmly ingrained in the UK motoring landscape thanks to its huge popularity, selling two million units no less, since its launch in 2007. But people forget the huge gamble Nissan took when they launched Qashqai as a replacement for the unloved ageing Almera. Qashqai was something genuinely risqué in the rather traditional ‘C-Segment’ market (hatchbacks to you and me), an off-roader appearance without the weight penalty of four-wheel drive (unless you specified it) and with a firm focus on ‘on-road’ manners. It also came saddled with a name that was unpronounceable by some (it’s ‘Cash-kai’ for the record), and unspellable by others. Yet the public lapped it up and the originally forecast sales of 100,000 per year turned out to be well wide of the mark, forcing Nissan to do an Oliver (Twist, not Hammond!) and call the factory in Sunderland and beg for more, double more in fact! The ‘crossover’ as a vehicle concept was born. 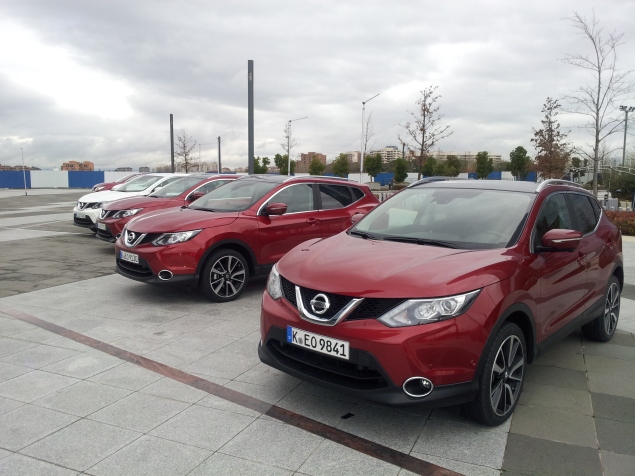 Six years after the launch of the Mark 1, Nissan clearly have the confidence to try another gamble and replace the existing model despite it still shining bright in the sales charts. So, is this the automotive equivalent of the difficult follow-up album? Well yes, but the gamble has once again paid off for Nissan and this next-generation Qashqai will surely be another smash hit. I should really ask Nissan for next week’s lotto numbers going by their past form on gambling success!

The new model ushers in change with a focus on three key areas: Bold design, premium technology and upgraded interior design. The headline numbers speak for themselves:  a reduction of 40kg in mass, reduced CO2 emissions across the range with the lowest now nipping in under the 100g/km mark (99g/km with the 1.5 diesel engine) and a drag coefficient to match that of a Ferrari 360 at 0.32.

One of the aims for this next-generation Qashqai was to bring a dynamic edge to its design. The previous model had a design which was a little too play-it-safe. The new model fixes this and brings a more modern and athletic appearance to the table.

The front of the car benefits from Nissan’s now corporate ‘V-Motion’ Grille with attractive headlights that feature a prominent daytime running light signature and smart chrome detailing. The chrome ring around the front foglights for example was agonised over by the engineers as they adjusted it millimetre by millimetre to get the effect just so. 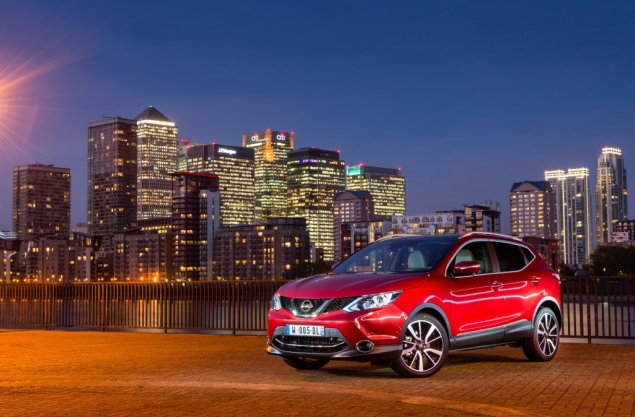 In profile form, the care and attention lavished on the design is obvious from its sleeker form. Don’t forget, it may not look like a Ferrari, but it still shares its ability to slip through the air like one of Italy’s finest.

It sits lower than the previous Qashqai, giving a more purposeful look on the road and combined with some neat creases in the bodywork, chrome detailing around the window edges and rear lamp clusters that provide a smart night-time signature, it all adds up to a Qashqai that whether parked or moving, will attract admiring glances. Try saying the same about many of its rivals.

Climb inside and, despite the lower stance of the vehicle, it retains the high seating position loved by buyers. This is now combined with an interior that is much more premium in feel. Thanks to an optional panoramic glass roof, the interior feels light and airy and, if you opt for the top specification Tekna model, it is down-right plush with leather to the seats, steering wheel and even to the centre console. Ambient interior lighting together with the glass roof lifts what could be a dark interior to something more akin to chic central. However, it’s not only the frivolous who benefit from this uplift in quality as even the base Visia model feels a nice place to be thanks to the piano black plastic inserts to the fascia and subtle details like the chrome door releases.

There’s more room in here too which helps to explain why there will be no seven-seater version with this model. Those that need the extra seats will be catered for by the upcoming X-Trail.

The driving position is spot-on offering good all-round visibility and a commanding view over the road ahead thanks to the raised ride height, which is an important safety feature for many. The seats are incredibly comfortable too; something the mile munchers will appreciate.

If I was being picky, some of the plastics below eye level are hard and cheap-feeling but then this is a car aimed squarely at the rough and tumble world of families so you can’t blame the interior designers for selecting some materials for their durability.

For the technologists amongst us, you can feast for hours on the multitude of gizmos present.  All models benefit from a large colour screen to the centre console which displays all your information and entertainment. The driver is also treated to a secondary dashboard screen that displays useful information such as traffic sign recognition, satellite navigation instructions as well as numerous vehicles displays. Want to check your tyre pressures whilst bowling down the motorway? You can here.

Other technology available includes…*deep breath*… lane departure warning, blind spot monitoring, emergency brake assist (application of brakes automatically if a front collision is imminent), high-beam assist (application of high and low beam on headlights to maximise forward light) and Driver Attention Alert (monitors your inputs more than your local hospital to detect if you are tired and advises when to take a break). Special mention should be given to the Park Assist feature which will self-park your Qashqai into a suitable parallel parking space. If that doesn’t impress the kids in the back, I don’t know what will!

On this official European launch in Madrid last week, I was fortunate to drive all of the models currently offered and opted to start with the new 1.2 turbocharged unit which will prove to be the most popular amongst private buyers. Now you would be forgiven for thinking that such a tiny engine in a big car would result in the kind of a pace that a snail would be used to. But, you’d be wrong and that is the beauty of these new down-sized units which, because of a turbocharger, offer the performance of a bigger 1.6 litre engine whilst emitting a smidgen of CO2 (129g/km) and sipping a gallon of fuel only every 50 miles. And it really does work in the real world, offering more than adequate thrust for city commuting – and when it comes to the open-road, you can relish an engine that actually enjoys being worked hard.  However, drive it like a true Spanish local and the promised fuel economy figures will disappear. On a spirited drive we averaged only 37 miles for every gallon. Better to drive like your local vicar then, if you want the associated fuel benefits.

The other benefit of having a small engine upfront is that it makes the Qashqai feel incredibly light on its feet, allowing you to turn into bends with gusto. It was a real surprise for me, proving to be much more responsive then I had imagined and with a manual gear-change that could be done with one finger. In short it was a delight on the twisty roads outside of Madrid.

The other stand-out point was the sheer level of refinement, with an incredibly smooth and quiet ride. This fine balance between ride and handling has been achieved by Nissan’s new Chassis Control which uses electronic trickery to minimise road imperfections which may upset the balance of the car and will automatically apply the brakes when cornering to provide grip and better turn in. Many other car manufacturers would do well to go cap-in-hand to Nissan’s technology centre at Cranfield to learn a thing or two about chassis development!

It was then on to try the two diesel units. First up was the 1.6 litre (130 PS, CO2 of 119g/km, 61.4 miles per gallon) with the improved CVT (Continuously Variable Transmission) which provides a much greater surge of power at lower revs than the petrol. This means you don’t need to work the car as hard to bring it up to speed, protecting your valuable fuel economy figures. That said, it is not as refined as other four cylinder diesels that I have tried, leaving you in no doubt that you are fuelled by the brown stuff as it rattles away on start-up. At speed, refinement is not a problem thanks to a hushed, seamless power delivery. The CVT gearbox works much better now too and does a great job of fooling you into thinking that you really are changing up and down the ratios as you flick the gear lever up and down. If you do over 12,000 miles a year and effortless power is your priority along with ease-of-use, this is the specification to go for.

The final engine was the 1.5 diesel unit (110 PS, CO2 of 99g/km, 74 miles per gallon) which again provided admirable shove from low engines but tended to get a bit harsh and noisy if worked hard. Better to sit back and let the low down pull of the engine’s torque do its job. The manual gearbox was smooth again in this application but the handling of the diesel cars was not as sharp as the petrol model (you can thank the extra weight upfront for that). However, to achieve a CO2 emission figure of 99g/km in a car weighing 1.5 tonnes is incredible and as we all know lower emissions means reduced company car tax and road tax rates. If prudence is your middle name and you do over 12,000 miles annually, this is the variant for you.

This Qashqai offers improved head and legroom throughout the interior and an increase in boot space by 20 litres to 430 litres with the rear seats in their upright position.

Clever details that stand out are a load cover that can be stored under the boot floor (there are two floors) when loading bulky items. Clever thinking, as how many times have we each loaded up the car, only to stand there wondering what to do with the irritating load cover?! There is also a huge central console storage unit which has the ubiquitous connector for your MP3, but Nissan have been clever to design a channel for the wire meaning you can operate the device outside of the box.

This next generation Qashqai improves on every area when compared to the first generation car and although since Nissan launched this very first ‘Crossover’ a multitude of other rivals have been launched, the original is still the best car in its class in my view. If you are in the market for a family car that will do all you ask of it, whilst keeping the driver and passengers entertained, I reckon the Qashqai is hard to fault.