On this pleasant, sunny day in February, I headed down to the beautiful surroundings of Kilworth House in Leicestershire for a day with Renault and Dacia, during which I would hopefully experience some va va voom. Naturally I couldn’t resist driving down in my Vel Satis and I was touched when I saw that ‘Hubert’ notched up quite a few admiring double-takes from various people throughout the day. It was just ironic that today of all days was the first time in years that he decided to spit his dummy out, so fortunately it was only momentary. 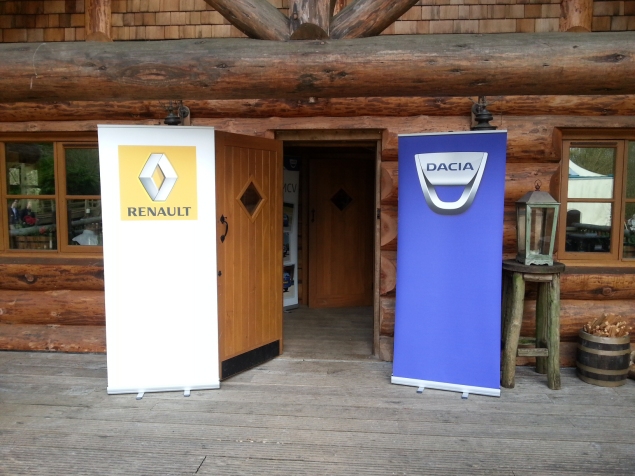 Seeing a Twizy gathering always brings a smile to my face but I had a limited amount of time today and have already briefly driven the surprisingly good Dacia Logan MCV, so my agenda was firmly set on comparing the new Renaultsport versions of the Clio and Mégane. 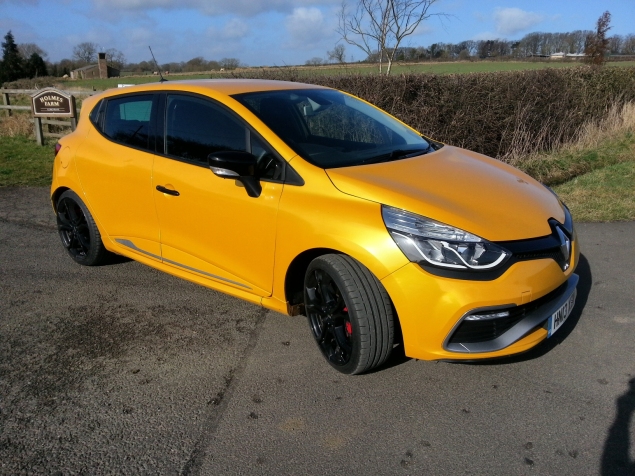 Surprisingly, despite coming from a family with a car history made up almost entirely of Renault models and me driving all kinds of cars on a regular basis, I’ve never actually driven a Renault hot hatch. Heading down to Kilworth, I viewed this as a positive, as it gave me a completely fresh perspective.

With such blistering performance promised, I knew the seats would be cossetting, but I personally found them a little uncomfortable. Everything about the rest of the interior felt modern, sturdy and practical, so no quibbles there.

The EDC stands for Efficient Dual Clutch and is basically a 6-speed automatic gearbox with manual shifting using either the flappy paddles or the gear shifter.  A supermini with supercar-rivalling downshifts, launch control, ESC that can be fully switched off and switchable Sport and Race modes certainly got me excited – and the Clio didn’t disappoint.

Although I wasn’t able to assess its cornering too deeply in my shortish stint behind the wheel, I certainly did put the gearbox through its paces and can vouch for its snappy gear changes. Even in Normal mode, the Clio RS was a hoot to drive. Pressing the R.S. Drive button and putting it in Sport mode stiffened the handling, sharpened the throttle and quickened the gear changes noticeably – and selecting Race Mode made everything become rather mental. I’ll take Renault’s word for it when it comes to 150 milliseconds gear changes but I certainly managed a bit of tyre squeal and the acceleration is exhilarating to say the least. Many purists dislike the EDC ‘box and I can understand why in theory, but for someone unacquainted with previous manual incarnations of the Clio RS and someone who appreciates that automatics take a bit of rapport-building, the EDC grew on me. Besides, it allowed me to focus on finding the right line through bends to keep up the pace, and certainly made a better job of attacking the horizon than I could have done.

Available only as a 5-door this time, the latest Clio RS also differs in that it has a 1.6-litre engine, compared to the previous 2-litre, yet it achieves the same BHP figure, is more economical (an amazing 44.8mpg combined, they reckon – which must be with sedate driving, surely?) and produces 25Nm more torque. Nice one, Renault. Granted, the boot’s too small for the kitchen sink, but I can definitely see the Clio RS being a hot 6.7-seconds-to-60 supermini suitable for everyday ownership. The £22,355 (as tested) price tag may sound steep but you’re getting a lot for your money and it compares well to its rivals. 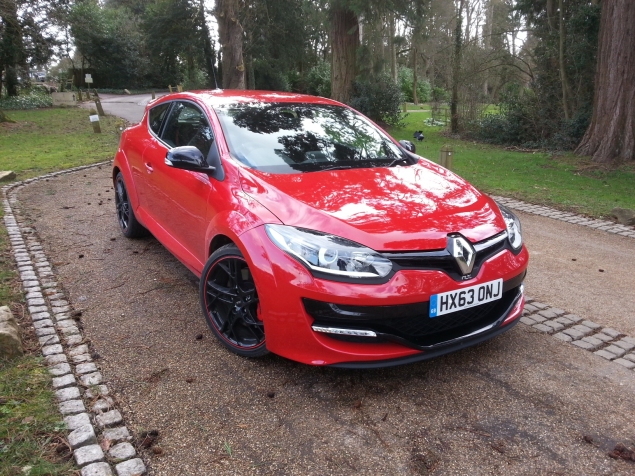 The new Mégane Renaultsport only comes in one trim level, which I like, as it keeps things nice and simple. A stripped-bare Cup model is available for hardcore buyers, but you can think of the version I drove today as the best blend, mixing the normal car’s high kit levels with the tweaked Cup Chassis Pack. One of the visual clues is the red brake callipers, whilst under the skin, you get a limited slip diff’ along with stiffened springs, dampers and anti-roll bar. I really like the new Mégane RS’s face and general styling tweaks. Inside, it looked a little more traditional than the Clio with not as many splashes of colour, and the big digital screen was nestled into the dashboard as opposed to at the top of the centre console. I found the Recaro sports seats perfect and couldn’t wait to see how the Mégane’s manual gearbox and mightier power compared to the Clio RS when it came to fun.

I’ve driven some mighty fast cars this year, some with double the power of the Mégane RS 265, but the beaming smile left on my face by this Gallic hot hatch really did leave me with the impression that this is one special car. Unlike the Clio’s more obvious R.S. Drive button positioned by the handbrake, the button in the Mégane was plain black and hidden away. Anyway, I found it and couldn’t get enough. The throttle response and acceleration were truly addictive and although I found the physical gearstick a little notchy at first, it grew on me and I really fell for the Mégane once I’d found oneness with the ratios.

The feedback through the steering wheel, the sharp handling, the poise from the taut chassis setup and the sublime acceleration really did egg me on to push the Mégane 265 that little bit harder. I had about 45 minutes in which to sample the car before returning it to base, and I was on country roads in Leicestershire, not on a track, meaning I probably only scratched the surface of what the car can really do. Even with ESC diluted right down in Sport mode, the Mégane always gave me the impression that it was on my side, working with me and for me, not against me.

The Mégane RS 265’s engine produces 250bhp until you press the Sport button, giving you the extra horses, and with a 0-60mph time of dead-on 6 seconds and a top speed of 158mph, it’ll be more than enough for many buyers, with a surprising published combined cycle of 37.7mpg to boot. The downsides worth noting are that it’s only available as a 3-door, so isn’t as practical as the Focus RS, and the ride is pretty firm to say the least, which could detract from everyday urban driving. The car I drove was priced just under £32,000, obviously costing more than the Clio RS. If I could have kept the keys to one of them, it would definitely be the Mégane. 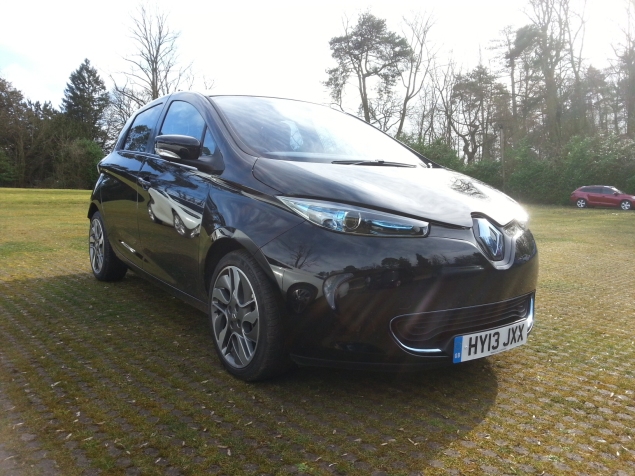 Sandwiched between the two new Renaultsport models, I grabbed a quick drive in a ZOE for the first time, and was joined by Chris Auty who jumped in so we could have a catch-up. Driving days like these always only ever give you a brief snapshot of each car, as opposed to week-long press car reviews where you can really get under a car’s skin. This ZOE marked my debut driving an average-size electric car, after my baptism in a diddy little electric Smart at Millbrook last year. Today I just wanted to gain a brief driving impression, not debate the minutiae surrounding battery leases, ranges and the like.

Naturally, ZOE’s silent startup and initial acceleration were eerily quiet and getting it going was like any other automatic, simply shifting it into Drive. Inside, it felt and looked like other cars, with nothing made out of celery or covered in hessian. I was set on driving the ZOE sedately, in my mind mimicking a typical owner’s style. On A and B-roads it performed very pleasantly, wafting along in a refined way. Put your foot down and it reaches 30-40mph reasonably quickly with a responsive throttle owing to the 88bhp electric motor’s torque, but the acceleration quickly plateaus off with the feeling it’s running out of zip.

With an average suburban driving range of about 75 miles, ZOE is definitely more suited to local pootling and would be perfectly adequate for shopping, the school run and the like. Potential buyers would need to get their calculators out and do plenty of sums, though, as a normal petrol or diesel car may make more sense, by the time they’ve accounted for ZOE’s various costs. Depending on the trim level, a ZOE costs between £18,000 and £20,000 to buy, with £5,000 deducted through the Government’s Plug in Car Grant. On top of the £15,000 average price left to pay after the grant, ZOE costs from £70 up to £103 per month for battery hire, which includes breakdown assistance. With DAB digital radio and Renault’s excellent R-Link system with TomTom, text messaging and apps plus other useful stuff like a charging point map, ZOE is stuffed full of technology as you would expect. Both Chris and I achieved a 77/100 score from ZOE’s computer, so I’m intrigued to find out what others scored.

I’ll leave you to do the maths according to your circumstances, but for the environmentally conscious and especially motorists who mainly stick to their local area, the electric ZOE is definitely worth weighing up.

Thank you to Lisa, Jeremy, Yann and the rest of the Renault team for your hospitality. I look forward to seeing you all again soon, when hopefully you will bring some sunshine with you again.