When it comes to holidaying, my wife and I feel that Spain offers all one could ever desire, but many of our friends swear by France. Go out for a meal with us and we typically favour Spanish wine over Italian and generally find our taste buds satisfied more fully by lamb than beef. Down the pub, I most certainly prefer wetting my whistle with ale, not lager. It’s all down to taste, with little difference between such respective choices; no rights or wrongs. The same is true of the Bentley Flying Spur, now they’ve given the revered W12 powerplant a V8 friend to play with. But what’s Winston Churchill got to do with it? 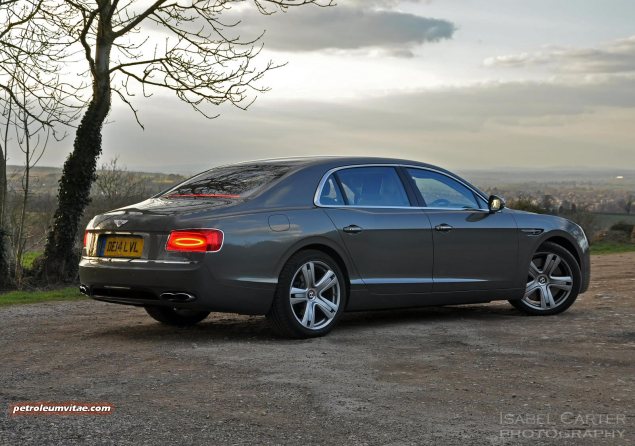 Of late, many car marques have begun downsizing to reduce their line-ups’ overall emissions in a nod to the environment, but in Bentley’s case as a purveyor of opulent, bespoke automobiles, their hand has somewhat been forced. The Crewe-based firm’s largest markets are the Americas and China, and legislation in the latter heavily taxes engines with displacement exceeding four litres. Since fitting the Audi-derived V8 into the Continental GT, Bentley has seen it gradually become slightly more popular than the W12 in those key markets, so offering the Flying Spur as a V8 here in the UK seems like a good strategy. After all, priced at the mid-point between a top-spec’ Mercedes S-Class and a Rolls Royce Ghost, it may attract new buyers to the brand.

There’s little to visually distinguish the V8 Flying Spur from the W12, so next time you see one on the road, check whether the ‘B’ badge is set on a red background and if the exhaust outlets are squeezed in the middle, like a figure of eight turned on its side. The Flying Spur has in design terms always been one of my favourite saloons, so I’m glad it’s only been subtly fettled. In the flesh, it’s enormous and in my view, really quite beautiful, more so than a Rolls Royce. It’s a shame the youths congregated at a set of traffic lights in Stoke didn’t share the same Flying Spur love, or maybe they did and I just interpreted their hand gestures wrongly. Most other motorists, however, seemed in awe of this mammoth and graceful Bentley saloon, which possesses tremendous road presence.

Customers can tailor their Flying Spurs in seemingly endless ways but I’d be quite happy with this Granite exterior with Portland & Beluga primary and secondary hides on the inside, finished off with 20”, 5-spoke alloys. The ‘Bright Tint aluminium fascia and door panels’ looked 1970s-esque in my wife’s view, whereas I thought they resembled fish scales. In any case, the interior was by and large simply beautiful, from the sumptuously soft, diamond quilted leather seats with contrast stitching, to the deep pile overmats and chrome organ-stop vent controls. I’d be here ‘til next Easter if I described in detail what each comprises, but the highlights that impressed me from the Mulliner, Comfort, Multimedia and Convenience specification packs were the independent rear screens with DVD players cleverly hidden in the front seat backs behind chrome flaps, the twin front armrests with integrated telephone, the smartphone-like Touch Screen Remote which rose up out of its dock at the touch of a button and allowed rear occupants to control everything from internet hotspots and climate to the electric rear blind and vehicle trip data, to the hidden safe, fridge/cooler, Bentley-branded cordless headphones, ashtrays and electrically-adjustable and heated/cooled rear seats. The ‘Naim for Bentley’ premium audio system left me utterly amazed, just as it did in the Continental GT W12 Speed convertible I had on test last year.

It’s very hard to be critical of such an opulent, luxurious interior, in which legroom is abundant and passengers are cocooned from the outside world in serene silence thanks to obsessively effective soundproofing. I personally perceive the Bentley-branded sunglasses case as somewhat brash and I would choose to specify my Flying Spur without logos embroidered in the headrests, but that’s just me. Yes, Bentley is a member of the Volkswagen Group family, but a small number of the buttons and controls curiously felt and sounded quite harsh, bettered by those in a Skoda. The touchscreen audio and sat nav systems behaved in a rather lumbering manner at times and now look a little dated in visual terms, and just like in the GT, I had to reacquaint myself with the positioning of the gear paddles and indicator/wiper stalks, but perhaps the former are intentionally situated just out of reach, as the Flying Spur is more about wafting than sportiness. 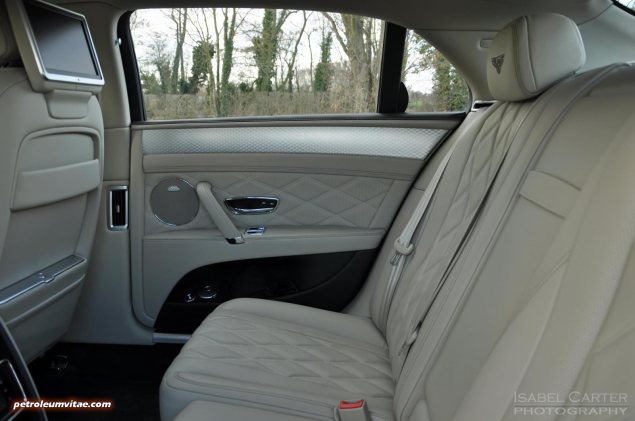 Bentley interiors may lack some of the absolute cutting-edge features found in a Mercedes S-Class or Audi A8, for example, but where the others lack much soul, Bentleys ooze it in abundance and instil a sense of occasion each and every time, tastefully blending modernity with a good dash of old-school charm and timelessness. Only Rolls Royce is a credible rival in this respect.

The stalwart W12 roars into life with a splendid symphony of sounds, so I was struck by the restrained nature of the 4-litre V8, which was silent at idle. A clever engine, it combines powerful twin-turbo grunt with environmentally-friend cylinder deactivation technology, running on four cylinders when the situation allows – and I found the transitions to be barely discernible. Such a quiet engine at slower speeds, it’s a great choice for London chauffeurs and their employers when it comes to refinement, plus it’s greener than the W12 at the same time. 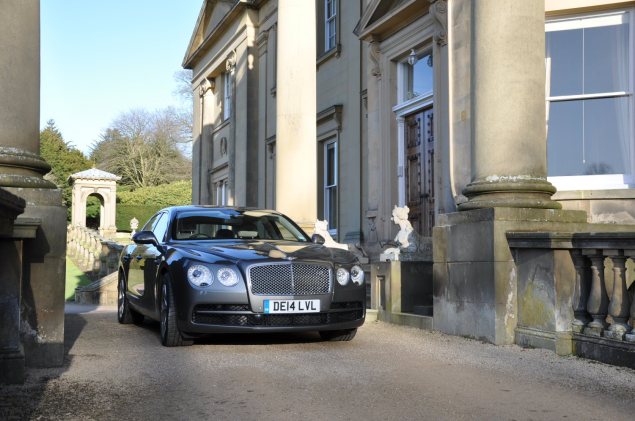 Comparing their stats on paper, 616bhp and 800Nm from the 12-cylinder versus 500bhp and 660Nm from the V8 makes you wonder if the newcomer will disappoint. The answer most firmly is that it doesn’t. Weighing two-and-a-half-tonnes, give or take, the way the V8 engine propels this thing to 60mph is quite remarkable, taking 4.9 seconds, which is only 0.6 seconds slower than the W12. Okay, the W12 is audible more of the time, but as a V8 lover, I wasn’t significantly underwhelmed by the V8’s muted soundtrack, which could be coaxed out of its shell by clever use of the throttle, and naturally became more vociferous at full pelt. Using the paddles and flooring the V8 Flying Spur on a straight road was more than enough to bring on a beaming smile, with no regrets over it not having a W12 under the bonnet.

A heavy, long car like this was bound to lean a little during sharp cornering, but the air suspension and added grip from the four-wheel drive system resulted in a rather more fun experience than I was expecting, meaning spirited chauffeurs or indeed owner-drivers will be rewarded once they escape towns and motorways and get out into the countryside. The top speed of the V8 is 183mph whereas the W12 will allow you membership of the 200mph club, but such figures are academic here in Blighty.

Running on 20” wheels, the ride was surprisingly a little fidgety and overly firm at times, despite the presence of air suspension, but on the whole, the chassis did a decent job and the way it tackled speed bumps was truly superb. Just like the Jaguar XJR I reviewed last, the Bentley Flying Spur also has an 8-speed gearbox, which proved fractionally ponderous compared to the big cat’s, but once the twin-scroll turbochargers and four-wheel drive kicked in, the chariot from Crewe certainly felt smooth enough and fast enough.

We covered approximately 370 miles during our week with this Flying Spur V8 Mulliner and averaged 22mpg, which is only marginally less than the official, published figure, and our mileage comprised plenty of very zealous driving indeed, which simply shows how well the 4-litre engine balances sporty performance with very respectable economy. The base price for a Flying Spur V8 is around £135,000 and the W12 merely costs £10,000 or so more. Our test car came with £40,000 of options fitted, some of which are standard on the W12, but bear in mind DE14 LVL was in full Mulliner spec’. Calculating all the various permutations would be senseless as Bentleys are bespoke, tailored cars, individually specified for each customer – but in short, there’s not a huge financial difference between a V8 and W12 in terms of purchase cost, at the end of the day. I can see newcomers to the Bentley brand perhaps favouring the V8 due to past experiences in German offerings from lower down the luxury pecking order, whilst traditional Bentley loyalists may stick religiously with the W12, which keeps getting tweaked so that it’s even more remarkable. In America and China, V8 Bentleys now account for half or more of total sales. Choosing one over the other would not be wrong in any way. It’s all down to personal preference – and perhaps the V8 having a range of 500 miles before refuelling, which beats a W12 hands down.

The V8 Flying Spur feels just as special, costs only fractionally less and will prove relatively more economical to run, but maybe knowing that your handsome and luxurious Flying Spur has that W12 engine under the bonnet is enough to make you choose otherwise. It must be like being presented with two very attractive cushions in an antiques shop, both identical, but one costs £50 more than the other because Winston Churchill sat on it. No guests in your home would ever know the historical story behind the cushion unless you told them, but you would always know. Decisions, decisions.