These days, public appetite and indefatigable marketing campaigns ensure that most car manufacturers’ line-ups include a B-Segment compact crossover and I briefly drove a brace of such cars back-to-back at SMMT Test Day North 2015. Despite Jeep’s evergreen popularity in its homeland across the pond, Europe, including the UK, has tended to lump the brand’s marvellously capable creations in the ‘other suggestions’ list when it comes to larger SUVs. Jeep’s foray into the smaller, B-segment category cunningly plugs a hole nobody else had thought of filling, the Renegade providing compact crossover buyers with a rugged option, properly capable off-road.

Ardent Jeep loyalists will appreciate Renegade bearing the brand’s iconic seven-slot grille and circular headlights, incorporated into an unashamedly boxy but oh-so-cool package, which helps it appeal to a younger audience, both male and female. The chic ‘X’ design of the rear lights is inspired by Jerry cans strapped to the back in days gone by, and the shiny alloys provide some extra bling, whilst beefy wheel arches and chunky black plastic bumpers provide reminders as to the brand’s 4×4 heritage. Over 4 metres in length and nearly 2 metres tall, Renegade radiates significant road presence and its popularity has helped Jeep achieve 195% year-to-date growth in the UK, at the end of its third-best month of all time here.

Renegade’s elevated, commanding driving position is all part of the compact crossover segment’s appeal and its expansive windscreen and hefty door mirrors provide excellent visibility, which, along with its off-road ability, create a sense of abandon and freedom. Those with impaired mobility will be glad to know that the seats can be slid as opposed to climbed into and I managed to find a comfortable driving position with ease. It’s no surprise that various components from parent company Fiat have made their way into Renegade’s cabin and several surfaces and controls feel plasticy but this actually helps reinforce the ‘go anywhere’ image of the model’s 4×4 versions, complete with a chunky grab handle for the front seat passenger, ‘Since 1941’ boldly etched into the dashboard in an army-style typeface, and a rev counter featuring a mud splatter graphic. Ergonomically, the cabin works well and there’s a colour touchscreen powered by Fiat’s Uconnect system, although Longitude trim meant it was a 5” affair, as opposed to 6.5” in Limited and Trailhawk versions. Renegade’s cabin offered plenty of head and shoulder room, but legroom in the back felt slightly limited. There’s wasn’t time to assess the boot thoroughly but it looked adequate for modest use, and the back doors open widely, making Renegade a good choice for families.

The Renegade engine range includes a variety of petrol and diesel units and, depending on trim, front-wheel or four-wheel drive can be chosen. The former is likely to prove more popular but I’d personally take a 4×4 version. Fiat’s latest common-rail 2-litre Multijet II diesel engine uses variable geometry turbocharging and produces 140bhp and maximum torque of 350Nm. It came across as relatively refined and adequately punchy at lower speeds, and working up and down the 6-speed manual gearbox was a pleasant experience as I hustled along narrow country lanes, the Jeep shrinking around me, encouraging added zeal. Flooring it simply created a lot of clatter, but high-speed driving proved smooth and not particularly lacking. Consumption-wise, I averaged in the mid 40s, which is pretty respectable. Renegade’s electric steering system wasn’t especially engaging but few rivals excel here either, the large wing mirrors created a fair bit of noise, and visibility when pulling out of junctions was limited because of the thick pillars, but Renegade’s on-road driving experience was generally good fun.

Most Renegade buyers will stick to the Tarmac, but it felt reassuring having switchable four-wheel drive at my disposal, the Selec-Terrain system coming with Auto, Snow, Sand and Mud modes. Trailhawk versions of Renegade even come with a ‘Rock mode’ low range gearing system.

Renegade isn’t cheap at £25,795 as tested but I reckon I’d take one over a ŠKODA Yeti Outdoor, which looks rather sombre in comparison and lack’s the Jeep’s fun image. The only other reasonably competent 4×4 rivals in the segment are the Fiat 500X, which shares the same platform as Renegade, Suzuki’s Vitara and the other car I drove at SMMT North – Tivoli, from SsangYong.

Like Jeep, Korean car manufacturer SsangYong is also synonymous with properly rugged and capable off-road vehicles, an underdog brand known more for towing ability and practicality than attractive styling. Entering a segment awash with options, from Nissan’s Juke, Renault’s Captur and Vauxhall’s Mokka to Peugeot’s 2008 and Ford’s EcoSport, Tivoli is a bold move by SsangYong.

Previous SsangYong creations have sent some people running to the hills in disbelief over their styling, but not being restricted by a family face to follow, Tivoli marks a new direction and boasts fresh, modern styling, offering something aesthetically a little different, whilst still meeting B-segment criteria. Stare too long at Tivoli’s design and it may begin to appear rather busy, but the hawkish headlamps, muscular side profile, curvaceous rear lights, diamond-cut alloys, tinted windows and rear spoiler endow it with a distinct, sporty elegance.

I drove Tivoli in ELX trim, which wants for nothing, complete with full leather, front fog lights, automatic headlights, power folding wing mirrors, dual zone climate control, a 7-inch colour touchscreen with TomTom navigation, a reversing camera, iPod and Bluetooth connectivity and keyless start. Although poking around the cabin’s extremities revealed some cheaper materials, it certainly felt built-to-last and modern, and space was in abundance for both front and rear occupants. During the brief test drive, Tivoli’s interior proved comfortable, ergonomically sound and really rather pleasant as a package.

Starting up the 1.6-litre diesel engine, I was impressed by its refinement, and on the open road it performed in a fairly hushed manner, too, clatter only manifested when it was pushed. Statistics of 115PS and 300Nm torque position it in similar territory to most rivals and power delivery felt smooth. If you’re after grunt and thrills, you’ll obviously need to look elsewhere, as Tivoli has a 0-60mph time of 12 seconds, but its power will suit the majority of drivers and the engine is Euro6 compliant, which is worth noting after the recent VW scandal. CO2 emissions of 113g/km and 65.7mpg heighten Tivoli’s appeal.

In diesel, front-wheel drive guise, Tivoli didn’t exactly prove a revelation on the move but acquitted itself well alongside most segment rivals. Not a great deal of feedback was provided through the steering wheel, but this is a complaint levelled at many other cars, and Tivoli’s drive didn’t feel shockingly lacking in any aspect. Enthusiastic cornering saw body roll kept in check fairly well and although the suspension was a little bouncy at high speeds and over poorer surfaces, it did a decent job on the whole, and the 6-speed manual gearbox worked well enough physically and seemed to have nicely-judged ratios.

Tivoli’s primary USP is its keen pricing, ELX trim totting up to a mere £17,250 on the road, which is simply excellent considering all the toys and comforts provided. Entry-level SE trim starts as a remarkable £12,950, for which you still get alloy rather than steel wheels, and the range-topping, four-wheel drive ELX Tivoli with an automatic gearbox and Styling Pack still costs less than £20,000. 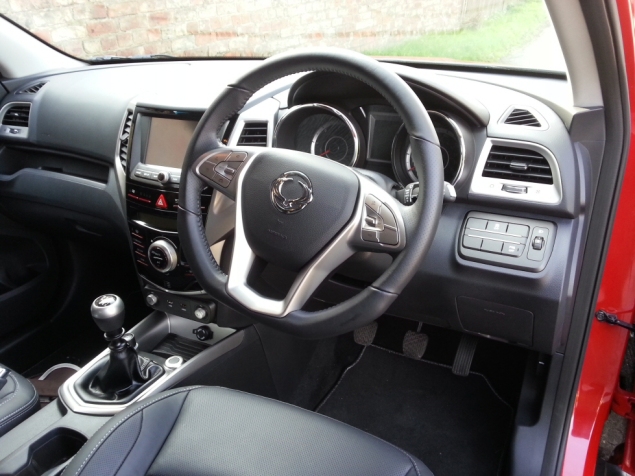 My labelling Tivoli’s handling as ordinary should be taken as a compliment, signalling that SsangYong finally has a car good enough to be considered one of the crowd. I wouldn’t go quite as far as saying ‘ilovit’ (Tivoli spelt backwards), but after my brief drive of a front-wheel drive diesel version at SMMT Test Day North, ilikit and hope it goes on to do well.