Take the latest five-seater Qashqai, stretch it, and you’ve got yourself a new X-Trail, in effect, as the two share the same platform, along with Nissan’s current family face. The new X-Trail is therefore an attractive SUV, with a curvier, more fashionable design than the boxy original version, which was pitched more as an off-roader than a family-focussed crossover. Nissan no longer sells the Qashqai with a ‘+2’ option, so seven-seater duties are handed to the new X-Trail. I’m not personally a great fan of the test car’s Copper Blaze paint job, but in any case, it looks splendid in range-topping Tekna trim with 19” machine-cut alloys, satin roof rails, attractive daytime running lights and privacy glass. 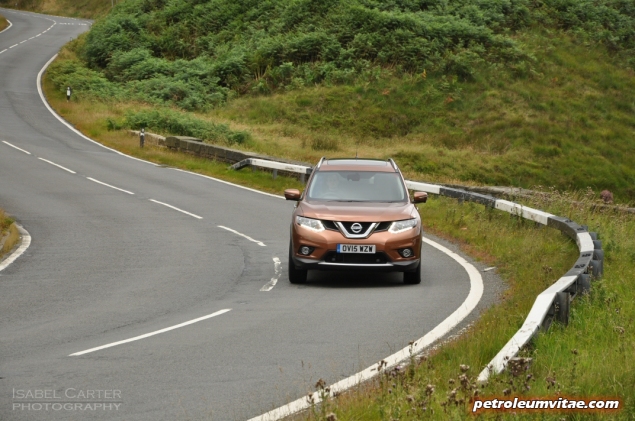 Some large SUVs require a person to climb up into them in order to take advantage of their commanding driving positions and enhanced visibility, but like its closest rivals such as the latest Kia Sorento and Hyundai Santa Fe, the new Nissan X-Trail can be slid into comfortably thanks to the sensible hip height. Inside, it’s an abundantly spacious car with high perceived build quality, and extra light is let in courtesy of the panoramic roof. The dashboard is more curvaceous than the utilitarian, straight affair in the original X-Trail, with smart black gloss inserts and a colour touchscreen surrounded by sensibly laid out buttons; but some cheaper plastic surfaces and controls can still be found in certain places.

All X-Trail versions are well appointed as standard and the test car came with DAB radio, a remote control sound system, Bluetooth ‘phone connection, touchscreen sat nav which works intuitively, an electric-closing boot, reversing camera and Nissan’s birds-eye ‘around view monitor’, so manoeuvring and parking an X-Trail is a doddle. For my tastes, the front seats lacked comfort at times, with little adjustment, and the velour-like cloth trim looks a little old-fashioned, but in general, the interior is a masterclass in family practicality, with plenty of technology to keep everyone entertained and safe. Perhaps owed to Nissan being Japanese, finding sun visors the size of table mats was a most welcome discovery.

The three rows of seats are theatre style so that occupants sat in the boot can see fairly well, and small-to-moderate adults should be able to get comfortable back there, not just children. With the two rearmost seats erect, boot space inevitably becomes quite limited as shown by my wellington boots, but with only two rows of seats in use, the new X-Trail is cavernous, with 550/1,982 litres up for grabs. The clever Luggage Board System provides just shy of twenty different storage combinations, which is great for families, and the boot lip is impressively subtle, too, aiding the load-in of bulkier items. Additionally, the rear doors open nice and wide, once again cementing the X-Trail as a superb car for those with children. 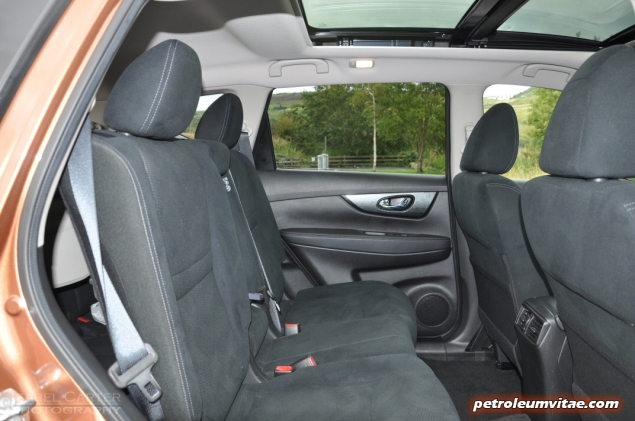 The new Nissan X-Trail weighs 1.5 tonnes, so with power coming from a 130PS, 1.6-litre diesel engine, it’s no surprise that it lacks power in certain situations, such as when encountering unexpected gradients or overtaking on the motorway, plus in the first few gears it sounds quite clattery. The Stop/Start system caught it out at times in slow-moving, queuing traffic, and I found that the ignition and central locking systems sometimes became confused when I trying to lock it, but on the whole, the modest diesel engine performs remarkably well considering the mean feat it’s been set. The six-speed manual gearbox is slick to use, which is a good job, as driving a diesel X-Trail requires frequent gear changes. The clutch feels heavy at times but the electrically-assisted steering is pleasantly light, aiding manoeuvrability in town, although it lacks feel on bendy roads.

In urban environments, the X-Trail Tekna’s 19-inch alloy wheels rather crash through potholes and manhole covers, so choosing smaller wheels is important if ride comfort is a priority, but where the new X-Trail excels and comes alive is when it’s driven on winding, undulating country roads, its sizeable dimensions belied by the enjoyment that ensues. As expected from a car this tall, zealous cornering results in some leaning and body roll, but Nissan’s Chassis Control works to keeps things in check. The full suite encompasses Active Engine Braking, Active Trace Control and Active Ride Control. The new X-Trail is a safe vehicle, too, fitted with Nissan’s Safety Shield Technologies, including Forward Emergency Braking, Lane Departure Warning and Traffic Signal Recognition. A sensibly-weighted right foot will reduce the likelihood of any wheelspin from the 2WD version and Hill Start Assist is yet another feature that makes it a pleasant car for all types of drivers. Wind noise can be detected on motorways but the X-Trail is a quiet SUV on the whole, once it reaches cruising speeds.

I averaged 52mpg combined after a couple of hundred miles, meaning the X-Trail seems considerably more economical than the 2.2-litre Kia Sorento KX-2 I drove not so long ago, but admittedly the Korean came in 4×4 guise. Nissan’s new X-Trail can also be specified with 4WD, a CVT transmission and/or a 1.6-litre petrol engine, but the front-wheel drive, diesel, manual version as tested will no doubt be the most popular. Few X-Trail owners will venture too far away from the beaten track, but the 210mm ground clearance and 350mm wading depth will inspire confidence in the winter months. Priced at £29,385 in Tekna trim with only metallic paint (£550) and the two extra seats (£800) specified as options, the new X-Trail seems like good value. In the environmental department, it emits 129g/km of CO2, which translates to a BIK rate of 23% for the 2015/16 tax year. Nissan only offers a three-year warranty as opposed to Hyundai’s five years and Kia’s seven, but reliability should be good if the Qashqai is anything to go by. Nissan’s new X-Trail really is all things to most people, its appeal touching a wide spectrum of drivers, from families and dog owners to adventurous types and even antiques dealers. It’s certainly worthy of consideration for anyone contemplating a crossover SUV.