From Coco Chanel and Hubert de Givenchy to emerging designers like Christelle Kocher and Etienne Deroeux, France has always been one of the world’s foremost exponents of fashion design, and the nation’s love of style has perhaps inevitably long influenced other facets of French society from haute cuisine and architecture to cars. Peugeot’s original 3008 aimed to partly perpetuate the French love affair with MPVs while blending in a crossover twist at a time when cars like the Nissan Qashqai hatchback-on-stilts were beginning to tear up the rulebook and lay the foundation for today’s SUV obsession. 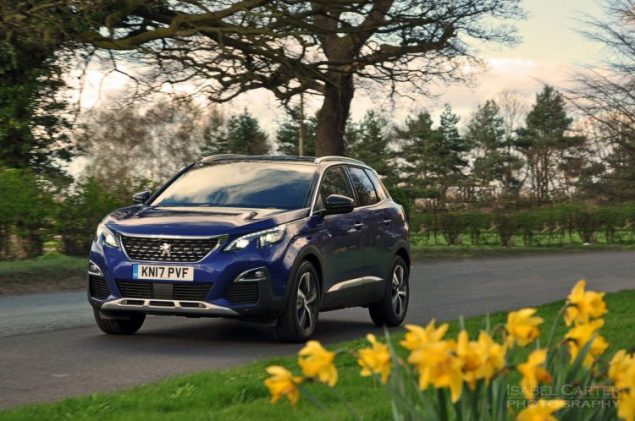 + Oozes stylish charm inside and out
+ Quiet, frugal and lovable 1.2-litre petrol engine
+ Comfortable, refined and relaxing experience
+ Packed full of entertainment and safety gadgetry
– Interior build quality patchy in places
– Not quite as spacious as many rivals
– High standard specifications reflected in lease/retail prices

“Cargo trousers have been something of a trend for several seasons now – [but it’s one] that works for some people and not for others,” commented Samuel Smith, creative director at menswear retailer, oki-ni, his sentiments echoed by fashion blogger Sean McCoy: “Cargo pants are wonderfully useful, but fall way short in the style department.”

Their words could easily be applied to the first generation 3008, its divisive looks surely putting off some prospective buyers, whilst others adored its elevated ride, load-lugging capabilities, diesel-electric hybrid novelty, and split tailgate, which proved a handy perch for ramblers and the like. 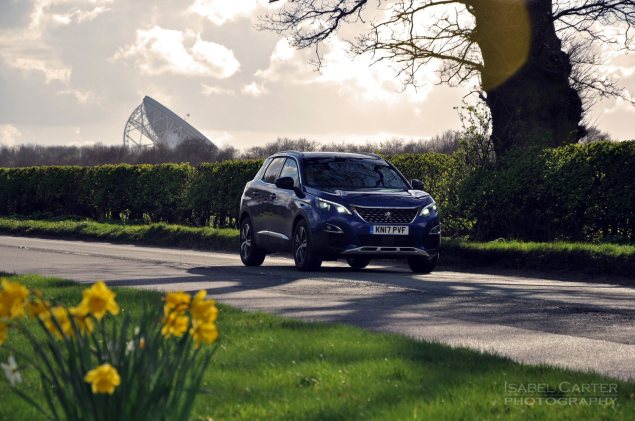 With people-carrying MPVs no longer in vogue and nigh-on every manufacturer under the sun pumping out crossover SUVs, Peugeot has predictably taken this route with the all-new 3008 – and it’s certainly a stylish thing, undeniably more attractive than its predecessor. The bewildering, busy array of angles used in its exterior design admittedly smacks of an overzealous child let loose with a geometry set for the first time, but the snarling grille, butch overall silhouette, floating roofline and striking front and rear LEDs combine to give the latest Gallic crossover considerable road presence and street cred, especially in comparison to much blander rivals like the CR-V, Kadjar and Qashqai. GT Line and GT trims unsurprisingly carry more impact and finishing touches, but even in Active and Allure trims, Magnetic Blue is a fabulous colour choice. 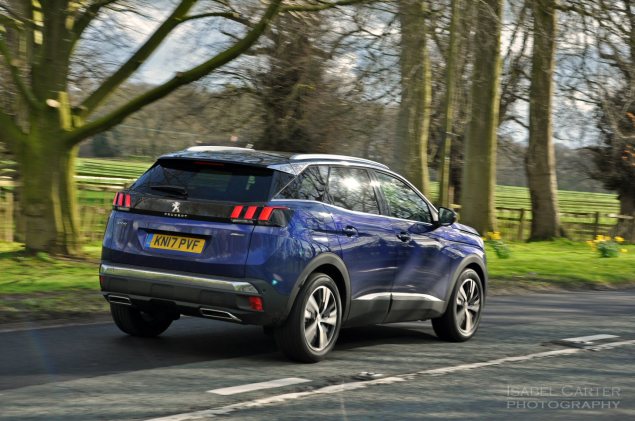 Inside, it’s the same story, with what looks like every conceivable angle and shape incorporated somewhere, but aside from offending art critics and minimalists, it all works rather well. The cockpit-esque, driver-focussed dashboard ethos and seating position have been carried over from the original 3008, as have the piano-like toggle switches which, once mastered, prove more intuitive than in cars where all functions have been farmed off to the infotainment touchscreen.

Comfort levels are superb sat in the front, although drivers of around 5ft are likely to find the driving position, pedals and controls a struggle. In the rear, there’s not quite as much room inside in comparison to an Ateca, Kadjar or Qashqai, especially if the optional panoramic roof is ordered, and the seat bench is starkly upright, denting comfort somewhat. The Peugeot’s ‘Imila’ part-leather seats are of debatable worth compared with full cloth or leather equivalents, the leather strip between one’s legs potentially vulnerable to wear and tear, but the cloth material echoed on the dashboard and door cards is a pleasant touch.

The touchscreen’s position is intuitive and safety-conscious, the central cubby beneath the front armrest is dictionary-swallowing in enormity, mood lighting gives the interior a warm and special atmosphere, and the ability to enter pretty much anything including shop and restaurant names into the excellent sat nav is very welcome. Considering the original 3008’s reputation for space and practicality, it’s a shame that Peugeot hasn’t fitted a double glove box, but the 520/1,580-litre boot gobbled up a brace of IKEA drawer units effortlessly, the rear seats fold down with quick-release levers, and the front passenger seat also folds down for accommodating longer loads. Retaining the split tailgate would have been welcome, but at least the new one is button or foot-operated, making light work for families. Additionally, in a nod to the original, the new model’s boot floor slides out to form a seat.

Left wanting for nothing technologically, the new 3008’s cabin with standard-fit, Audi-esque i-cockpit virtual instrumentation has a lot to offer business and family drivers alike, but the Bluetooth telephone system seems to struggle with call quality, and long-term interior durability is questionable in light of some patchy build quality and random fault lights. Approached optimistically, though, it’s a remarkably comfortable, spacious, ultra-modern and practical crossover with some charming quirks such as the steering wheel that is flat not just on the bottom but also the top, aiding dial visibility.

Against a backdrop of increasing animosity towards diesel vehicles, a clutch of 3008 buyers and leasers, particularly in the private rather than business market, may be tempted to explore plumping for a petrol model. And with the 1.2-litre PureTech gasoline lump, motorists with a zesty driving style won’t necessarily be disappointed. Producing an undeniably modest 131bhp and 230 Nm torque, and taking a whisker under 11 seconds to hit 62mph, the 3-cylinder engine unsurprisingly isn’t capable of propelling this sizeable vehicle along at any pace, especially if carrying passengers and/or hefty loads. The rorty warble it emits, though, can really stoke up the enthusiasm to drive the car sportily. Provided one remains aware of the 1.2’s limited overtaking capabilities from a rolling start, it’s definitely still possible to eke many a smile out of the new French crossover, accompanied by a pleasing thrum. The Sport button does all the usual things such as increase the throttle response and sharpen the steering, but the default settings are preferable most of the time. Driven more sedately, the engine proves remarkably hushed, and achieving combined fuel economy of around 48-50mpg against the official 52.5mpg figure is easily doable, equating to 450-500 miles per tank in mixed real-world driving. 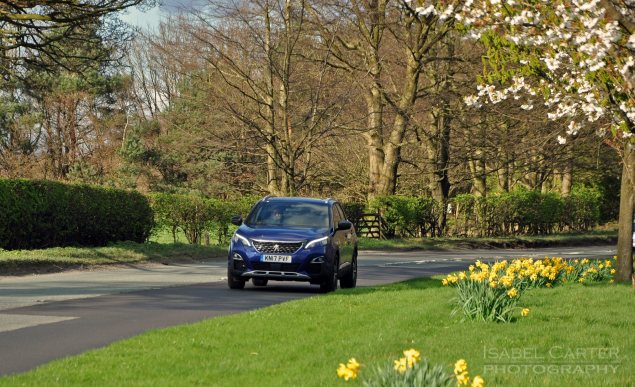 The 6-speed manual gearbox is notch-free and makes snicking up through the gears most pleasurable, although presumably Peugeot didn’t intend for the stick to flick backwards and forwards in rather phallic fashion under acceleration and deceleration, with engine vibration noticeably felt through it when operated. With a light feel in urban scenarios, the steering firms up well at speed, and although the new 3008 doesn’t seek to pretend to offer sporty handling with much feedback, it actually responds precisely to changes in direction, and corners relatively impressively, body roll kept in check well. This is influenced considerably by the long-term penchant of French car manufacturers for producing cars with suspension systems optimised for a comfortable, cushioned ride. Speed bumps, potholes and poor road surfaces are dealt with exceptionally by the Peugeot, meaning that families, school-run parents and retired drivers will all find the overall experience entirely agreeable.

With automatic emergency braking, active blind spot detection, lane-keeping technologies, driver attention alert and a wealth of other protective systems on offer, many of them fitted as standard on Allure trim upwards, the new Peugeot 3008 is highly reassuring in the safety stakes, too, and comes with a 5-star Euro NCAP score.

Fleet managers along with other business and indeed private drivers will note the Pug’s CO2 emissions of 117g/km in the knowledge that April saw a standard road tax rate of £140 introduced for year two onwards, so of more relevance is the new 3008’s first year VED of £160. Peugeot’s reputation for reliability has lifted somewhat in recent years, although the three-year warranty provided on the 3008 encompasses a mileage cap in the third year and can’t hold a candle to Kia’s 7-year package, or even the Kadjar, with an unlimited four years of cover. 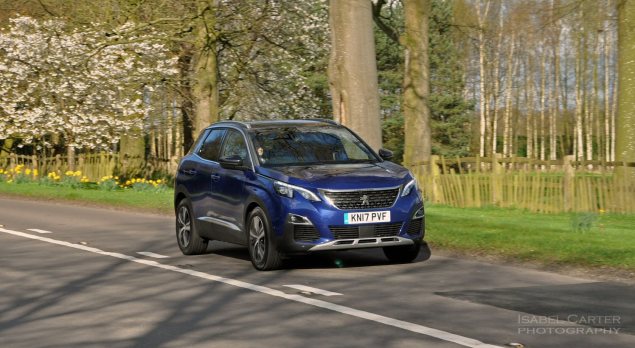 With retail prices kicking off at £21,955 for Active trim and commencing at £25,655 for GT Line trim as reviewed, the test mule totted up to a smidgen under £30,000 on the road, which will no doubt make some businesses and individuals wince or even chortle. It’s worth remembering, though, that although a few areas of the 3008’s futuristic interior may have escaped quality checks and it doesn’t offer the revered finish of an Audi Q3 or equivalent, a bewildering array of safety, infotainment, convenience and other technologies is reflected in the French crossover’s actually quite generous price.

Cargo trouser sentiments well and truly ditched, the new Peugeot 3008 in GT Line guise oozes French sexiness inside and out, excels in comfort and refinement, comes fitted with most things bar the kitchen sink when specified in higher trims, and the 1.2-litre petrol variant is a lovable pick for families and business lease customers in pursuit of a reasonably spacious crossover with a focus on frugality rather than performance. The new 3008 faces an army of rivals, but perhaps French style will once again win many hearts.