Crash helmets. Handrails. Protective goggles. Safety and sexiness seldom coexist. The new Honda Civic, though, manages to combine both elements. It’s one of the safest hatchbacks on the market yet has arresting looks that fail to excite very few people, most crick-necked beholders mistaking the Rallye Red EX Dynamic-spec’ 1-litre test car for a Type-R. Compared with previous Civic generations, which now look bland in comparison, the new one is positively raunchy. If this was how the Civic was introduced in the seventies anywhere up to the noughties, prudish onlookers would’ve been covering their eyes and customers having them delivered on flatbeds, shrouded in brown paper. 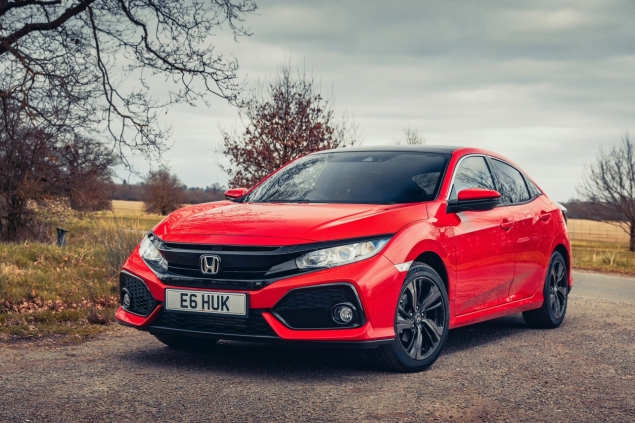 Wider, longer and menacingly lower than any previous Civic incarnation, the tenth-generation version in EX trim oozes athleticism with beefy air intakes and outlets, a short front overhang, sleek and high-tech LED headlights and rakish side contouring that bleeds nicely into a very distinct and modern rear complete with a floating spoiler. Designing a car’s front grille to protrude so unashamedly would normally be flagged as a faux pas but actually adds to the new Civic’s attraction, while housing some of its safety systems. 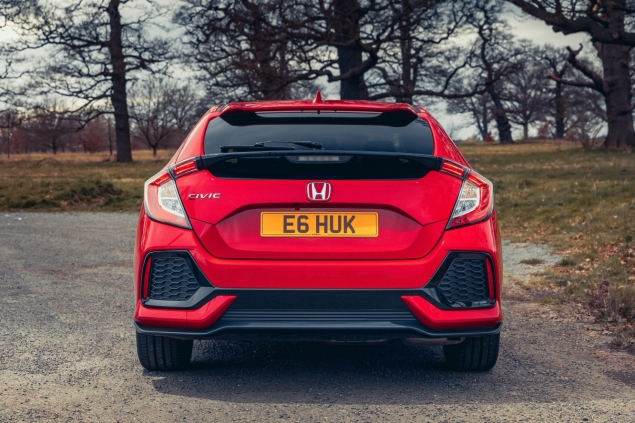 Rallye Red isn’t the choice for shy and retiring types but boy does it work well with the smoulderingly dark alloys. Other than the rear three-quarters view that looks slightly ungainly, Honda has sculpted a design that is generally very successful indeed, with echoes of the preceding two generations at the rear. 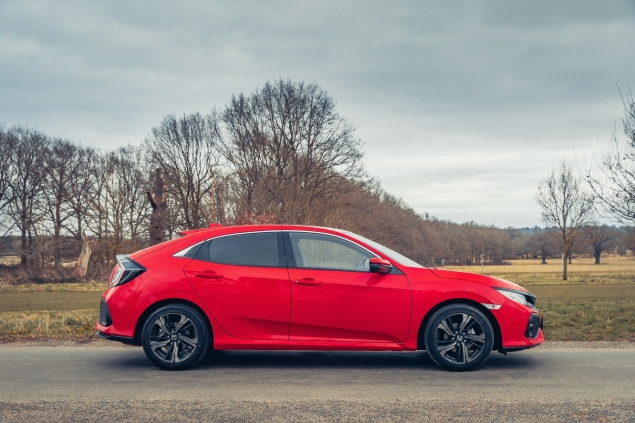 Civic loyalists will be keen to know that the new version’s increased dimensions translate into a more spacious cabin, while the low-slung driving position complete with a lovely view of the bonnet’s corner bulges at the front and the purposeful hips at the back heightens the sense of driver engagement. The front seats are comfortable on long journeys and there’s decent head, shoulder and legroom in the back for all but the tallest or widest of passengers. The tenth-gen’ Civic’s steering wheel feels typically tactile and the car’s controls are by and large ergonomically sensible and of a decent quality, but compared to German and even some other rivals, the cabin is a tad plasticy in noticeable places let alone its nooks and crannies. It all looks quite stylish even if it lacks artistic flair, though, and leather upholstery is well worth going for. Some drivers may find the touchscreen infotainment system surprisingly unintuitive, but the high-powered 11-speaker audio system sounds excellent and options like the rear parking camera along with strong standard levels of connectivity are most welcome. Smartphone addicts will appreciate the optionally-fitted Tech Pack’s wireless charging pad, while the clever Brake Hold system takes some of the stress out of stop-start driving on inclines and the like. 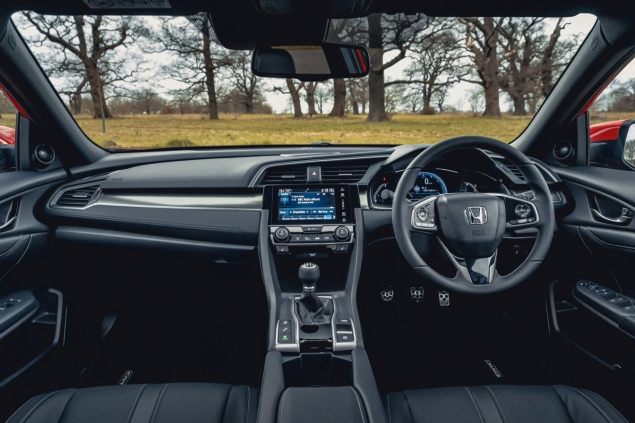 Honda has long been known for its remarkable ability to eke out seemingly incongruous volumes of boot capacity and the latest 2017 Civic carries over its forerunners’ hidden underfloor boot compartment ethos. With the rear seats in use, the load area of 478 litres to the window line trumps the Golf and many other hatchbacks, expanding to 550 litres if the boot is filled to the roofline. Stats with the back seats flattened are 828 litres to the window line and 1,267 litres to the roof. The hidden underfloor compartment provides an extra 64 litres, cementing the Japanese hatch’s position as the most practical in its class. Even the cupholders are impressively large. 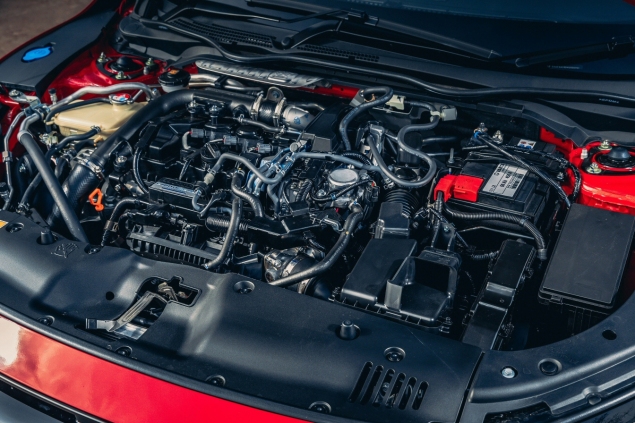 Wind the clocks back a mere decade and one-litre engines were often sniggered at, but they’re decidedly de rigueur these days and Honda’s three-cylinder turbo unit suits the new Civic very nicely indeed. Anyone coming from a previous 1.8-litre VTEC Civic will be impressed at the low and mid-range torque on offer from the new engine, which is a tiddler in numeric terms only. British roads aren’t exactly conducive to high-speed driving, much of the thrill derived from twists, turns and bursts of power, which the Civic 1.0-litre handles admirably. Peak power of 129bhp and torque of 200Nm at 2,250rpm is enough to enjoy the generally refined powerplant’s tell-tale 3-cylinder thrum under hard acceleration, and although the 6-speed manual gearbox feels a little notchy at times, it actually adds to the old-school feel of the Civic from the driver’s perspective in terms of engagement.

Thanks also to its lightweight composition, rigid platform, completely new suspension, Agile Handling Assist and other clever engineering contributions it’s fair to say that this is indeed the most engaging Civic yet in standard non-Type-R guise. The sizeable ECO button will be a familiar sight to anyone who’s driven a Honda before and instils a sense of environmental pride, allied by a green hue around the instruments. The car’s Adaptive Damping System enables its characteristics to be switched from normal into dynamic mode, which unsurprisingly tightens everything up and makes inputs more sensitive, resulting in a slightly more chuckable and sporty driving experience. 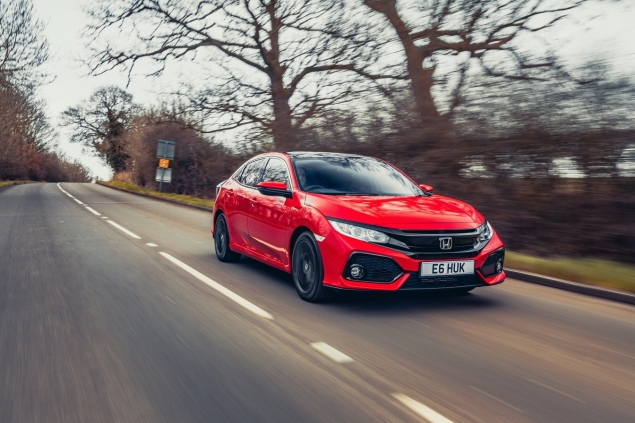 In everyday conditions, the new Civic can’t be faulted, even its relatively firm ride in EX guise not proving overly off-putting. Rear visibility when manoeuvring is fortunately augmented by a reserving camera, while its usefully neat turning circle helps it get out of dodge in tight car parks. Driving zestfully on each and every journey will reap combined fuel consumption in the mid-40s but by driving steadily it’s possible to average in the high-40s, an impressive real-life performance against its published figure of 55.4mpg. With a manual gearbox, the 2017 Civic emits 117g/km CO2 in EX trim, so company car fleet managers and user-choosers may be interested in knowing that the CVT version trims the nasties down to 114g/km in EX spec’ and all the way down to 106g/km as an ‘S’ variant. Diesel power will soon be introduced to the new Civic but except for high mileage private drivers, or business motorists with the logistics and HR departments to justify it, the 1-litre petrol model will more than satisfy the majority who take the plunge. 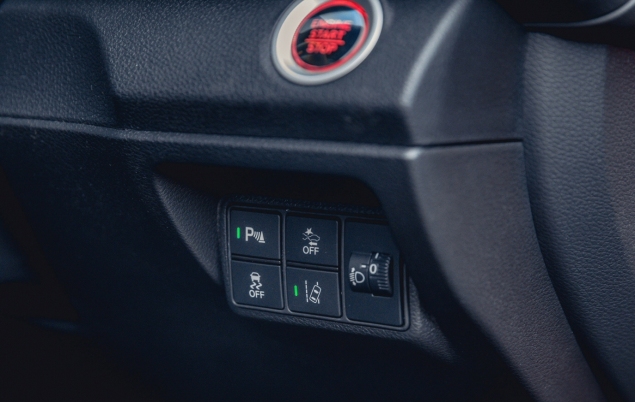 Although the new Civic received a four-star EURO NCAP safety rating, what’s impressive is that Honda doesn’t believe in making anyone pay extra for optional safety features, which means that its SENSING suite of active and passive safety features is fitted as standard across the entire Civic range. 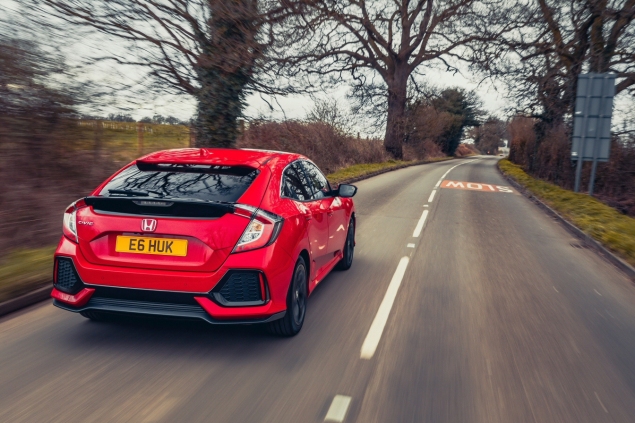 With sexy styling, a safety focus, a comfortable and reasonably upmarket interior, excellent luggage space, a lovable engine, an engaging chassis and pretty good real-world petrol efficiency, the tenth-generation Civic for 2017 certainly possesses all the right qualities. Combine Honda’s revered reputation for reliability with the car’s futuristic styling and the Japanese newcomer is certainly a more emotional prospect than say a Golf or an Astra. At £23,200 as tested it’s comparatively good value, too, all these factors hopefully helping the non-Type-R Civic attract a younger audience. What’s more, it’s built in Britain, which may swing some driver’s votes depending on how Mrs May, Mr Davis et al get on over the coming weeks.