A number of realisations set the stage ahead of my week in the company of Volvo’s all-new XC60. The UK’s roads are in an increasingly poor state and become more congested with each year that goes by, while diesel remains a popular choice for fleets and indeed the most sensible one for high-mileage drivers despite the widespread push towards hybrid and electric cars. Does Volvo’s mid-size luxury SUV fit the bill against this backdrop and make a distinct case for itself in such a competitive sector? 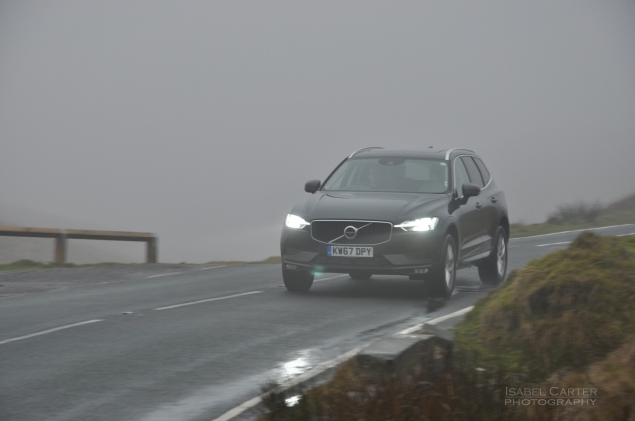 The majority of marques could be labelled as guilty of Russian doll design to an extent but taking a moment to properly contemplate the all-new XC60 in the flesh reveals that it’s not just simply a lazily shrunken iteration of the widely-admired XC90.

While its face incorporates the same gorgeous Thor’s hammer daytime running lights, they extend all the way to the grille which has a slight pout about it. The XC60’s bonnet, headlight units, bumper and overall look are more curvaceously sporty albeit relatively, in Sweden’s typically reserved manner. Its side creases are more pronounced, the windscreen is raked much more sharply and the rear window flicks upwards exuberantly, complemented by a distinctive, protruding rear.

With plenty of welcome nods to the original XC60, the new model visually separates itself from its XC90 big brother most noticeably at the rear. Volvo’s now traditional horizontal taillight units have been extended at the bottom to each bleed a quarter of the way across the rear à la V90, and their LED lighting signature is eye-catching and sophisticated. My test car was shod with 18” 5 Y-spoke alloys, which aren’t the prettiest wheels and don’t suit it as well as the optional 18” 5 double spoke alternatives or the larger rims of trims like R-Design Pro, which go all the way up to 21” in diameter. They are, though, ideal for the UK’s potholed roads, soaking up craters and mounds well with their 235/60 tyres. Pine Grey isn’t likely to prove one of the most popular palette picks but looks classy and has a subtle green hue to it.

As a combined package, the sculpted and timelessly-designed all-new XC60 is positively gorgeous and substantially more distinct than many of its more pedestrianly-styled rivals, aptly bridging the gap between the bulkier and somewhat boxier XC90 and the youthful, edgy XC40 newcomer. 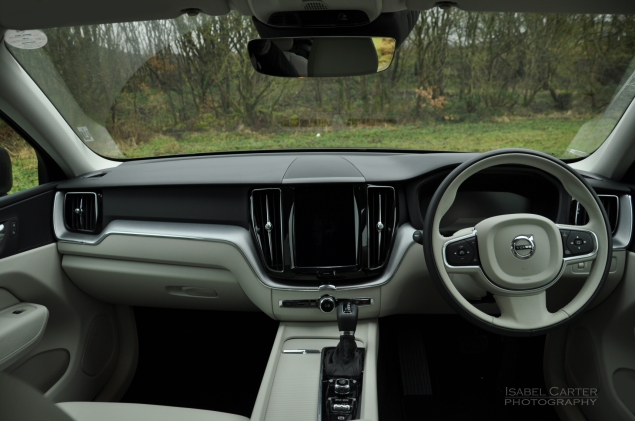 Not wanting to cause anyone to spill their skinny latte in disbelief, but the new XC60’s interior has edged in front of its bigger brother. Delightful little touches like Volvo’s unique ignition switch, diamond-cut driving mode toggle and the Swedish flags stitched into the driver’s seat and etched into the dashboard are superfluous but instil a healthy dose of wellbeing, and the minimalist vertical chrome air vents carried over from the V90 ooze elegance – but it’s the execution of the mid-size crossover’s dashboard that gives it the edge. Its fascia appears far less bulbous and stark, and the awkward interaction with adjacent trims is no more, a bold and cohesive inlay flowing from the corner air vents and above the glovebox and then swooping down under the glove-friendly 9” touchscreen area before flowing up behind the steering wheel. While transferring most of a car’s functions to a touchscreen makes the interior more pleasant in visual terms, it can prove fiddly and distracting to adjust the climate temperature while on the move, for example, and it’s not uncommon to accidentally swipe instead of press the tablet-like screen depending on the length of one’s arms. 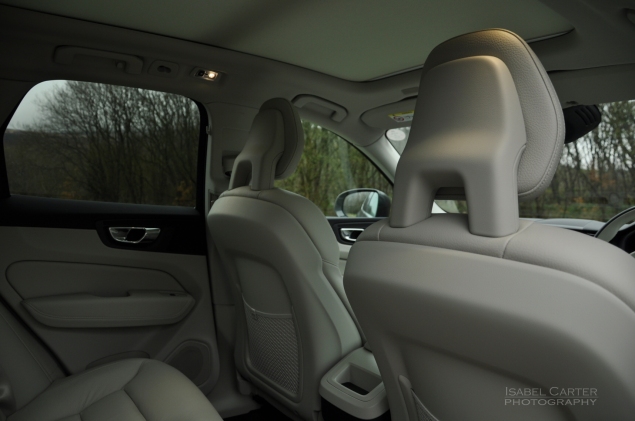 The XC60’s cabin looks remarkable in light-coloured Amber leather and is backed by supreme levels of comfort that will startle anyone unfamiliar with Volvo interiors. The £2,000 Xenium Pack fitted to the test car includes a power glass tilt and slide panoramic sunroof with sun curtain, which bathes the butter-soft leather seats in enhanced levels of light. Outermost rear passengers will enjoy the plentiful headroom and expansive view out of the windows, although the central seat is somewhat firm and suited primarily for occasional use, and legroom is also fairly poor. It’s not possible to adjust the height of the rear headrests, and the back seats can’t be upgraded to 40:20:40 splitting, but they do fold in a 60:40 configuration. The Volvo’s 635-litre boot is only fractionally less cavernous than the Jaguar F-Pace’s 650 litres and looks and feels impressively spacious, with no awkward lip to navigate. Storage around the cabin is a strong point, from the central cubby to the door bins, and Volvo has even incorporated specific tablet and smartphone pockets under the back seats. 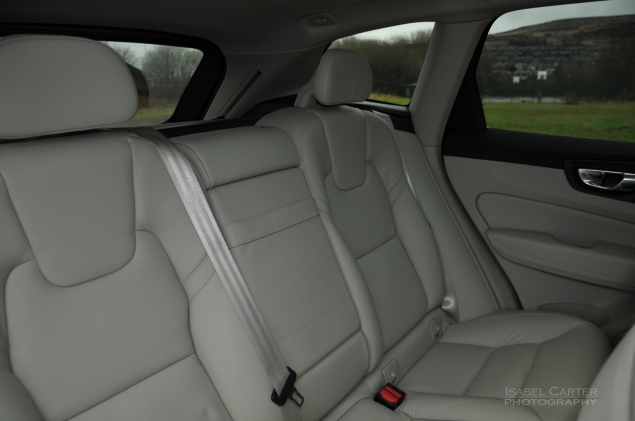 Every XC60 comes with Sensus Navigation complete with lifetime European map updates, Sensus Connect that can even book the car’s next service, LED headlights with active high beam which really do light up the road superbly well, and heated front seats.

Officially the safest car money can buy, the new XC60’s IntelliSafe Standard safety suite is mesmerizingly comprehensive and comprises highlights like Oncoming Lane Mitigation that automatically steers the car to avert hazards, automatic braking after a collision, and adaptive cruise control to name just a handful. Volvo is one of the world’s most prominent driverless car pioneers and some of its technological capabilities have trickled through to models like the XC60, the £1,500 IntelliSafe Pro upgrade including Pilot Assist that brings semi-autonomous driving to speeds of upto 80mph. Cross Traffic Alert and Rear Collision Mitigation are reassuring for safety-conscious parents and fleet managers alike, and the aforementioned Xenium pack’s 360-degree surround view parking camera system is brilliantly crisp and helps enormously with parking duties in tight urban spots. 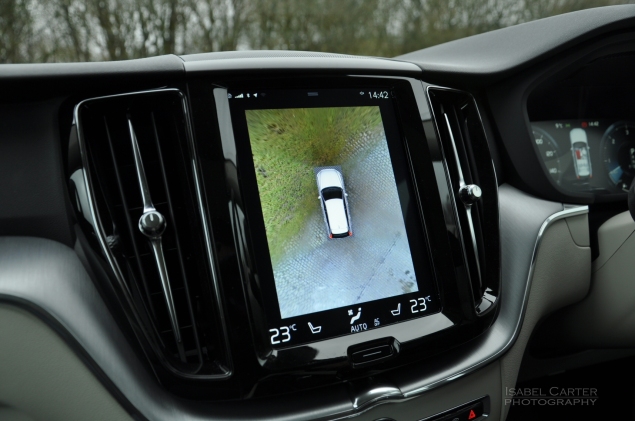 Apart from the cabin’s somewhat disappointing rear legroom, firm central seat and ineffective netted seat pockets, the only other gripe is that Android Auto and Apple CarPlay are only supported through a £300 option and are optimised for landscape screens, hence not working their best in the Volvo anyway. Barrel-scraping aside, the new XC60’s interior is sumptuous and technologically impressive, presenting a refreshing alternative to the near-perfect but a trifle sombre approach of leading purveyors, Audi.

The week testing the new XC60 unsurprisingly coincided with cold January temperatures so the car’s preconditioning feature and heated windscreen proved most welcome. I had purposefully declined the T8 hybrid model in favour of the entry-level D4 diesel which is likely to remain the most popular variant among business fleet and personal lease customers. 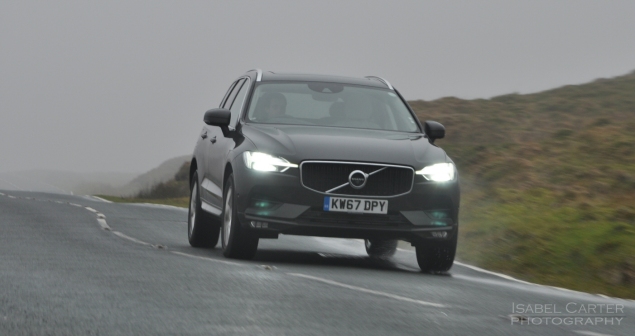 It’s not the most refined diesel unit at low speeds, sounding rather gruff when pulling off and during periods of more vigorous acceleration, but it quietens down nicely on A-roads and motorways. Lag is noticeable in Eco mode, which doesn’t have much of a positive impact on fuel economy, so leaving the XC60 in Comfort mode will suit most drivers just fine. Throttle response is beefed up heartily in Dynamic mode and although the XC60 D4’s nature can never be described as especially exciting, there’s enough urgency there to satiate the average UK motorist.

While the car’s currently peerless safety credentials provide a strong answer to the UK’s congested and hence dangerous roads, its relaxed ride is the perfect antidote to the poor state they’re in. The suspension on R-Sport variants of the new XC60 is stiffened up for more spirited driving, while optional air suspension can be specified, but in standard Momentum Pro guise, Volvo’s mid-size crossover is a joy to pilot around with the acceptance that its focus is on comfort and not agility. That said, it’s no blancmange and can be ushered around bends with surprisingly little body-roll. 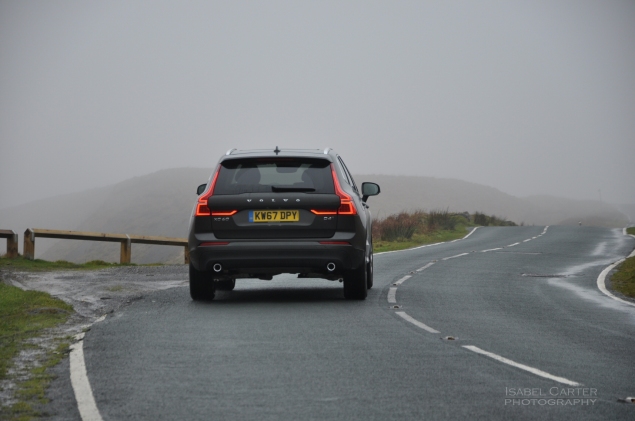 Motorway cruising is the XC60 D4’s forte, the 8-speed torque convertor transmission and likeable 4-cylinder engine cooperating harmoniously. On paper, Volvo says it can achieve upto 55.4mpg in fuel economy. Bearing in mind the test model only had a few hundred miles under its belt on delivery, the 42.4mpg it finished the wintry week of very mixed driving on is actually pretty good. Emissions of 133g/km CO2 translate to a first year road tax rate of £200 followed by the £140 standard rate in subsequent years. As a quick comparison, D4 Momentum Pro prices start at £39,005 while the T8 hybrid variant kicks off at £56,995 and because of this attracts the higher rate of road tax, meaning £440 per year VED from the 2nd to the 6th year inclusive. Meanwhile, away from any obsessively eco-minded T8 drivers who charge their cars regularly, many drivers are reporting average real-world fuel economy in the high-40s or low-50s from their XC60 hybrids. Granted, the D4 is a tortoise compared to the hare-like T8, but unless performance is top of your list, the basic diesel in the range still makes a strong argument for itself.

If you’re someone who loves hurtling around life at a million miles an hour, good for you – the BMW X3, Jaguar F-Pace and Porsche Macan will be more up your street. If, though, today’s hectic world of frenetic school runs, chasing social media ‘likes’ and making it back home from the office in time for tea amid relentless traffic has left you yearning for pampering, indulgence and relaxation, Volvo’s excellent new XC60 ticks all the boxes.