The theme with any RS-badged Ford seems to be outright trickery. The very first Ford Focus RS model was front-wheel drive and arrived on UK roads back in 2002, complete with wider bodywork to its standard variant and a Quaife limited-slip differential and increased power to shock the masses. The Mk2 came in 2009 – again with front-drive and an increased power of 301bhp, along with an added Quaife diff and RevoKnuckle front suspension. Seven years on, and here you have the Mk3. And if the other variants shocked the masses, it was inevitable that this one would, too.

Styling wise, the Essex-boy Gary in me finds it somewhat underwhelming. Take the Mk2, for example – pure ‘chav’ and I love it! Current (loose) rival in the Civic Type R is so lairy with its aesthetic and the RS in comparison looks a bit tame. The body is based on the standard Focus. Photographed from the front you see RS and again from the back, thanks to that big ‘wang’, but shoot it from the side and, well, it looks like any other Focus. Maybe some flared arches would do the trick… 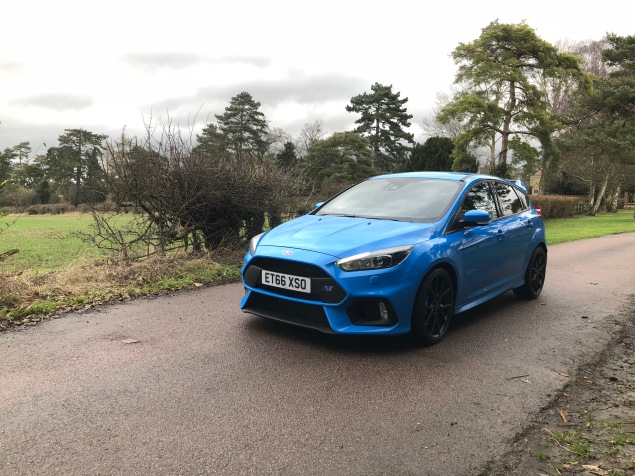 Anyway, upon getting into the car; the RS Recaro bucket seats are – as Del Boy would say – Cushty. They’re so figure hugging, you don’t want to get out. As they’re bucket seats, you’re unable to adjust the level in which the seat sits at and to be honest they do sit a little on the high side. You can, however, adjust the reach and the back of it, giving you as much tilt as you so desire. In a car like this, though, I’m the sort of person to sit pretty close to the wheel – nothing to do with having short legs, I promise – and with a relatively upright back position, with my bum positioned firmly to the back of the seat. Plastics aren’t the best, however, but you do get everything you need, such as good storage and a couple of USB ports. Also inside, is a shed load of blue stitching, rear view camera and three gauges that sit on top of the dashboard (much like the ST model). You also get Ford’s Sync 3 system, meaning you get an 8-inch touchscreen display, satnav, smartphone compatibility, DAB radio and Bluetooth, along with ten Sony speakers. None of that matters, though. I challenge anyone that has bought a Ford Focus RS to say that they bought it based on its looks or interior. The reason you buy this car is for the running gear.

As I press the start button nothing is really happening deep within me. It’s when you finally get to that country road just outside of your town that it all clicks. And it doesn’t just click, it punches you in the baby maker. A good hard, winding blow, in the best possible way! Changing down to second for that upcoming tight bend, pulling through it with gradual acceleration to change up to third for that beautiful release of pops. Some people get addicted to alcohol, to cigarettes, I am now fully addicted to that popping and I’m not ashamed to say it. The gearbox is super smooth and quick, and acceleration is immediate. The Brembo brakes are a much-needed addition, too, giving you 100% confidence in its stopping power should someone pull out on you when you’re just getting ‘into it’. The flat-bottom steering wheel is a good size, with  a very comfortable quarter to three position, once you’ve set the reach and rake just right. 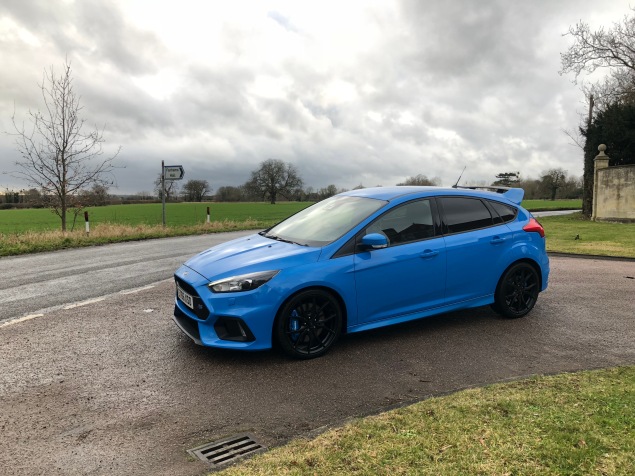 The car is powered by a turbocharged version of the four-cylinder 2.3-litre Ecoboost unit from the Mustang model. And, thanks to Cosworth, it now makes 345bhp and 325lb.ft of torque. The drivetrain and suspension is what wows, though. The RS takes corners like an absolute dream. The RS just oozes driver connection. This one, though, isn’t front wheel drive like its predecessors. It’s four-wheel drive, and not just any four-wheel drive system to boot. Unlike rival systems seen in the likes of the Volkswagen Golf R and Mercedes AMG A45, it’s not just front-led. It cleverly pushes up to 70% of torque straight to the rear when you need it. The rear drive module then sends up to 100% of that torque to either of the two rear wheels. It’s that torque split that slays. Coming out of any corner at relatively high speed In any mode will have you experiencing some light sideways action. The four-wheel drive system then distributes power back to the front to take itself out of the corner. So then, does it even need drift mode? Probably not. It does sound cool, but all the drive mode (selectable via the drive mode button to the centre console) do similar. The Tenneco adaptive dampers come as standard and increase damper rate by 40% in Sport and Track modes. As the first fast Focus to have four-wheel drive, Ford revised the rear subframe that it once developed for Volvo (in the all-wheel drive C30 model), with added torsional body stiffness.

People will ask; “why don’t they do an automatic version?”, but the six-speed manual gearbox puts the car firmly back in the driver’s hands. Yes, a Mercedes AMG A45 will launch quicker, thanks to its seven-speed dual-clutch system, but will it be as fun getting there; possibly not.

And, despite the glorious addition of the four-wheel drive, space inside the RS is respectable, seating five adults comfortably. Boot space, however, is slightly affected over the standard model due to the revised rear axle. Boot space equates to 260-litres.

If the aforementioned power levels aren’t enough for you, tuning specialists such as Mountune and American performance company Hennessey have both created upgrade packs taking power to 370bhp and 405bhp respectively – at a cost, of course!

In terms of running costs, be prepared! You’ll be lucky to get 20mpg out of it. The temptation to always drive in Sport mode is just too great. In terms of emissions; it’s not as bad as you’d think, for a car of this type and its power output, at just 175g/km of CO2.

And that’s the Mk3 Ford Focus RS. It’s incredibly engaging, road-focused and above all fun! Think Nissan GT-R at a fraction of the price! Yes, there’s the odd teeny weeny niggle; the interior could be better, you’ll be forever fuelling up, but I wouldn’t mind a bit. The initial cost of this car is an absolute bargain for what you get, the added running costs can be overlooked for the sheer fun you have with it. The Ford Focus RS is a cracking affordable driver’s car and one I’d love to have on my drive. I think I’d have to widen the arches, though…