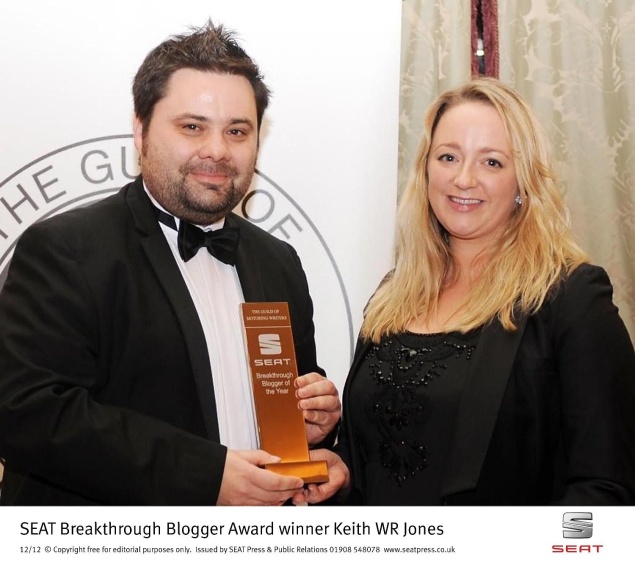 The prize, sponsored by SEAT and awarded by the Guild of Motoring Writers (GOMW), was handed to Keith during the 2012 GOMW Annual Dinner earlier in December, held in the majestic surroundings of the RAC Club, London.

Keith, a 36-year-old Head of Sixth Form at a Lincoln academy, blogged his way past some of the best emerging talent in the motoring industry to become 2012’s Breakthrough Blogger – a prize whose aim is to shine a spotlight on those writers who operate in a medium that is traditionally under the radar.

Judged by GOMW Chairman Richard Aucock and SEAT Head of Press & PR Juliet Carrington, the winner had to display the positive qualities associated with the best established motoring journalists – enthusiasm for all things motoring and a flair for the written word – alongside the sort of creativity and idiosyncrasy that a personal blog accommodates.

Keith’s work displays all those qualities consistently, which is why he took away the first place trophy and a brand new iPad. He was run very close by Gavin Braithwaite-Smith, however, who bagged a commendation from SEAT and a car from the company press fleet for one week.

Juliet Carrington said: “We’re delighted for Keith and very happy that the first SEAT Breakthrough Blogger Award has gone to him. The uniqueness and attention to detail of his writing gives it real integrity and, most importantly, it’s consistently enjoyable to read.

“Engaging with bloggers is something that SEAT is already well known for and will continue to do in the future. The aim of this award is to help the very best gain the recognition they deserve, and give them a push towards a full-time career in motoring journalism.

“The response to this year’s award has been amazing; we certainly plan to bring the award back over the coming years, and make it one of the most eagerly anticipated and hotly contested categories at the Guild Awards.”

GOMW Chairman Richard Aucock added: “The shortlisted entrants show how professional automotive blogging can be, and the two finalists really do deserve to be on the radar of motoring publishers – if they aren’t already.

“Keith’s wonderful collection of writing tipped it in the end. He can cover varied subjects with effortless ease and– something crucial when blogging – make the hook from the first paragraph. He also demonstrates good awareness of social media channels and adapts his creativity accordingly.

“The Guild is proud to honour him with the inaugural Breakthrough Blogger of the Year Award.”

How do you find the time to keep your blog full of fresh content while doing your full-time job?

At times it can be difficult as you can’t precisely predict the volume of workload as a teacher. Essentially I write the blog and work on my forthcoming book, A-Z of Cars 1990-99, in my spare time, so the writing doesn’t impact directly on my teaching. The secret is working very late and publishing content during the day or early evening at times when people are more likely to read it than say, just after midnight when I might be actually finishing it off.

What are your ultimate aims for your blog?

My ultimate aim is that it continues to be a shop window for my talent and helps my transition into becoming a full time motoring writer. When that happens, I’ll keep running the blog, posting articles about how my career’s progressing.

Which websites, motoring or otherwise, inspire you?

I spend a lot of time reading online but sites which give me considerable pleasure and inspiration are PetrolBlog, CAR Magazine, Private Eye and Twitter. The microblogging content of the latter is so rich in inspiration that I’d struggle to be without it.

Do you consider yourself a writer first, car geek second, or vice versa? And either way, do you find that helps?

I’ve always been a car geek – clichéd to say but since I could walk and talk, cars have fascinated me. I’ve always been able to write engagingly but it was only in the past two years I’ve combined the two. Being able to write in a way that captures imaginations is vital, but that extra ounce of enthusiasm is what holds people there.

Are you finding that the car industry is becoming more receptive to the blogosphere, generally?

More and more manufacturers are, certainly. Some are still wary and keep a watching brief but companies who are happy to support tell me they believe they get a good return from my content. Over the past year I’ve reviewed cars costing less than £10,000 to over £400,000 and I pride myself in ensuring each receives a fair, balanced but enthusiastic review.

Do you think blogging is beginning to impact traditional motoring journalism, both online and in print, and how?

I suspect it is but it’s all part of this very grey area about where print media is going and how/when the news aspect of print will switch predominantly to online only. I think blogging is a great way of getting known and offering an alternate view but whether long term a good blog will ever have the gravitas of an established motoring title remains to be seen. Currently both can co-exist effectively.

How do you hope that the SEAT Breakthrough Blogger Award will advance your blog, and your career in the industry?

Well, as I plan to switch careers and become a full time motoring writer the Award is recognition from the Guild and SEAT as its sponsor, that I’ve displayed the potential to make a success of the career move. It’s a further door opener, beyond the growing reputation I have, and a validation and recognition of my ability.

If you could have anyone write a guest column for you, who would it be, and why?

Well, I understand he’s a car enthusiast as well as an art critic – and his voice is too much of an asset so he’d have to record a podcast rather than write a column – but I’d choose Brian Sewell.

Sum up your blog in three words