Go on, indulge yourself. Just for a moment or two imagine that the recession hasn’t hit you. You’re a captain of industry – not in the Alan Sugar or Bill Gates league but you’re doing nicely thank you – and you’re in the market for a new set of wheels. We’ll assume you’ve already done the whole Range Rover and SUV thing; nice but the running costs, even on your salary, proved pricey.

Audi’s A7 Sportback may look familiar from the front…

You’re looking for something stylish but a bit different, not the usual luxobarge executive saloon and you still want a car with enough kudos to cut a dash in the golf club car park.

Liam Bird considers whether or not Audi have the answer.

Large executive cars that aren’t easy to pigeonhole are nothing new: Mercedes have been building the CLS since 2004; BMW have their 5 Series GT and even Porsche claim a stake in the market with their shark-like (some say truck-like) Panamera. Let’s not forget that Jaguar’s XJ’s styling owes more to coupes than it does to saloons too. But I’d argue that Audi’s A7 Sportback is the prettiest of them all.

From the front it’s business as usual. Viewed from a rear view mirror the A7 could be well, just about any other Audi; same deep four-ringed grille; same headlamps; same everything. However should the A7 overtake, which inevitably it will, the differences between it and the A6 and A8 saloons soon become apparent.

…but its hatchback rear has shades of Rover SD1 about it.

From the A-pillar aft the A7 is 42mm longer and 56mm wider than the A6. It employs a longer wheelbase too, in order to free up some extra rear legroom. A shallower more modern looking, less saloon-like window line and neat Kamm tail with twin exhausts complete the A7’s fastback look. And that giant rear hatch conceals a decent sized boot – there’s even a small rear spoiler that rises at automatically at speed.

The A7 Sportback combines great looks and practicality. No rear wiper though.

Some of the external styling cues are carried over inside too. The shape of the rear windows is echoed in the inserts that house the door handles and, in the case of the 3.0 TDI SE model on test, the memory function buttons for the optional, infinitely adjustable, comfort seats. It’s even replicated on the knurled cold to-the-touch aluminium knobs for the radio and command system, which controls everything from the digital radio station setting to how heavy you want the steering to feel via Audi’s Drive Select system.

Superb build quality is fitted as standard to every A7.

Being an Audi the interior is a paragon to milli-metric precision and clarity of course – the use of materials in the gently swooping dash-board is exemplary. A word of advice though: avoid ticking the box on the options list marked Fine Grain Ash trim. Real wood? I’m not so sure. It serves only as a reminder that the Germans have a much better sense of humour than the British tabloids have ever given them credit for.

Should you opt for the 3.0-litre, 242bhp TDI engine whilst perusing that list though, your efforts will be rewarded with effortless performance. Not only does the V6 offer all that power and 427lb ft of torque, the combined mpg figure of 47.9mpg and a lowly 158g/km CO2 is pretty appealing too. 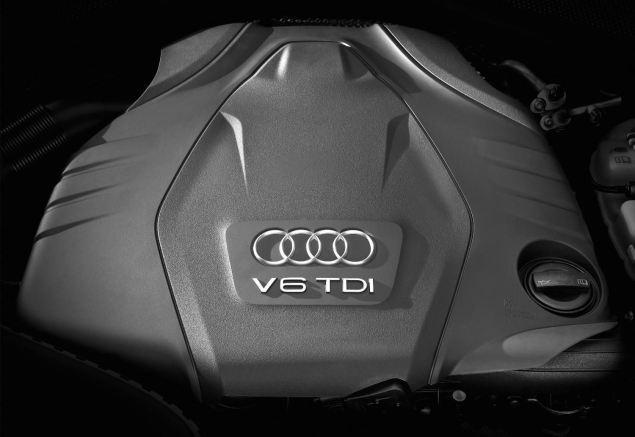 On the move, the A7 rides with a compliancy not usually associated with Audi’s of late, the cabin is beautifully insulated from any kind of noise, the quattro system means it grips like a limpet. Whether you choose to pick your own ratios or let the 8-speed Tiptronic automatic gearbox do it for you, the A7 presents itself as fine, if ultimately un-involving (thanks to steering that’s a tad numb), long distance mile muncher.

At prices from around the £41,000 mark, before you start adding any of the multitudes of available options, the A7 isn’t cheap. But its combination of quality, badge desirability and good looks means it’s got more than enough substance to go with its style.